Astrid Leitner studied veterinary medicine in Vienna. After ten years in veterinary practice and the birth of her daughter, she switched – more by chance – to medical journalism. It quickly became clear that her interest in medical topics and her love of writing were the perfect combination for her. Astrid Leitner lives with her daughter, dog and cat in Vienna and Upper Austria.

Aphonia is the strongest manifestation of hoarseness (dysphonia). The voice loses its tone, affected people can only whisper or breathe. The loss of voice is usually caused by physical reasons, sometimes it is also psychological. In most cases aphonia is curable. Read here how long it takes for the voice to return and how aphonia is treated. 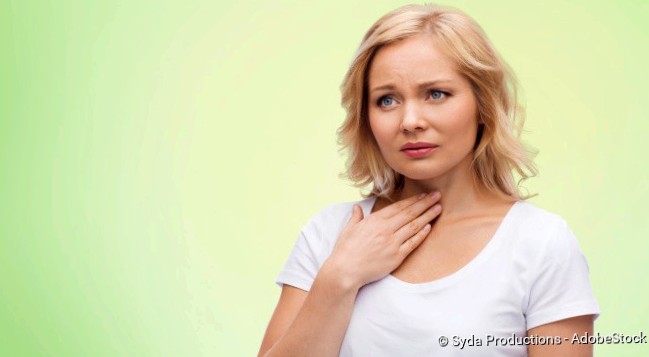 How long does the loss of voice last?

How long the voice loss lasts depends on its cause. Mostly a harmless cold is behind the loss of voice. In these cases, the best remedy is to rest the voice. It usually takes a few days until it comes back again.

Those who rely on their voice for professional reasons (such as teachers or singers) and overuse it may struggle with recurrent aphonia. Again, it is important to take care of the voice. In addition, voice training with a speech therapist helps to strengthen the voice and prevent recurrences.

In the case of tumors or nerve-related vocal cord damage, healing can take longer, in some cases even years. Complete paralysis of the vocal cords (as after a stroke or surgery) may be permanent in some circumstances.

The prognosis is basically good: the loss of voice is usually curable. In any case, it is advisable to consult a doctor soon after the onset of voice loss. This is especially true if the aphonia has psychological causes. The longer the voice loss goes untreated, the more prolonged the treatment will be.

If the voicelessness lasts longer than three weeks, it is advisable to see an ENT specialist or phoniatrist!

What to do when your voice is gone?

If the voice loses its tone, this is an alarm sign. It is advisable to act at the first symptoms to prevent worsening. If the cause of the loss of voice is unclear or if the voice remains gone for more than three weeks, a visit to the doctor is advisable. If the aphonia is accompanied by a respiratory infection, the following tips may help:

Additionally, the following home remedies can help with voicelessness:

Gargle with sage: Instead of salt, you can also use sage. Sage is believed to have antibacterial and anti-inflammatory properties. Either prepare a commercial sage tea or add a handful of fresh sage leaves to boiling water. Let the decoction steep for about five minutes before gargling.

Inhale with salt water: As an alternative to gargling, you can also inhale in case of voice loss. For this, bring about a liter of water to a boil and add a tablespoon of salt. Let the liquid cool down a bit (caution: danger of scalding!) Bend over the pot, and hold a towel over your head. Breathe in and out deeply, keep eyes closed. The water vapor penetrates deep into the respiratory tract and unfolds its effect there.

Throat compress: Throat compresses are a proven home remedy for colds. They can be applied warm or cold, or dry or moist, respectively. The principle is always the same: a cotton cloth is placed over the neck and covered and fixed with another cloth.

How to properly apply the throat compresses, read here.

Home remedies have their limits. If the discomfort persists for a long time, does not get better or even gets worse, you should always consult a doctor.

What helps against cough and no voice?

If aphonia and cough are present at the same time, it is usually due to acute laryngitis. Normally, it is harmless and heals by itself within a few days – provided that the patient really takes care of his voice. If other complaints such as fever or shortness of breath occur, a visit to the doctor is advisable. He will prescribe antipyretic and cough-relieving medications in addition to voice rest.

Treatment by the doctor

If the doctor determines a physical cause for the voice loss, he will initiate appropriate treatment.

If you have a cold or laryngitis, it is usually sufficient to rest your voice. If the patient has other complaints at the same time, such as sore throat or cough, the doctor usually treats symptomatically, for example with lozenges or cough suppressants. If there is a fever, the doctor prescribes antipyretics. Antibiotics are only used if the doctor detects a bacterial infection. If the cold heals, the voice will also return.

Surgery may be necessary for changes in the vocal folds, such as cysts or polyps. The same applies to papillomas (benign growths) and other tumors. After the operation the voice needs rest for some time. This is usually followed by voice therapy with a speech therapist. He helps with special exercises to rebuild normal voice function.

Overstrain of the voice: If the loss of voice occurs repeatedly due to work, voice training with a speech therapist is helpful. He can help to train the voice and to learn the correct breathing technique. Patients learn techniques that they can use independently at home. They strengthen the vocal cords and prevent relapses.

Psychogenic aphonia: In the case of psychogenic (or dissociative) aphonia, it is first important to find out what psychological causes have led to the loss of voice. For this, the doctor refers the patient to a psychotherapist. Ideally, this is also logopedically trained. In case of dissociative aphonia, the combination of psychotherapy and logotherapy is most effective.

It is important to start therapy at an early stage. Treatment of psychogenic aphonia may take some time.

Aphonia with psychological causes is also curable. Do not lose heart, in most cases the voice comes back again!

Voicelessness can have different causes. In most cases, it is harmless colds that cause the loss of voice. If the vocal cords no longer produce an audible sound, but in some cases there are also serious diseases behind it.

Common cold: Colds not infrequently cause irritation of the larynx. They are usually caused by viruses. Inflammation and swelling of the vocal cords can cause hoarseness and even aphonia. If the voice already sounds rough and hoarse and is not spared, it develops into aphonia: the voice disappears completely. Harmless colds usually heal by themselves after a few days.

Acute laryngitis: Laryngitis (acute laryngitis) usually begins with hoarseness and pain when swallowing, and sometimes fever occurs. Most often viruses cause laryngitis. If the voice is not spared, aphonia can develop. The inflamed and swollen vocal folds no longer produce a sound. The severe swelling in the area of the larynx can lead to shortness of breath. In children, this is called pseudocroup.

Chronic laryngitis: In the case of chronic laryngitis, the symptoms occur with varying severity for several weeks. Symptoms range from hoarseness to complete aphonia. In addition, there is a need to clear the throat, coughing and pain in the pharynx.

Diphtheria: Main features of diphtheria (true croup) are barking cough, hoarseness and loss of voice. Whistling sounds are audible when breathing in. Diphtheria rarely occurs nowadays because there is a vaccination against it. If diphtheria breaks out nevertheless, it is well treatable.

Polyps on the vocal folds: Polyps are mucosal growths. It is noticeable by hoarseness, a foreign body sensation and a compulsion to clear the throat. Affected are mainly smokers.

Injury to the larynx caused by intubation: Intubation is necessary when a patient cannot breathe on their own. This may be the case during surgery under general anesthesia or during rescue operations. To do this, the doctor inserts a breathing tube through the patient’s nose or mouth. He is artificially ventilated via the tube. In some cases, the vocal cords on the larynx may be injured when the tube is inserted.

Paralyzed vocal cords: Vocal cord paralysis can also cause aphonia. It is caused, for example, by a stroke or surgery in the area where the recurrent nerve (the nerve that controls the vocal folds) runs. This may be the case, for example, with interventions on the thyroid gland or inside the thorax. In the case of bilateral paralysis The glottis remains narrow, and the vocal folds cannot move apart.

Neurological diseases: Diseases such as Parkinson’s or multiple sclerosis that involve damage to the nerves can also affect the vocal folds and lead to aphonia.

If the voicelessness has no physical causes, it is called non-organic or functional aphonia.

It can result from overuse of the voice or have psychological causes. Affected persons are otherwise physically healthy. Before a doctor diagnoses functional aphonia, he or she first rules out physical causes.