Fish should be on the menu regularly. This is true for humans as well as for dogs. This anticipates the answer to the question of whether dogs are allowed to eat fish.

With raw fish you must pay attention to freshness. Dried fish and dog food with canned fish have a longer shelf life.

Fish is popular all over the world thanks to its high quality ingredients.

Depending on the species, fish contains up to 20 percent protein. This is easily digestible and provides a balanced composition of amino acids.

Fish with potatoes or rice is even for very sensitive dogs an optimal gentle food.

The fat contained in fish is also consistently well tolerated. It contains the important essential omega-3 and omega-6 fatty acids. They are vital for the dog, but cannot be produced by it.

Low-fat fish contain about one percent fat, while the content of fatty fish like eel can be as high as 24 percent.

In addition, fish contains a high proportion of vitamins of the B group, especially vitamin B-12. 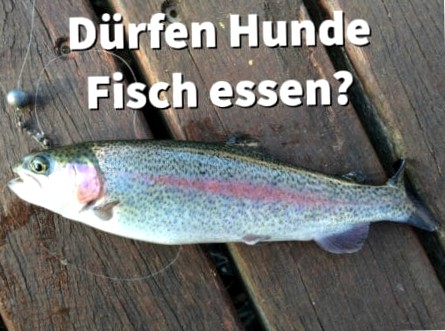 About 150 million tons of fish are produced annually by fishing and aquaculture. Of this, about 110 million tons are intended for human consumption.

Around 90 percent of fish come from the world’s oceans. Whereby the proportion of edible fish from fish farms and aquacultures is rising sharply to meet the enormous demand for fish.

Which fish is good for dogs?

Basically, a distinction is made between freshwater and marine fish.

However, due to untreated sewage that still ends up in the sea, sea fish can be contaminated with heavy metals such as mercury as well as pesticides.

This is not the only reason why the many positive properties of fish for dogs are countered by some concerns:

If you know an angler who can supply you with a recently caught trout, this fish is guaranteed to be fresh.

And probably you will not think of eating this trout as raw sushi. Rather, trout ends up in the pan.

How often can dogs eat fish?

In my opinion, the thiaminase issue in particular is often over-dramatized.

Thiaminase is an enzyme that splits vitamin B1 (thiamine). If you were to consume too much thiaminase with food, this would lead to a vitamin B1 deficiency.

This could have dramatic consequences and even lead to death. This connection was proven only in the year 1912 by several physicians.

However, thiaminase is destroyed during cooking. And even one raw trout a week wouldn’t kill a dog, as long as you maintain a balanced diet.

If you still fear a thiamine deficiency in your dog, you should discuss this with your veterinarian.

Are dogs allowed to eat fish with bones?

However, raw fish offers an advantage when you think about the bones. Because uncooked bones are softer and therefore easier for your dog to swallow.

In the normal metropolitan world, you are more likely to come into contact with frozen fish.

At first glance this does not sound as good as fresh fish. But have you ever wondered why you can now buy sushi on every supermarket shelf?.

Why no one dies from spoiled supermarket sushi? This is one of the benefits of frozen fish. The low temperatures kill parasites such as nematodes and tapeworm larvae.

It is sufficient to freeze the fish at -20 °C for 24 hours. This is what the British Food Standards Agency recommends.

The us Food& Drug Administration (FDA) goes a little further and recommends storage at -20 °C for at least seven days. Whereby the period is reduced to 15 hours at a temperature of -35 °C.

Fresh fish should never have an unpleasant odor. The meat must be firm. If the skin is still present, scales must not come off easily and the eyes must be crystal clear.

For dog food, mostly fish leftovers from sea fish such as pollock, salmon and cod are used.

Salmon, anchovies and other sea fish are sold dried and can be fed as a treat. Also the skin of fish is used with pleasure dried for dogs.