First picture of a black hole: "Look for God in space, Heino Falcke?" 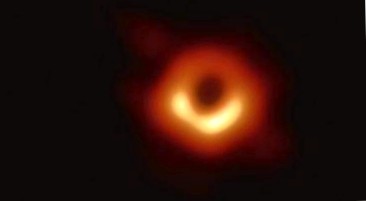 Prof. Falcke, more than two years ago you presented the first ever image of a black hole, located in the galaxy M87. What has happened since then?

We have found more new information in the data that tells us something about what the magnetic fields of the black hole look like. On our earth we have north and south pole, around a black hole however magnetic fields loop around, so to speak. These have dramatic effects, they cause plasma jets to be able to shoot out of the vicinity of a black hole again. This is quite contradictory.

Why is that contradictory?

Black holes are anyway the most contradictory objects in the whole universe. They contain the deepest dark and deepest black, but at the same time they are the brightest objects in the universe, because the gas around them becomes so bright. Besides, black holes swallow everything, even light. But they are, and this is our latest finding, also capable of ejecting matter before it falls in. This process is happening precisely with those magnetic fields that we were able to track down last year.

They say that plasma jets are catapulted out of the black hole again. But then is the original statement that everything that is pulled into the black hole disappears forever still true at all?

Yes! Until the matter in the black hole finally disappears, it still has a chance to escape. If you were there and about to fall in, it would be advisable to grab a magnetic field line and then hope that you will still be ejected. These magnetic fields are the last lifeline before the event horizon, after which everything disappears finally and irrevocably in the hole.

This reminds us of those moments when James Bond, when everything is already beyond repair, still manages to grab something, a piece of the helicopter or something similar.

Exactly. Or Tarzan, who catches some vine before he falls into the abyss.

With this knowledge of magnetic fields, is your research done for now?

No, we are only at the end of the first step. What is still missing, and where we will hopefully see the results in the next few months, is the answer to questions like: What does the center of our own Milky Way actually look like?? Is this really a black hole? We see the same as the black hole in M87? Or is it something completely different? This will be a very exciting time. And in the future, we don’t just want to photograph black holes, we want to make movies too.

Even movies? Is it possible with the same technique?

Yes. It will still take a few years. But it is possible. However, we need a few more telescopes for this, which is why we are currently building new ones all over the world, and this simply takes time.

“Lucy in the sky!”: First Nasa probe on its way to Jupiter asteroid

Sharper than ever: new asteroid images give clues to origin

Will these new telescopes then also make you less dependent on outside influences?

This is of course also a very important reason why we build new telescopes. When we were able to take the photo of the black hole in 2017, we were incredibly lucky. All telescopes worked, the weather was perfect. This does not normally happen. In 2018, we had to stop because there was a raid in Mexico. In 2019, technical problems meant we couldn’t observe. 2020 was Corona, and only in this year we could observe again properly. But even now the Mexico telescope is missing, because an upgrade has just been done, and such things take time.

Millions to billions of suns are being squeezed together

What is a black hole anyway?

Black holes consist of so much matter and mass that they have the most extreme gravitational pull in the universe, so great that even light can’t escape. The black holes are formed by the explosion of stars. In the centers of galaxies they grow to huge mass monsters, where millions to billions of suns are squeezed into a space smaller than our solar system, which then finally collapse to a point. Space and time then act around such a black hole like a waterfall against which one can no longer swim. And once you have flown over the cliff, you can’t come back again.

When you say that millions to billions of suns collapse to a point: Is that the reverse big bang, so to speak?

In a certain way yes. There are differences in details, but in fact in the center of black holes energy and matter are compressed in one point. At the big bang, so to speak, everything comes out of a point with positive energy. The conditions in a black hole are perhaps not completely different than the conditions at the beginning of the big bang. Only with reversed signs. 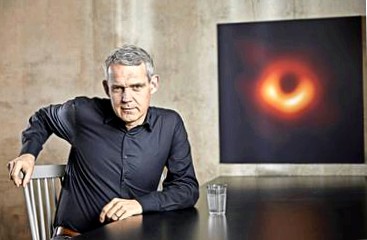 Let’s look again at your famous photo. When you say that everything is swallowed up, even the light, why can one see the nothing at all??

You cannot see the nothingness, but only the shadow of the black hole, so to speak. That was the clou, that we had found out in the nineties that at least certain black holes are surrounded by light, not only in the form of a disk, but that they are really surrounded by light everywhere. What we see then is the light of the gas around the black holes. The black hole is only distinguished by its shadow, you can see the light that is missing. This is the crucial point.

But what happens inside the black hole, we don’t know yet.

Yes, that is the big question. We can calculate it, but we cannot observe it. And that, of course, makes us physicists crazy, because there’s an incredibly fascinating world waiting there. It is like a beautiful Christmas present that is wrapped under the Christmas tree, and you are not allowed to unwrap it.

Even if we would succeed in flying into such a hole, we would not be able to tell anything about it, because one does not come back again. It reminds us of death, doesn’t it?

It is like alpha and omega, beginning and end: the big bang as the cradle of the universe and black holes as the end of space and time. Black holes will probably also be the last thing that remains of the whole universe. And insofar they are also a modern metaphor for death and ruin. I believe that many people understand this intuitively.

So black holes are also a symbol of our finite life?

In any case, the subject is not only physics. More than four billion people have seen our picture of the black hole. I am sure that many have an intuitive feeling that it also stands for fear, afterlife, destruction and death. But just as important is the realization that one can and may look at the picture nevertheless – that has then again therapeutic meaning, to talk about it and to think about it.

“It would disappoint me if I could prove God”

You are a very believing person. Are you also searching for God in your research up there??

My faith was certainly a motivation to explore the limits of our universe. But I don’t expect to prove or even find God with my science. On the contrary. It would even disappoint me if I could prove God.

Because then it would be a small god. It would be a very disappointing god if it could be fully grasped and proven by my mind. He would then also no longer be the one who stands at the beginning, who is outside and everywhere, but he would be a part of my universe and therefore yes small and tangible. This is not my image of God. But of course thinking about the universe also has an influence on my image of the creator and on my faith. That cannot be avoided at all.

You have already dreamed of space as a child, as you describe in your book. Does it appeal to you to fly into space with Jeff Bezos or others as a space tourist??

That would be too wasteful, too excessive for me. I think manned research missions are okay and important. Space travel for the pleasure of individual billionaires? I have a problem with this.

There is a lot to do in the future especially due to climate change on earth. Is the exploration of space, which after all also costs a lot of money, at all still contemporary?

Basically, I would think it would be completely wrong for us to now come to a completely inward-looking worldview because of our problems on Earth. In my eyes, we as humanity must continue to search, dream and think. It includes art, it includes joy, it includes sports, it includes philosophy. And that includes the basic research that unlocks our world for us. Exploration, art and high culture have of course always flourished only where societies could afford it. But if we stop exploring, it’s also the end of an open society.