RGB color tables, CMY color tables, mixing colors, seeing colors, feeling colors – colors are an incredibly important factor for emotionalization in all areas. Whether in one’s own four walls, in painting, photography, lighting design at a concert or in the theater, and of course also in product and general marketing … But in order to be able to use colors ideally, one must first understand how humans actually understand colors. 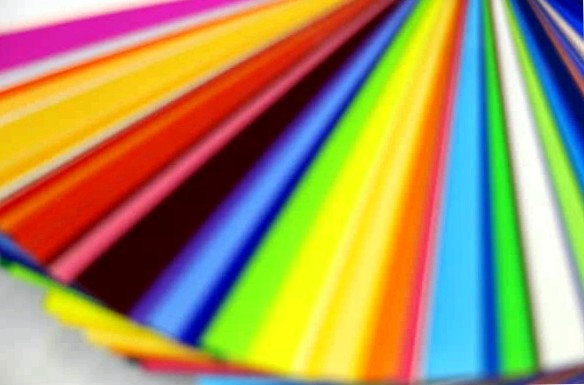 Feelings and emotions that are to be conveyed to theater sequences, shows, industrial presentations, a picture or even packaging are based on exact color patterns. But how is colored light actually perceived?

Man and the frequencies

Color is an interpretation of our brain’s perception of three sensory cells in the eye, the cones, which have their greatest sensitivity at 425 nm, 535 nm, and 565 nm. Their greatest number is found in the center of the retina, where we fix our image and see sharply. The fourth sensory cell in the eye is made up of rods, the number of which has its greatest distribution outside the center. The rods are much more sensitive to light than the cones. Due to their sensitivity in the entire light spectrum of approx. 400 to 750 nm wavelength they allow black and white vision even at very low light levels. The rods then have their greatest sensitivity at 507 nm – the greatest sensitivity in color vision is at 555 nm, so that in the dark green-blue light is detected as relatively bright and red appears darkest. Unfortunately, due to the distribution of the rods on the retina just described, visual acuity decreases in comparison to color vision.

Furthermore, the different wavelengths are refracted to different degrees by the lens of the eye. Thus, in monochromatic light, humans have a significantly higher visual acuity than in light of a wider waveband. A distinction is made between daytime, twilight and nocturnal sightings. The border between day vision (photopic vision) and twilight vision (mesopic vision) is at L = 10 cd/m2. The boundary between twilight vision and night vision (scotopic vision) is at L =0, 001 cd/m2. The night vision of the rods is also explained in the vernacular with: "At night all cats are gray". Medically, the three cone types cannot provide information of their specific wavelength sensitivity from violet to blue, green or yellow to red.

This means that a certain light intensity is the basic prerequisite for color vision in order not to sink into the gray. But much light also causes many visual dye molecules to decay. Thereby the concentration decreases until new molecules have built up again. By this time, the probability of a light photon hitting a molecule that can transmit a stimulus decreases. Therefore, at lower illuminance, the visual concentration is greater and thus the sensitivity is greater. The chemical process of the alcohol retinol (vitamin A1) for conversion to a nerve impulse is approx. 1 ms, while the eye moves from one extreme to the other to adapt to momentary light conditions (comparatively: Viewing the starry sky to solar radiation on glacier mountains) ca. 30 minutes are needed.

The overuse of the eye is also perceived as glare and catches ca. at 31. 500 lx on. The range of the "best" vision starts at ca. 630 lux. The three cone types of the respective basic color are together able to distinguish wavelength differences of 1 to 2 nm (the absolute color difference threshold). Our brain, on the other hand, is able to perceive about 55. 000 different color tones from each other. But also here our brain interprets the colors according to memory patterns. A white leaf is interpreted as white, even though it is sometimes illuminated with a "more yellowish" light from an incandescent lamp or with a "bluish" light from the sun at midday. This is why white balance is used with electronic media, because the machines cannot distinguish the fluctuating natural daylight (around noon it tends towards blue, high color temperature, in the afternoon towards red, low color temperature). We have to tell the machine that what we see now should later be white. This is also referred to as color retuning. This has the consequence that a photograph taken in a natural environment shows a supposed "color cast" as a result when reproduced in different ambient light. This does not necessarily mean an error in the image. Furthermore, a contrasting of the stimuli can be observed. Red and green-blue respectively. violet and yellow light have an opposite excitation effect. If one considers z. B. for ca. 30 seconds a colored surface and then looks at a white surface, the complementary color appears for short moments. 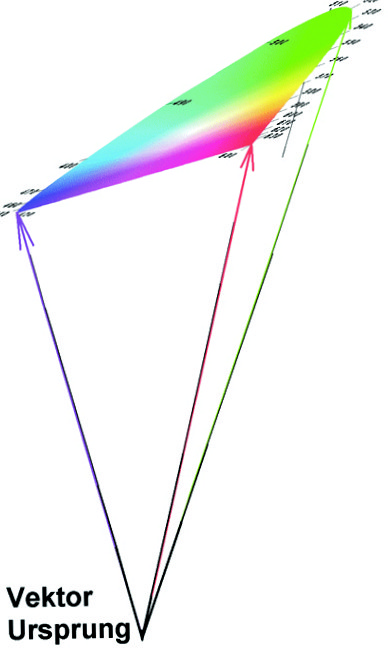 For the determination of the light impression the terms are particularly suitable: Brightness (engl. Brightness), hue (engl. Hue) and saturation (engl. saturation). The hue corresponds to the perception of a spectral light with designations such as violet, blue, green, yellow, orange or red; furthermore also purple, which is not a spectral color. If we draw the arc from the end of the spectrum to the beginning of the spectrum and bend this line in a horseshoe shape, we get a color triangle. On the way from the red to the violet part of the spectrum the non-spectral color purple appears. If one would imagine that from a black point (brightness = 0) three spatial vectors go out, which describe each of the three basic colors, one would receive a three-sided pyramid. The resulting color is determined by the three vectors with the color values R, G, B and the magnitude of the vectors. The vector calculation of color mixing can also be thought of as the calculation of the center of gravity of the three-sided pyramid. If you draw a section at the pyramid base of the three color vectors, you can imagine this area as a flat color triangle. According to CIE, the three primary colors (primary valences) are defined as red = 700.0 nm, green = 546.1 nm and blue = 435.8 nm, i.e. RGB. For the mathematical calculation of colors the values RGB can be used, or any other arbitrarily defined color like X, Y and Z. Now it is much easier to characterize a hue by describing it with the X and Y coordinates of the two-dimensional triangle, instead of the complex three-dimensional description with the three vectors. Thus follows: x= X / (X+Y+Z) and y = Y / (X+Y+Z)with 1 = x+y+z

Saturation indicates how close the color is to the spectral line. A saturation with zero corresponds to the colors of the gray ladder – the so-called achromatic colors. achromatic E in the colorimetric sense is at x = y = 0, 333. Not all colors of the visible spectrum are necessary for the sensory impression of white light. Orange light (612 nm) and blue light (490) mixed additively makes white "appear". These frequency pairs are called complementary colors. The pairs are easy to recognize if you think of a line through the white center point. The colors opposite to each other are the complementary colors. In addition, the temperature values of Plank’s radiation are often drawn in the color triangle.

Additive color mixing can be achieved by spatial superposition – like z. B. the superimposition of spotlight cones, or by very close spatial proximity, which our eye can no longer distinguish, such as z. B. the color dots on the picture tube – are created. However, an additive mixed color is also perceived by very fast temporally periodic color changes. In the case of a perceived color such as z. B. Yellow cannot be distinguished by an observer, whether this color consists of a pure spectral color (yellow 589 nm) or of the additive mixture of a red 671 nm and a green 535 nm, thus of a "conditionally" same color – as it is known from a RGB color table. If the yellow impression is the same despite different compositions, it is called equal color valence. Although both yellow tones leave the same color impression, they have different spectral compositions. If we now throw the spectrally same color on a green decoration, the decoration appears green. However, if we throw the "conditionally same color" onto the same green decorative object, it does not appear colorful (gray). Because here, when light is reflected on color pigments, subtractive mixing takes place again, which is very much related to the composition of the source light spectra. In additive mixing, the three primary colors red, green and blue are used to produce all other colors, including white, since all possible pairs of complementary colors can also be mixed from the primary colors. Red and green gives yellow. If the proportion of red is larger, the impression moves to orange. If the red component decreases, yellow-green is produced. If red and blue are combined, the result is purple, which is not part of the spectrum. The colors red, green and blue are called primary colors or colors of the first rank. Mixing two primary colors results in a secondary color (color of second rank).

In subtractive color mixing, colors from a "white" light source are absorbed by filters. For example, the use of a blue color filter produces visibly blue light, since it filters out the yellow component of the white light emitted. A yellow color filter absorbs the blue part of the white light, so that the complementary color yellow remains. Using a red color filter makes the visible light color red appear by absorbing the green component from the emitted white light. In practice, at this point at the latest, the entirety of a stage design must be considered for coherent, colored lighting, provided that the elementary objects of the stage design are colored. If these elements are illuminated in yellow, for example, and if these elements are not designed in white or yellow, but reflect the light with red color particles, the green component is also absorbed and the object appears orange in the end effect. That’s why a close cooperation of the lighting designer with the set designer(or also called set designer) is indispensable, because a good lighting composition is matched to the colors of the set and vice versa.

Video: How we see colors