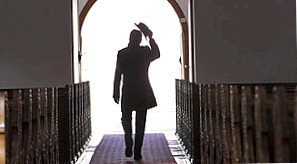 Many people leave churches because they don’t share their belief in God. However, this does not necessarily mean that they reject ethical principles. Copyright by lettas/Adobe Stock

Not really an earth-shattering matter: religion is a private matter and which God I believe in, or whether I believe in one at all, is nobody’s business. Certainly not my employer. He may not discriminate against me or even dismiss me simply because I do not share his views on matters of faith. After all, freedom of religion is a fundamental right. Article 4 of the Basic Law (GG) stipulates that freedom of faith, conscience and religious and ideological confession are inviolable.

However, church institutions tend to react sensitively to their employees if they do not belong to any religious community or belong to the wrong one. This is also the case with a Protestant institution for youth and disabled people from Baden-Wurttemberg, which runs various forms of residential groups for autistic people.

The institution dismissed a pedagogical employee because she had left the church. The pedagogue was primarily responsible for promoting coexistence in the residential groups. She was to help the members of the groups learn to cope with their daily lives. For the work, it was actually of no importance whether the employee was a member of the Protestant church. She did not have a religious educational mission. She is neither a deacon nor a theologian and her task was not to proclaim the church’s worldview. There was never any doubt that the pedagogical work was good.

However, the educator stands by the values of the church, such as openness, tolerance, autonomy, solidarity and respect for human dignity, even if she is not a member of the church. She always supported the mission statement of the facility and took part in church devotions and events on church holidays. She alone did not share the faith in God with the church.

But that was enough for the institution to terminate the contract. It considered membership in the church to be an elementary constituent part of the employment relationship. The plaintiff’s work was to be assigned to preaching/pastoral care and Protestant education and was closely connected to the ethos of the Protestant church.

The colleagues from our office in Stuttgart represented the educator in her dismissal protection proceedings before the labor court and were proven right. The court found that the institution was not entitled to terminate the employment relationship, neither for personal nor behavioral reasons.

In the plaintiff’s daily work, it does not appear necessary for her to manifest the defendant’s self-image to the outside world. The plaintiff does not provide pastoral assistance and also no life help, the decisive factor is the everyday life coping of the clients.

This is what we say about it:

Employers are not concerned with my private lifestyle, beliefs or political views, as long as I do not violate laws and do not behave in public in a way that harms the employer. Whether I believe in God or not is my own private affair. In any case, if the proclamation of my faith is not part of my job duties. A pastor who does not believe in God and rejects the ethos of his church employer will hardly be able to remain a pastor.

Ethos refers to the moral disposition of a person or a community. It is therefore fundamentally independent of belief in God. The educator in the case described has clearly declared her commitment to the ethical principles of the institution: to its values such as openness, tolerance, autonomy, solidarity and respect for human dignity. Conversely, membership in the church does not yet signal which ethical principles the member follows. There are also rather evangelically thinking church members with a rather outdated missionary claim that casts doubt on ethical principles such as human dignity and tolerance.

The greater scandal, however, lies in the fact that, according to our understanding of ecclesiastical self-determination, churches create their own law, as it were.

The General Equal Treatment Act (AGG) applies to employment relationships. One of the aims of the case is to eliminate discrimination on the grounds of religion. However, § 9 AGG relativizes this goal. "if a certain religion or ideology, taking into account the self-image of the respective religious community or association with regard to its right of self-determination or according to the nature of the activity, constitutes a justified occupational requirement"."

Churches want to determine for themselves what is right

Churches in Germany basically determine their own labor law, which in some cases differs considerably from statutory labor law. This special position had already been granted to the churches by the Weimar Reich Constitution (WRV). Article 137 (3) WRV stipulates: "Each religious society shall order and administer its affairs independently within the limits of the law applicable to all of them. It confers its offices without the participation of the state or the civic community." Article 140 GG determines u.a., That this regulation also becomes the subject of the Basic Law.

We had reported several times on cases in which church institutions had dismissed employees because of a violation of the church "ethos". For years, for example, the dismissal protection proceedings of a chief physician, who had been dismissed by a Catholic hospital due to his divorce and remarriage, were ongoing.

In a nutshell: the never-ending story of the head physician

The head physician had been proven right in all three instances of the labor court system. Meanwhile, the Federal Constitutional Court (BVerfG) had upheld a constitutional complaint by the hospital. Only the churches themselves could determine what the respective faith conviction commanded. Within the framework of its right of self-determination, it is the sole responsibility of the respective church to determine for itself, on the basis of its religious convictions, what loyalty expectations it places on its employees. Only at a second stage of examination would the courts have to weigh the right of self-determination of the church against the fundamental rights of the employees. The BVerfG had referred the matter back to the BAG with regard to the second stage of the examination.

The BAG had then referred the matter to the European Court of Justice (ECJ), since European law was involved. The ECJ, in its decision of September 2018, clarifies that a difference of treatment based on the faith of an employee can only be justified if, in view of the nature of the professional activities concerned or the circumstances in which they are carried out, the religion or belief is an essential, legitimate and justified occupational requirement in view of that ethos. On the basis of this decision, the BAG then finally ruled in favor of the head physician nine years after the dismissal in a ruling in February 2019.

European Court of Justice: whether a provision of the church complies with European law must be decided by the courts

In its September 2018 decision, the ECJ indicated that national law alone cannot be used to determine whether a church or other organization’s regulation of the extent to which its employees behave loyally and honestly is lawful. It must also respect the provisions of Art. 4 para. 2 of the European Union Directive 2000/78 and the criteria mentioned therein, compliance with which must not be deprived of effective judicial review.

The ecclesiastical right of self-determination, which in principle also applies under European law, cannot therefore go so far that the churches do not have to comply with applicable -European law.

No legal vacuum for the churches!

So an old braid needs to be cut off. It cannot be that churches themselves can determine what rights their employees have. Admittedly, the law on protection against dismissal also applies in church institutions. However, many important labor law standards do not apply. This includes the Works Constitution Act. Instead of a works council, there are employee representatives in these facilities with very limited rights. As a rule, working conditions are not determined by collective bargaining agreements, but in the so-called "third way" by committees with equal representation of employers and employees. Strikes with the aim of enforcing demands of the workers* in these negotiations are not allowed, according to the churches, because they are supposed to be incompatible with "service to others". What arrogance of the churches!

What they call "service to others" in their pastoral terminology is nothing more than advocacy for solidarity and human rights, as other organizations do. Hospitals of other providers, for example, the Red Cross and, last but not least, the trade unions.

Historically, ecclesiastical self-determination is based on the separation of church and state. And this separation is also right and good. In matters of faith, the state should stay out of it. But not on the question of how churches and church institutions treat their employees. Churches can also proclaim the gospel free from state influence if German labor law also applies to them without exception.