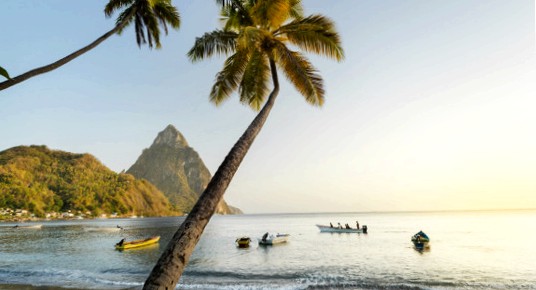 Hundreds of dream islands crowd the Caribbean Sea. The choice is difficult. So here’s our suggestion: stress-free island hopping to five neighboring mini-paradises with an anti-boredom guarantee. Hiking, surfing, sailing or relaxing on a secluded beach – what would you like to do??

Like a string of pearls, the Lesser Antilles lie in the Caribbean Sea. Why visit only one, when the next tropical beauty is already waiting next door? From Guadeloupe in the north, with nice stops along the way, you will reach St. Vincent and the Grenadines in the south. 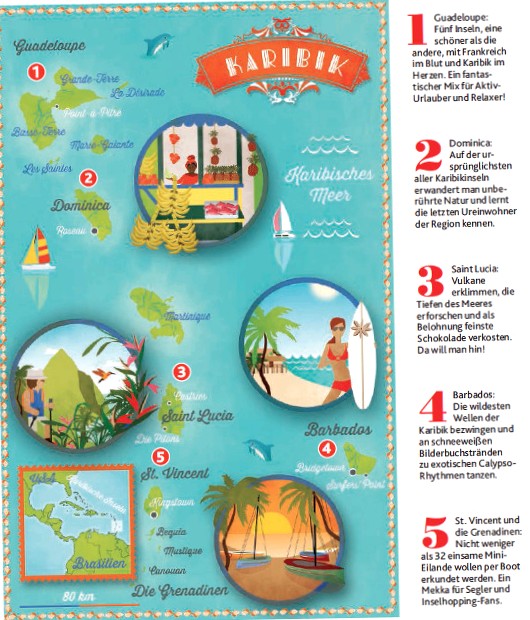 Viewed from the air, it looks like a green butterfly drifting in the sea with its wings spread. "Butterfly Island" that’s why the French overseas department is called. Which is not quite correct, because Guadeloupe is not a single island, but a whole archipelago: Basse-Terre in the west and Grande-Terre in the east form the wings of the "butterfly", separated by the 50 meter narrow Rivière Salee and surrounded by the islands of La Desirade, Marie-Galante and the Îles des Saintes !anked. Five at one go – where to start?? The town of Point-à-Pitre on Grande-Terre is an ideal starting point for a "Tour de France Caraibe" thanks to its central location at the bridge crossing to Basse-Terre with airport and all kinds of ferry connections. Let’s go! Only seven kilometers south is the coastal town of Le Gosier, which translates as "pelican". "Because of the shape, explains tour guide Danielo. "The place is long and narrow. Since it does not have a central square, there is exceptionally no market here." But it is adorned by an offshore islet: Îlet du Gosier is located 600 meters from the shore and offers peace and quiet as well as a casual beach bar. On fishing boats you can be driven across for a small amount of money. Later, as you zoom along the coastal road on the flat limestone island (the Karibe maintains a leisurely pace of approx. 15 kilometers per hour), discover colorful markets and large sugar cane plantations that also cover large parts of the interior.

It goes to Sainte-Anne, Saint-Francois and Port-Louis. A picnic stop at the Plage du Souffleur, the "beach of the whisperer", is worthwhile, where you can relax on shady benches under palm trees. Fancy a wild spectacle of nature? Then it’s off to Pointe des Châteaux, the easternmost tip of Grande-Terre: here the Caribbean Sea and the Atlantic Ocean meet in a thunderous cliff clash. A new world opens up when you cross the Rivière Salee to Basse-Terre and take the route across the Parc National de la Guadeloupe: lush green rainforest nestles against the slopes of the volcano La Soufrière. Halay there, you’ll pass the Cascade aux Ecrevisses waterfall. Perfect for giving yourself a refreshing bath. On the west side of the island, steep switchbacks wind down the volcano to the coast, where the Îlets Pigeon in Jacques Cousteau’s underwater reserve attract divers from all over the world. Don’t miss the Îles des Saintes, an archipelago of nine mini-islands, of which only the main islands Terre-de-Bas and Terre-de-Haut are inhabited. If you have to ride one of the many rental Vespas up the hills to the historic Fort Napoleon on the latter, you’ll be richly rewarded at the top – with a gasp-worthy view! 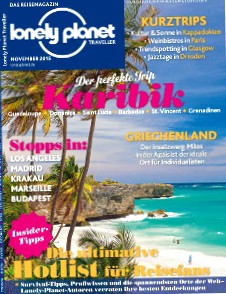 The full article with info on other exciting islands of the Caribbean can be found in the November issue of Lonely Planet Traveller.

How long to stay?

If you want to follow the route as described here, you should plan for at least 10 days. So you have two days per island at your disposal. There is no need to calculate extra travel days, as the transfers between the islands are very short. However, the more time you have, the deeper you can dive into this paradisiacal archipelago.

Overnight stays in Mitellklasse hotels or small pensions cost between 50 and 80 € per night. Larger resorts with beach location are priced at a good €120 to €140 per night. Luxury hostels can easily be two to three times as expensive. If you want to dine in fancy restaurants, you have to expect prices of 40 to 60 € per person. Much cheaper and more authentic are small restaurants serving local cuisine. The local currency on Guadeloupe is the euro. On Dominica, St. Lucia as well as St. Vincent and the Grenadines you pay with the East Caribbean Dollar XCD (1 € = approx. 3 XCD). Barbados has its own Barbados Dollar BBD (1€ = approx. 2.25 BBD). The U.S. dollar is also accepted on many islands.

Temperatures are 27-32 °C all year round. The dry season goes from December to May, the rainy season officially starts in June and ends in November, although it is still quite nice in June and you can get great low-season bargains. September and October are hurricane season!

Digital vacation greetings from our readers and the best snapshots from the road!