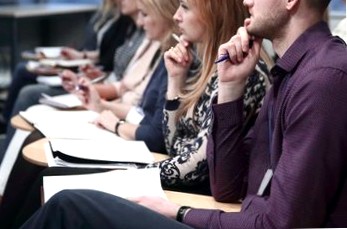 Taking minutes for a meeting does not have to be difficult: With the right preparation, clear structuring and a targeted protocol technique, the results are already professionally recorded directly at the end of the meeting or the voting round.

The most frequently used form of protocol, both in the business environment and in clubs and associations, is the bullet-point results protocol. It is not an "official" protocol form, but emerged from practice.

Basically, this is a mixture of a short protocol and a results protocol:

In addition, development departments in companies also use purely tabular forms of reports that are kept with a spreadsheet program such as Microsoft Excel.

Other forms of results recording and logging

Today, the securing of results in the broader sense is also served by, for example

They differ from minutes (in the narrower sense) mostly in that they are the results of individual work (test report) or do not record what has been agreed with the discussion partner, but rather what is subjective and has no probative value.

For these forms you can often use the same structure and layout, i.e. also the same template in your word processing or spreadsheet program, as for the classic minutes.

Particularly fast and effective: The meeting minutes as online minutes

When preparing traditional, long-formulated minutes, it is not only the preparation that takes a long time – a lot of time also elapses between the meeting and the receipt of the minutes.

In the past, it was considered "normal" to send minutes two weeks after a meeting. And if a participant then remembers that, in his or her opinion, something different was decided than what is written in the minutes, this often leads to discussions, new votes as well as, in any case, to a further delay – and a lot of time spent always also means: additional costs.

Take minutes directly during the meeting

In order to save not only time and costs, but also nerves and to ensure the rapid implementation of decisions, the technique of so-called online logging is mostly used in companies today.

"Online" does not mean that there must be an actual online connection to the Internet or to a network. It means "directly during the ongoing meeting".

Particularly in technical areas such as development, the minutes are created directly on a notebook and projected on a beamer for all participants to see.

In addition to speed, this has another major advantage: The wording in the minutes can be checked and approved directly by all participants.

In an online protocol, each item on the agenda (TOP) follows the following pattern:

Then it goes on with the next TOP. When a meeting is held in this form on a notebook, the minutes are completely finished immediately after the last item has been dealt with and can be sent off.

In the case of particularly critical topics, one often goes even one step further, for example in the case of supplier meetings. If quality problems or other deficiencies are discussed and the supplier commits to improvement measures, you want to ensure clear commitment and quick implementation.

This is how you proceed:

The big advantage with this approach: They prevent one of the participants from later claiming that a decision was not made as written in the minutes – after all, it is his signature that is underneath, almost like a contract.

The classic protocol framework: Rules and specifications for head to tail

Although there are no generally valid design rules or DIN standards for minutes, you can transfer many of the rules formulated in DIN 5008 (these are the writing and design rules for text processing) analogously.

However, there are more precise requirements for the so-called protocol frame. This means the "header" (i.e. the beginning on the first page) and the conclusion of the minutes. Very specific information must be placed here.

At the end of the minutes used to be mandatory:

Since most minutes are now produced and distributed in digital form (for example, as a Word or PDF file), signatures are usually not required.

And if the minutes do require a signature?

Sometimes, however, it is mandatory for internal or legal reasons that the protocol bears a signature.

To then print, sign, copy and mail efficiently prepared minutes would certainly be a step backwards into outdated procedures. Nevertheless, some minutes must actually be signed in order to be "valid. Also sending a signature file in TIF or JPG format makes no sense of course.

The solution is simple:

If someone actually doubts that the minutes were signed by the meeting leader in this way, you can always submit a paper copy later – or the "doubter" can inspect the signed copy at your office if necessary. If the minutes have been created as "online minutes", however, there will be no such queries.

How to organize the content clearly? The basic structure within the agenda items

If individual TOPs are very extensive, i.e., consist of more than eight to ten paragraphs of text, they should be organized (and all uniformly) in terms of content. This simplifies the formulation of the minutes and ensures that nothing is forgotten. In addition, information can be found much faster when reading later.

Alternatives for structuring the TOPs

The order of the last two points of this basic structure can be exchanged; for certain protocol or report types this is even always the case, for example in the test report.

The following structure is recommended here:

What information always belongs in the protocol

Information that should not be missing in any case is the following:

As a rule, anything that does not specifically serve to secure results does not belong in a contemporary protocol, such as:

Simplify the preparation of minutes from now on: Download the free download: "Taking minutes made easy" now and get valuable samples, templates and wording examples for the different types of minutes as well as the header and conclusion!