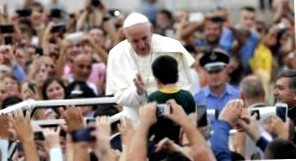 Pope Francis condemned intolerance and violence in the name of religion during his visit to Albania. Oppression of those of other faiths is a "particularly insidious enemy," he said, addressing Christians and Muslims.

Belief in a single Creator leads to the conviction that all human beings are brothers and sisters. Basically, they are all pilgrims on this earth and depend on each other in their longing for truth and eternity. Religious freedom, moreover, is a bulwark against totalitarianism and a crucial contribution to fraternity, according to Francis. Religious freedom can create a common space of cooperation, Francis said. He said interfaith dialogue must help faith communities work together for a more just world. Religions should also cooperate with those who do not hold religious beliefs.

Francis spoke at the Catholic University of Tirana to representatives of Catholic and Orthodox churches, Sunni Islam, the Bektashi group, which is strong in Albania and influenced by Sufism, and a representative of the small Protestant community in the country. Earlier in the day, Francis had already spoken at a Mass attended by some 250.000 faithful in the Church's Mother Teresa Square in Albania thanked for their fidelity to the faith in times of persecution.

Francis repeatedly praised the peaceful coexistence of religions in Muslim-majority Albania during his visit. After the cruel oppression under the communist dictatorship, the country had created a real religious freedom in which ancient traditions could revive. The Pope encouraged the Albanians to continue and develop this path. He also appealed to the youth in the country not to give in to the temptations of individualism and materialism.

Emotional meeting with victims of dictatorship

At a subsequent meeting with bishops, pastors and religious in the Tirana Cathedral, Francis listened with deep emotion to the accounts of persecuted clergy from the time of the dictatorship. Touched, he embraced the priest and the nun. At the meeting, 84-year-old priest Ernest Simoni first told him about his imprisonment and torture during the atheist regime. "They wanted me to speak against the Church, but I did not accept that," Simoni said. According to Simoni's report, the pope hugged him for a long time, then took off his glasses and wiped his eyes.

The Pope then listened to the story of 85-year-old religious sister Marije Kaleta. The latter told, among other things, how she baptized the child of a communist after the mother implored her to do so. "Even today, when I remember, it seems incredible to me how we were able to endure these many terrible sufferings, but I know that the Lord gave us the strength, the patience and the hope," the nun said. The Pope also embraced them warmly.

In a free speech, Francis gave Albanian clergy and religious courage for the future and thanked the country's church for its witness of faith during the dictatorship that lasted until 1990. "Woe to one who seeks comfort apart from the Lord," he said. No one finds happiness by turning away from God.

Albania's communist rulers had declared the Balkan country the "first atheist state in the world" in the 1960s and brutally suppressed any practice of religion. About 200 clergymen were subsequently murdered. The beatification process is currently underway for 40 of them.

Pope: kindness is the true strength

During his visit to the Bethany Center in Tirana, Francis said kindness should never be confused with weakness. Those who respond graciously to insults possess true strength, Francis said. Church institution cares for orphans. The pope thanked the staff for their commitment. They lived by the words of Jesus: "Whoever receives one such child for my sake receives me."

"Goodness is the reward of itself and brings us closer to God, the highest good," Francis emphasized. It rewards infinitely more than the money that disappoints people. Faith and love move the mountains of indifference, the pope said. According to him, man was created to receive and give God's love, "and not to judge everything on the basis of money or power.".

Every religious community expresses itself with love, not with violence. Children's center praised by Francis as an example of peaceful coexistence of different ethnicities and religions. Differences did not hinder harmony there, but led to a deeper acquaintance.

At the end of the reception, a statue of St. Anthony, which the Pope had brought as a gift, was unveiled to great applause. The saint is the patron saint of the Bethany Children's Center.

The Pope's one-day visit to Albania was his fourth trip abroad and the first to a European country outside Italy.