Smoking has been one of the most common methods of preserving fish and meat for centuries. In this age of freezers and canned foods, this technique has been almost completely forgotten in most households. Smoked fish has become an expensive delicacy today, yet it is very easy to make, even for novices. And to try it out, it doesn’t have to be an expensive professional smoker, an inexpensive tabletop unit will do just as well. 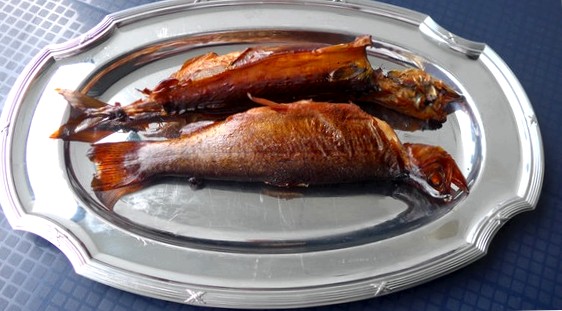 Tasty fish from the tabletop smoker

All fish with a high fat content such as trout, char, salmon, eel, herring or mackerel are well suited for smoking – they remain wonderfully juicy and aromatic during hot smoking. Plaice and flounder are also very tasty smoked. Fish with lean meat such as cod, perch, pike-perch or pike, on the other hand, are better off in the pan, they quickly become very dry in the smoker.

Table smoker for home use

Table smoke ovens can be used almost anywhere – even on the balcony. The stainless steel devices cost about 30 to 50 euros, have the size of a normal kitchen roaster and are fired on a supplied rack with spirit burners. To make it smoke properly, fill the oven with a few tablespoons of beech flour. A disadvantage is that the smoked meat retains a relatively high residual moisture in table ovens. This makes the meat juicy and tasty, but not quite as long-lasting as large ovens.

In addition, the temperature cannot be regulated well and the fish cannot be smoked in a hanging position. Especially thin-skinned fish like herring or mackerel burst because of the high heat – but this is more an optical problem, the meat still tastes delicious. If the fish is allowed to dry sufficiently beforehand, even the small devices deliver good results. The fish are cooked when the burners have gone out by themselves.

Smoker cabinet is worthwhile for professionals

If you want to process larger quantities of fish on a regular basis, and especially if you want to smoke larger fish or eels in a hanging position, you should purchase a smoker cabinet – preferably made of stainless steel. For the narrow budget are also suitable extendable smoking barrels. When buying the "amateur fishmonger" must choose decide whether he wants a model with external or internal firing, whether it should be traditionally heated with a wood fire or equipped with finely adjustable gas or electric heaters. Gas firing clearly offers the greatest convenience: Even large ovens can be preheated quickly – without any ash, soot or smoke, and the heat is very easy to control because the flame can be regulated. The smoker should also be equipped with a thermometer.

Pickling in brine and drying

Before the spicy smoke rises from the oven, the fish must be soaked in brine and then dried – so that they do not burst later when smoked and take on a golden brown color. Before placing the fish in the smoker, gut it thoroughly – the kidneys and gills must also be carefully removed. The salt concentration determines how long the fish must rest in the smoking brine. The salt extracts water from the meat and thus makes it durable. According to taste and imagination, the brine can be refined with spices such as bay leaf, allspice, juniper berries, pepper or thyme.

The flavor develops best when the spice brine is boiled briefly. However, before placing the fish in the oven, the broth must be completely cooled down. Then put the fish in the oven for between six and 24 hours, depending on the amount of salt (see table); they must be completely covered with the broth. Then rinse under cold water and pat dry. Hang the fish on smoking hooks or cable ties – for example, on a clothes dryer – to dry for a few hours until the skin feels like leather.

Once everything is prepared, bring the oven to temperature. This is done with a classic wood fire directly in the smokehouse (internal firing), with a fire bowl under the oven (external firing) or with an electric or gas heater. If you prefer the classic fire directly in the smokehouse, do not use artificial fire accelerators, as these can release harmful substances. Use only pure beech wood, fruit woods are also suitable. Never use conifers with a high resin content, they can spoil the smoked product when fired internally. Once the oven has reached a temperature of 90 to 100 degrees, the fish can be hung in place.

Important: To avoid a grease fire, hang a so-called drip tray under the fish. During the cooking phase, the ventilation slots can be opened to allow residual moisture to escape. Now close the hatch or flap and briefly expose the fish to the very high initial temperature to kill bacteria and germs. For the rest of the cooking phase, a temperature of about 75 to 85 degrees is sufficient. Depending on the size and type of fish, the cooking time may vary (normal portion trout need about 30 minutes). The smoked fish is cooked when the dorsal fin can be pulled out easily.

Refinement in the smoking phase

Now the actual smoking phase and taste refinement begins: With an internal firing, extinguish the wood embers with smoking flour, no more flames must beat and it must smoke properly. Close the oven and smoke the fish until they have the desired color. If necessary, refill the smoker meal several times to ensure the appropriate smoke development. If the oven is externally fired, place a bowl of smoked flour on the bottom of the oven. Now light this with a gas burner, for example, with the hatch open until the beech flour begins to smoke. Then close the hatch and turn off the heat supply.

During the smoking phase, the temperature can be much lower than during the cooking phase. Ideal temperature is about 40 to 60 degrees. Once the desired color is achieved, hang the fish to cool or place them on a grill. The delicious smoke aroma develops completely only after cooling, then the meat is also nice and firm. Honey-mustard sauce and horseradish cream are the classic dips for later consumption. The fish will keep for at least seven days in the refrigerator, ideally vacuum-sealed in foil. In the case of appliances with external firing, it is also common to carry out the cooking and smoking phases simultaneously.

The classic smoked salmon is not hot-smoked, but cold-smoked. To do this, large trout, char or salmon fillets with skin are previously pickled. Prepare the pickling mixture with equal parts of salt and sugar and sprinkle it thinly but densely on both sides of the fillets. Leave to rest in a covered dish in the refrigerator and regularly remove the liquid that forms. Depending on the thickness of the fillets, this process can take up to one and a half days. Finally, wash the fillets and pre-dry them in the same way as for hot smoking.

The pickled fish is then finished without heat – at a maximum temperature of 25 degrees – for about eight hours with beech smoke. Then let the fish rest for about twelve hours in an airy place, then smoke again for eight hours. Before serving, let it rest for another 24 hours. To ensure that it smokes properly for a long time in the oven, the smoking flour is lit in a smoking bowl at specific points, the embers then slowly eat their way through the chips. It is even easier with an economy fire insert, also called a long-smoke insert, which is available from specialist retailers. Cold smoking should only be done in autumn and winter because of the temperatures, because at over 25 degrees in the smokehouse, fish protein begins to set.