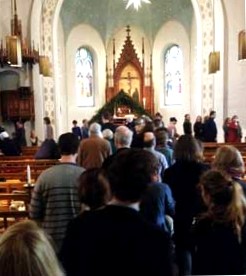 For Advent, a real traveling pastor invited me to discover Finland with him. German pastor Hans-Christian Beutel travels all over Finland for the Evangelical Lutheran Church, taking care of German parishioners between the Baltic Sea coast and the Arctic Circle. "Joulukuu" is the name of the Christmas month December in Finland. 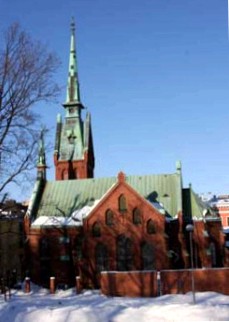 On 1. I experienced something very interesting during Advent. I was a guest in the German Church in Helsinki. The pretty little church stands directly at the harbor. There where the big ferries from Stockholm (Sweden) and Tallin (Estonia) dock. The seagulls showed me a hatch in the tower, through which I could flutter into the church.

When I looked closer, I noticed that they were all trying to squeeze through some kind of gateway. That was in the middle of the aisle. Two young people held it. And it was decorated all over with fir greenery. 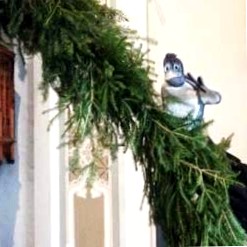 Then I grabbed my magpie heart, flew down from my seat and landed right on the gate. Yikes, that was some excitement. The children told me why they all wanted to pass through the "Hosanna Gate":
You remember a story from the Bible where Jesus rides a donkey through the gate of Jerusalem and all the people are cheering and shouting "Hosanna" to him. That means as much as "Yay", "Ole" or "Hooray".

I liked that. So they didn’t just listen to the story, they actually acted out what is written in the Bible. The children also told me what the Finnish song is called in German: "Hosanna, son of David! Hosanna on high! Praised be David’s son, who comes in the name of the Lord." 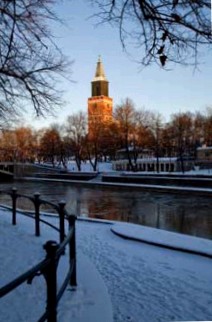 My second Advent weekend in Finland was quite exciting: There I was in Turku. There stands the most important church of all Finland: Turku Cathedral. This beautiful medieval cathedral is located directly on the Aurajoki River and is considered the national shrine of Finland. It was not difficult to get in: all the doors were open, because many people were coming to this big church. Always on the Saturday before the 2. Advent are sung here namely the most beautiful German songs to Advent and Christmas. There is something going on!

The choir of the German community from Helsinki comes in a big bus and a small orchestra comes too. But this is not just a concert where a choir sings and people listen silently. No, all the people in the church sang along. And that sounds tremendous!

An Advent song by Martin Luther 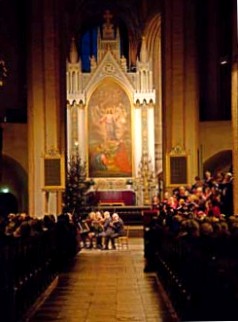 I had a great place to listen. (I rather did not want to croak along!) From the songboard behind the choir I could see and hear everything really well. The people had shining eyes – they love these German songs, although they also have beautiful Finnish Christmas songs. An old cathedral lady told me why: many people here used to learn German in school and they like this language very much too. And then a bishop used to work here in this church, who had studied in Germany: with Martin Luther in Wittenberg. And then this Bishop Agricola brought the Reformation from Germany here to Finland. From Turku Cathedral, the Reformation spread throughout the country – that’s why this cathedral is the most important church in Finland. And the German carols also remind us of this, which is why we sing a Christmas carol that Martin Luther wrote: "Vom Himmel hoch, da komm ich her" ("From Heaven on High, Here I Come")." And on the last verse, all the people stand up – just because it’s more festive that way:

"Praise, honor be to God in the highest throne,
who gives us his one and only Son.
The angels rejoice
and sings us such a year."

Kira: Hello Petra, where did I end up here??
Petra: You are here right now in the old rectory of Jyvaskyla, very close to the town church.
Kira: I was in the city church earlier – that was great! There were so many people at the Advent service. What a lot of people?
Petra: These are very different people: For example, there are people who were born in Germany and then moved to Finland. Then there are Finnish women or Finnish men who are married to a German partner. And there are also a lot of Finnish people who have learned German – at school or at university. For example, here are some old people who are in the German course with me at the Senior University. Then of course there are the children of the German-Finnish couples. Very different people!
Kira: And how often do you come together??

Petra: From the community about three times a year. Now, of course, most of them come to the Advent service. But many also come to the harvest festival – we celebrate it in an old farmhouse. And we also celebrate Easter together.
Kira: And where are you from? Why do you live in Finland?
Petra: I was born in Bielefeld, Germany. I grew up in Marburg. I also studied there and then moved to Finland because my husband is Finnish. We have three children – and when the third child was born it was clear that we would stay here.
Kira: And then you learned Finnish?
Petra: I learned Finnish too, more or less on the side and not really in school. That’s why I can’t really write Finnish, but I can speak it quite well.
Kira: Do you have a favorite word in Finnish??
Petra: Hm … a favorite word? Yes, one word I associate with a lot is "neuvola" – I got to know it here and I got a lot of help when my children were small.
Kira: And what does it mean?
Petra: "Neuvola" can’t be translated into Finnish. In the dictionary it says "counseling center" but that does not reflect well what "neuvola" is. This is a place where you go when you get pregnant and then there are women who help you and accompany you and examine you. And doing everything so that the children are born healthy. They accompany you through pregnancy and afterwards until the child starts school.

Kira: If you celebrate Christmas here in Finland – is there something typical for Christmas in Finland??
Petra: Yes, there are, absolutely. And we also have it at home. I would say that in Finland there are much more uniform customs that all people here keep than there are in Germany. Especially for Christmas Eve: you definitely go to the sauna to prepare for the feast. And there is definitely rice porridge with an almond in it and the one who finds the almond gets to make a wish. And it is also very important that people go to the cemetery in the afternoon and light a candle on the graves of their relatives. In the evening, after the service, there is the big Christmas dinner with very traditional dishes: Christmas ham, turnip casserole, stockfish (not everyone likes it) or smoked salmon, salad, gingerbread and cookies.
Kira: Why don’t you teach me what "Merry Christmas" means?!" in Finnish means.
Petra: "Merry Christmas" is called "Hyva Joulua".
Kira: Hyva Joula!

I am very excited about what I will experience in Finland and I will tell you more about it soon!