Such and similar search queries are many on Google. However, from my point of view, the answers there are anything but helpful. Above all esoteric offers and signposts are found, which partly lack any basis. I would like to give at this point an overview of what the Bible says about angels and what of it is relevant for you. 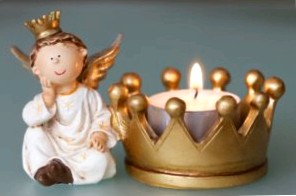 While angels are normally seen as cute, somewhat chubby figures that can fill the coffers, especially during the Christmas season, there are also other ideas. Sometimes I think everyone who has any idea or opinion at all about this "blows it out on the internet", whether there is any basis for it or not.

In esotericism, angels are above all beings of light and love. They are often seen as guardian angels and attempts are made to contact them. From this contact, also called channeling, people hope for supernatural guidance and luck in their lives.

What is attempted here – and with other esoteric practices – is to penetrate into the invisible world. In many religions (in the monotheistic religions, i.e. Judaism, Islam and Christianity, but also in other religions and worldviews) it is believed that there is an invisible world, a non-visible realm. This realm influences our visible, earthly life. In the Bible, the invisible realm is the one where God lives with his angels and the devil lives with the fallen angels, the demons.

Since this invisible world is as real as our visible one, there are more often people who see angels, but also demonic beings.

Angels in the Bible

Angels appear constantly in the Bible. In God’s history with mankind, they obviously play a significant role. The German Bible Society names the following tasks of angels:

Angels appear again and again. Quite normal people can see angels here. What I find exciting-and what clearly contradicts the cherubic-angel thinking of the Christmas season-is that the first thing people who had angelic encounters had to hear was: do not be afraid, do not be afraid (z.B. Judges 6:23 ). Apparently – and so the Bible says – angels were and are strong, powerful and pugnacious beings who come in the authority of God and can frighten people, even if that is not always their mission.

I would like to present a few angelic encounters in the Bible as examples:

An angel fights for Israel

Again and again we read in the Bible that God sends his angels to protect his people.

That night the angel of the Lord went out to the Assyrian camp and killed 185.000 man. When they woke up the next morning, everything was full of corpses.

One of the most exciting passages about angels is found in the Book of Daniel. Daniel prays for quite some time, but no answer comes at first. Finally, the archangel Gabriel appears to him to give him an answer to his question. Then in Daniel 10:12 to 14 it says:

Then he said: "Do not be afraid, Daniel! From the day that it became important to you to understand the crucial thing and you humbled yourself before your God, your words were heard. Therefore I also came to you. But the angelic prince of Persia resisted me for 21 days, until finally the archangel Michael came to my aid and took up the fight with the angelic prince of Persia for me. So I could go and now I am here. I am to explain to you what will happen to your people in the last days. This vision will be fulfilled only in the far future."

Angels often appear in the Bible as messengers. Whether it is Abraham who is encountered by three angels promising him the birth of his son (cf. 1. (Genesis 18) or whether the angel Gabriel in the Christmas story explains to Joseph what will happen to his betrothed Mary and how he is to protect the newborn Jesus (cf. Matthew chapters 1 and 2).

In Acts 8, verse 26, an angel of the Lord speaks to Philip and gives him an assignment. Later (Acts 10:3ff.) the Roman centurion Cornelius is visited by an angel who gives him the order to invite Simon Peter to his house. 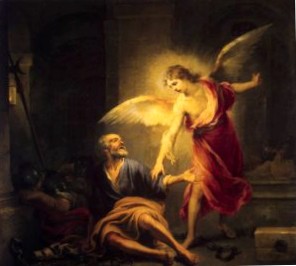 An angel frees Peter from prison

A particularly impressive passage is found in Acts 12. Peter is in prison and an angel appears to free him:

Suddenly a radiant light appeared in the cell and an angel of the Lord stood before Peter. The angel poked him in the side to wake him up and said, "Quickly! Stand up!" And the chains fell off his wrists. Then the angel said to him: "Get dressed and lace up your sandals." This is what Peter did. "And now take your cloak and follow me," the angel commanded. Peter left the cell and followed the angel, believing he had a vision. He was not aware that the whole thing was actually happening.

In the media nowadays there is rather little reported about people seeing or meeting angels. I would like to report three incidents in which I had to deal with angels, resp. of which I have heard.

To want to see angels seems to be a wish for many people. But from my point of view this wish goes in the wrong direction. Angels are messengers of God, sent to serve us. While it is certainly a faith strengthening and also quite an impressive experience to meet an angel, it is like having a gift. The important thing is the giver, not the gift. Referring to God, important is He. The longing should be to meet Him, not to receive gifts from Him or to see His servants.

Yet God is a good God, much nicer than I probably would be&

If you would like to see angels, ask God, who gives gladly without reproach (cf. James 1:5 ). In the Bible, there is a very exciting story about God opening a person’s eyes to the invisible world. The prophet Elisha is with his servant in a city, which is then surrounded to capture him. When the servant notices this full of fear, Elisha prays that God will open his eyes. He can thereupon see angels fighting for them with their fiery horses and chariots.

So by night the king of Aram sent a great army with many chariots and horses to surround the city. When the prophet’s servant got up the next morning and stepped out of the house, the city was surrounded by troops, horses and chariots. "My Lord, what shall we do?", he called out to Elisa. "Do not be afraid!", said Elisa. "Because there are more on our side than on theirs." And he prayed, "Lord, open his eyes and let him see." Then the Lord opened the servant’s eyes, and when he looked up, he saw that the hill country around Elisha was full of fiery horses and chariots.
2. Kings 6,14-17

I hope this article has helped you. Feel free to write in the comments how you feel about it.