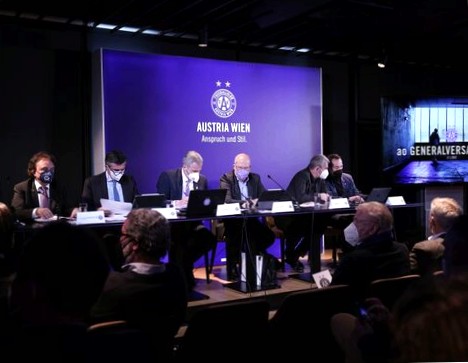 Wiener Austria has a new group of investors. The ordinary members of the club unanimously approved the sale of 40 percent of the shares of the AG at a general meeting on Monday evening. The Bundesliga club has thus taken a step out of its economic malaise.

The bodies of the traditional club had previously agreed on the contract modalities. The deal is worth ten million euros, and is intended to ensure Austria’s survival for the time being.

The good news was also brought by a man who is to have a lasting influence on the sporting fortunes of the club. Jurgen Werner is part of the "Viola Investment GmbH-Freunde der Austria". "We have now awakened Austria from its coma, but it is still an intensive care patient", Werner said at a press conference. The former vice president of LASK is to help steer the club’s fortunes in the future as sports director.

For the time being, however, the former player-advisor is banned by the Bundesliga; last June, Werner served an 18-month functional ban for violations of league regulations. The 60-year-old has contested these. Otherwise, there are no unknown players at work in Viola GmbH. The presidium around president Frank Hensel and vice Raimund Harreither is represented, plus sympathizers like Real star David Alaba, who has purple roots. He let himself be represented by his father George and reported via video to the supporters.

Hensel reported a "very intensive but constructive general meeting". The motion was passed without any dissenting votes, there were only a few abstentions. According to Hensel, the club can now look ahead. "This is the beginning of a new era", said the president of the Favoritner.

In view of negative equity of more than 19 mio. Euro and liabilities of over 79 million. Euro, anything other than the approval of the members would have been a surprise. As an alternative would have been in all likelihood insolvency. Board member Gerhard Krisch noted that operational projects would now be set up to cut costs and increase revenues. In 2022/23, the club should already have a positive balance sheet. "This is the very clear goal."

In sporting terms, there was also good news for the fans. Junior team striker Muharem Huskovic extended his contract until 2025. The 18-year-old attacking player already played for the U15 team of the "Veilchen" and established himself in the professional team last fall. Huskovic also made it into the Austrian U21 national team.

"This extension, even over this period, is a clear message of how attractive this new, progressive Austria path is for young players – both internally and externally", said sports director Manuel Ortlechner. Several clubs are said to have shown interest in Huskovic after his contract originally expired in summer. Werner was also already involved in the talks.