32.000 Drumsticks, 18.540 kilos of make-up and still no end in sight: The Blue Man Group celebrates anniversary and successes.

In 15 years you are still there! Hardly anyone who was there in 2004 when the Blue Man Group show was first staged would have believed this prophecy. This was not a mainstream Disney musical, with which one fills a large theater quite surely, but a crazy performance art show, which did not exist in such a way in Germany yet.

The musical director of the unusual show, Jens Fischer Rodrian, was there from the beginning and can still remember what a risk it was to bring the show with the three blue men onto the stage. However, at that time he was already one of the optimists as far as success was concerned. After all, he had played in the Blue Man band in Boston for five years, playing electric guitar, bass guitar and the Blue Man zither, an instrument with a melody part developed especially for this show. He had to learn how to play, but it was easy for him. After all, he had just finished his music studies in the USA.

He got the job in the blue band rather by chance. Actually, he had applied for the musical "Stomp" in New York, but the audition was unsuccessful. On his way home, he passed New York’s Blue Man Theater, actually just wanting to see if there were any discounted tickets available. Coincidentally, applicants for the show’s casting were just expected in Boston. He was mixed up and introduced to the musical director, with whom he hit it off right away. And so the story took its course, a typical New York fairy tale that happened in one way or another.

He was called to the Berlin production in 2003, when the "Blue Man Show" was to be staged for the first time outside the USA, then at the Theater am Potsdamer Platz. On 9. May was the day. Everyone involved was overwhelmed by the success.

After only two years of playing in the large theater, they moved to the former Imax Theater, which also accommodates more than 600 people, but has a much more intimate atmosphere. Especially in this show it is important that the audience always has the feeling of being close to the actors, of being able to be involved in the show at any time.

"But no one has to tremble," reassures Jens Fischer Rodrian. "When the blue one senses that an audience member doesn’t like to join in, he naturally takes that into consideration and leaves him alone."

A break with a program

For its birthday, the show has been revamped and enriched with new elements. It now lasts two hours, making it the longest of its kind in the world. This also includes an intermission, which, however, is only apparently an intermission. Because as soon as the audience steps into the foyer, they see the unusual musical instruments of the blue men and are allowed to try them out for themselves. This includes a white sewage pipe, original from the USA.

What is the secret of the show’s success, which has been running in the U.S. for 25 years and has not yet been cancelled in any of the major cities?? It is a performance art show that appeals to very different target groups, says Jens Fischer Rodrian. Children are interested because the Blue Men have a playful way of approaching things similar to their own.

In adults, they evoke the memory of their own childish playfulness particularly vividly again. When drumming is done with color, everyone is thrilled: "It’s a journey through very different moods."

Finding suitable performers is not that easy. Three of them are on stage every day except Mondays, seven in total. You need actors who can drum well and communicate without using speech. Drummers with acting talent are sometimes taken as well. Contrary to what you might think, mimes are often not so good because they exaggerate the expression too much. "The Blue convinces through reduction," Jens Fischer Rodrian knows from his many years of experience.

Much success requires much blue color. Since the beginning of the show 18.540 kilograms of blue makeup applied and 20.000 head parts consumed to protect ears and hair, also 32.000 drumsticks for the 22 drums. Five million viewers enjoyed the blue show in Berlin alone, 35 million worldwide.

More about the topic 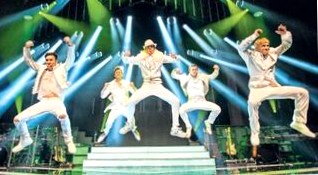 The origin story sounds like another New York fairy tale: In the late 1980s, three young men had created the performance as an off-off-Broadway show. Then came the worldwide success. That teaches: It does not always have to be Disney.