First of all, it depends on the type of tree, what options you have for fixing it. Ideal are trees whose branch forks form 90° or 45° angles, i.e. z.B. Oak and beech. Mature, healthy specimens are particularly well suited for a tree house construction directly in the tree. Walnut trees, lime trees, ash trees, willows and chestnuts can also be well suited. High-growing taproots such as pine and fir are suitable for tree house constructions between several supporting trees. Another important characteristic of ideal tree species, such as oak and beech, is that they can quickly close wounds. In constructions with dunnage screws, these are enclosed by the tree over time, which further increases stability (more details below).

In addition to the type of tree, of course, the age, size and individual shape of the tree plays a role. Only healthy, more or less mature, but not yet too old trees can compensate for the additional stresses caused by the weight and wind attack area of the tree house. Trees that are still growing strongly can be restricted by the construction and u.U. die as a result, or else blow up the structure. In the case of solitary trees, the risk of lightning striking the tree should also be assessed.

You can get a first impression of the tree’s health by inspecting the root zone: The transition from trunk to soil should have intact, healthy bark. The soil above the root area should be compact and not a footpath o.a. lead over it. Examine the trunk for possible injuries. Also a knock with a piece of solid wood against the trunk, can give information about whether there are cavities inside because of the sound. An arborist on site can tell you if a tree not only looks healthy, but actually is healthy. 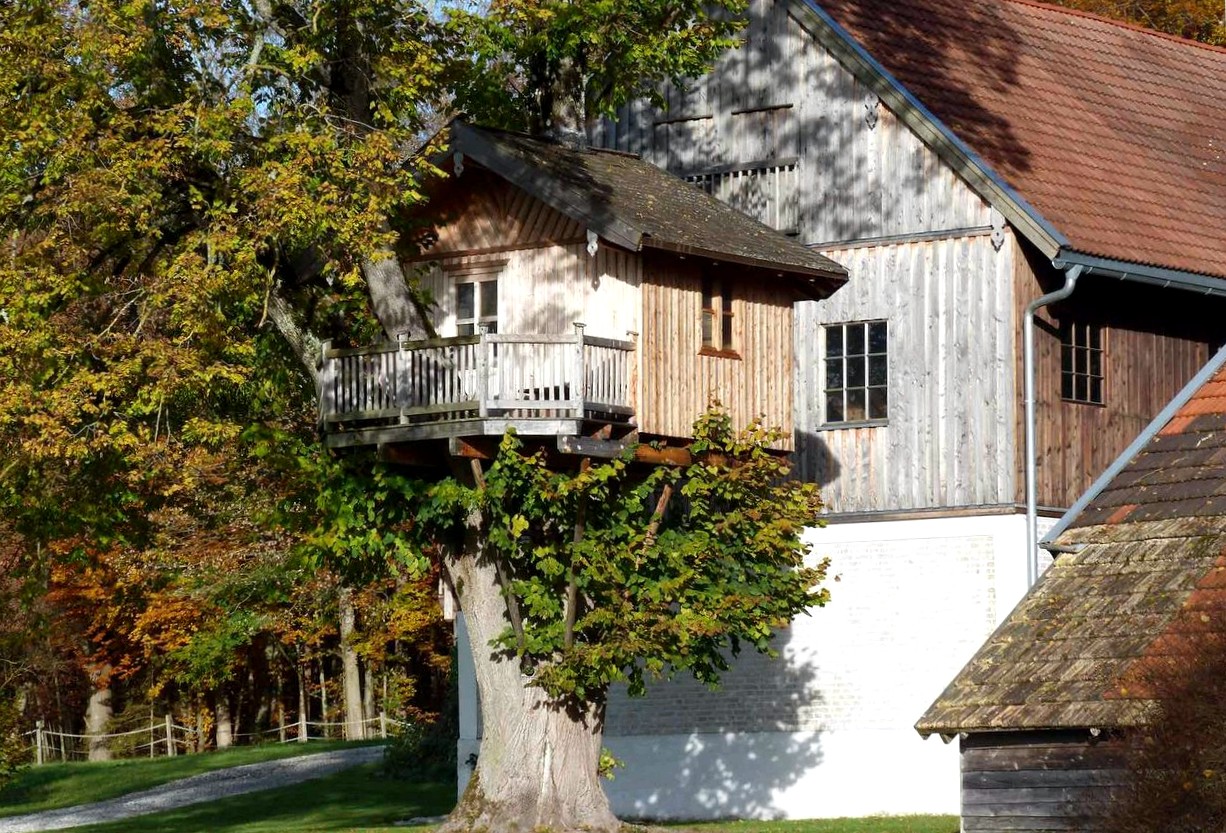 What are the fastening options?

There are four possible methods for fastening or suspending a tree house (and if applicable. their combination) are in question: bolting, clamping, hanging and supporting.

In modern tree house construction, for large dwellings with corresponding weight, often so-called Garnier screws used as anchoring technique in the tree (left picture shows the standard Garnier Limb®). The trick with this method is to keep the number of connections between the tree and the tree house as small as possible, but as resilient as possible. Garnier bolts are long, heavy bolts made of steel with a diameter of 3 cm, which are driven into the tree and each of which can be loaded with up to five tons of weight. Large, sturdy trees more easily tolerate one or two such bolts than several small bolts and nails, which stress the tree and are less stable anyway. Garnishing screws ultimately act like an artificial branch. 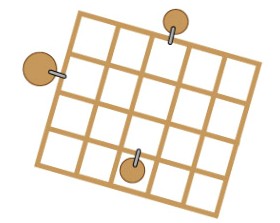 Fastening the platform for a tree house between three trees, each with a garnishing screw, could then be z.B. look like in the picture on the right: The platform is firmly fixed to one of the garnishing bolts, and rests movably on the other two bolts.

Specifically, attaching the bolts looks like screwing the threaded part of the garnishing screw, which is about 15 cm long, into the tree, and also countersinking part of the round disc-like middle section. At the other, 15 – 30 cm long end of the bolt (to give the tree room for thickness growth) a supporting beam of the treehouse is attached by means of a metal shoe at some distance from the trunk. In this technique, the tree is therefore not constricted by bolted beams. The central part of the bolt, the "round disc", is optimally enclosed by the tree over time, which, as already mentioned, further increases the stability of this connection. 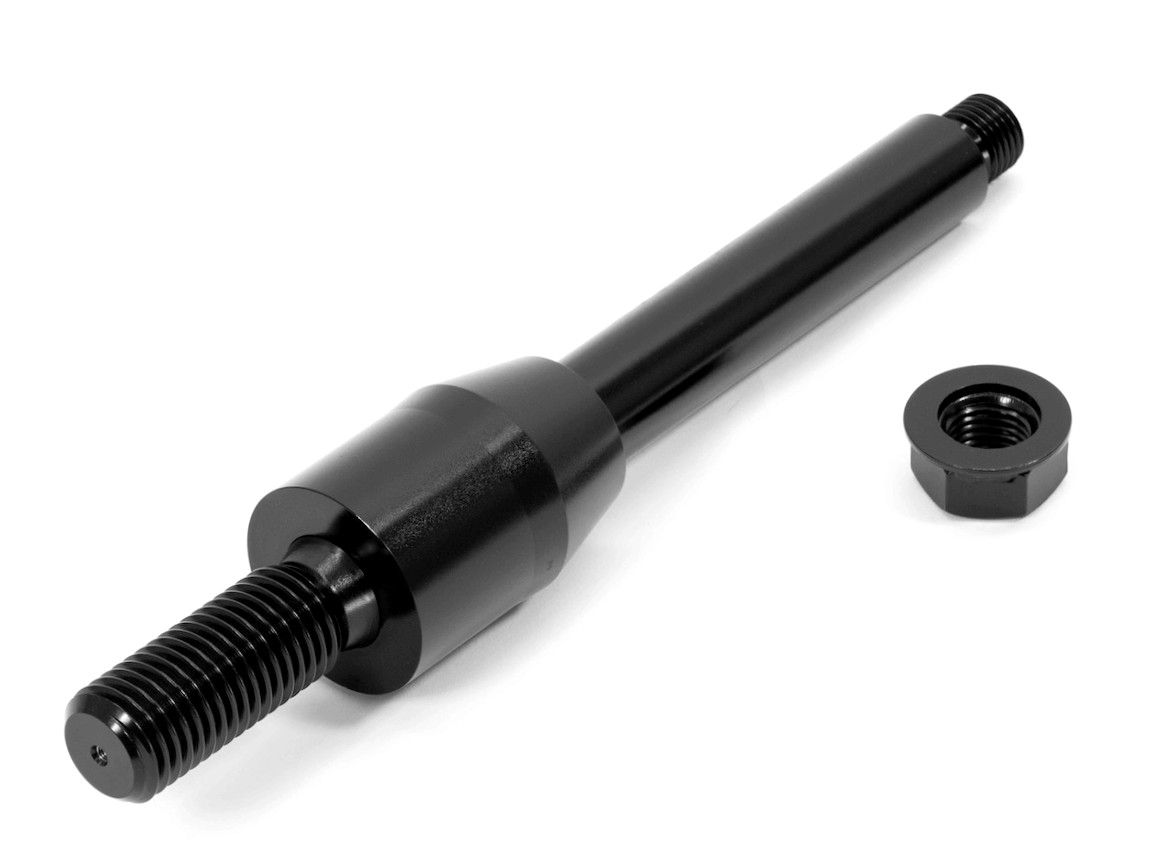 The forerunner of the garnishing bolt was developed in the late 1990s in the USA by a construction specialist named Jonathan Fairoaks and improved by treehouse hotelier Michael Garnier together with his engineer Charlie Greenhouse, who applied for approval and registered it as a trademark product. Since then, this bolt has been marketed under the brand name "Garnier Limb®" (dt. garnishing screw) known.

A (as the name suggests) German further development of the Garnier screw are the "German Treehouse Screws" (see picture on the left), which are available, along with other materials and expertise, from "The Treehouse Shop" – Europe’s first online store for treehouse items.

A particularly gentle method for the tree, provided that continuous maintenance is ensured, is the clamping technique, in which an adjustable metal collar is placed around the trunk and tightened. Beam shoes for the wooden structure are attached to this collar. The metal collar must be regularly checked and, if necessary, repaired. are loosened slightly so as not to constrict the tree. The clamping technique is a method preferred and constantly developed by the French tree house company La Cabane Perchee.

In this method, the treehouse is suspended in strong branch forks using steel cables and textile loops (which are gentle on the bark). If only this technique is used and the tree house is not fixed otherwise, it will swing in the wind. An effect that should definitely be taken into account. Examples for this method are Clara’s tree house and the "geodesic" tree house sphere from Luftschlosser.

This method uses beams to support the tree house from below. It can be used alone, which will then result in a stilt house, or in combination with the other methods, to support a portion, such as.B. the terrace.

In all methods, attention must be paid to the fact that the tree can still move in the wind, otherwise, when the wind reaches into the crown, forces are created that can tear the structure apart. If several trees are planned, the house should be firmly connected to one tree at most and the connections to the other trees should be movable in some way to avoid tensions in the construction. The amount of movement (and thus slack) that must be anticipated depends, first, on the height at which the base of the treehouse or. the connections are attached, on the other hand by the elasticity of the tree and the exposure of its location. This point alone makes it advisable to involve a tree house construction specialist in the planning process. 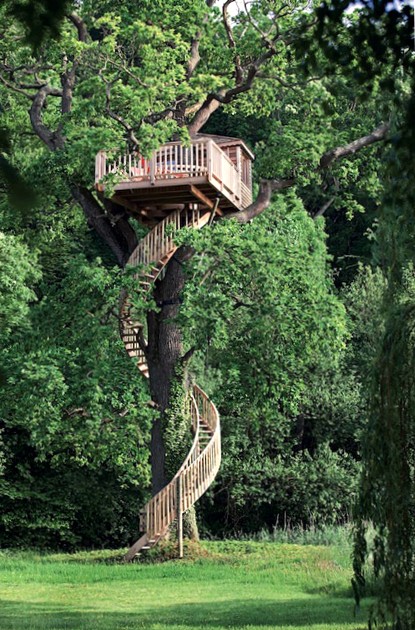 Tree house by La Cabane Perchee in France, with the spiral staircase around the tree typical of this provider.