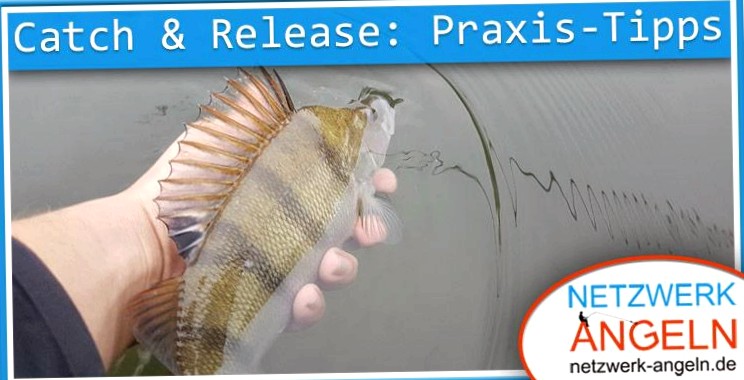 As an angler, you’re always going to find yourself in a situation where you need to put back a fish you’ve caught. This process of catching a fish and then releasing it is described by the term catch and release.

The reasons for Catch& Release can be very different, there are sometimes legal regulations that explicitly require the release of the caught fish. For example, if the fish was caught during the closed season or has not yet reached the necessary closed size. Furthermore, it can happen that you have already reached the catch limit for a species and then have to reset a fish caught beyond that as well. In addition to the legal requirements that take this decision away from the angler, it can of course also happen that it is simply the angler’s decision to release a fish for many other good reasons.

On the broader legal aspects of Catch& Release can be found here at Netzwerk Angeln 2 very detailed technical articles:

Especially for beginners it is sometimes quite a "technical" challenge to put back a caught fish quickly and safely. In this article, I would like to give a few tips on what I personally pay attention to when resetting so and how you get perhaps also as a beginner a certain security in dealing with fish and can quickly acquire some routine in this topic.

Who once read my author introduction, knows that I come from one of the largest carp breeding areas in the world and therefore also have some experience in fishing / pond management. Even in pond management, you have to deal with live fish – but in comparison to fishing, you don’t have to deal with just one fish, but with hundreds or even thousands. This means that you often do not have the time to take care of the single fish for a long time.

Nevertheless, as a pond keeper you have a great interest in handling your fish, which are ultimately the pond keeper’s capital, in such a way that they survive fishing and transferring without damage.

The following tips that you can follow when putting back fish are based on my personal experience in pond management and even more on my experience as an angler. They should show as simply as possible and also for fishing beginners to some extent comprehensibly how a releasen can succeed simply and surely.

Just have a look at it and if you can take away some things for yourself, all the better.

When releasing fish there are a lot of small details you can pay attention to – but from my point of view it is important to have a look at the most important and essential factors when releasing caught fish. If you follow 3 simple rules, you have already done a lot to make it possible for the fish to live on. 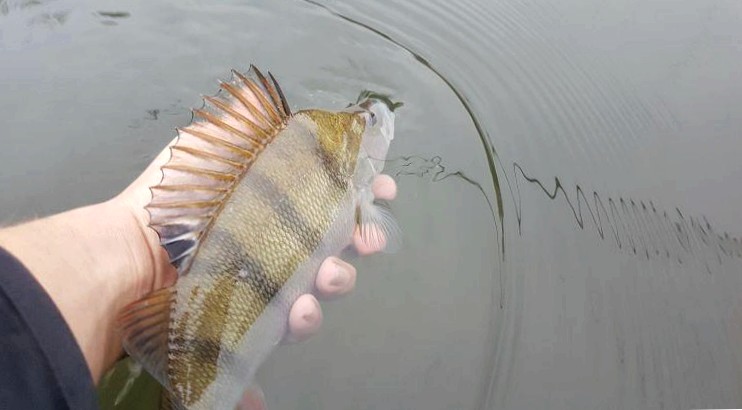 Fish have a mucous membrane that protects them from the penetration of pathogens. If you handle fish with your hands, it makes sense to always do this with wet hands. The mucous membrane is then clearly less strained. A fish does not die immediately if you touch it with dry hands and even I sometimes forget to wet my hands in the heat of the moment. Basically you should just do it – it’s no effort to moisten your hands for a short time. It takes 2 seconds and costs nothing.

An important factor when it comes to how well fish tolerate a release is not only the water temperature but also the so-called air exposure – i.e. the time the fish spend in the air. How well fish can cope with this depends on the fish species. For example, carp are less sensitive than salmonids.

I take care of the fish quickly after catching it, so that I can quickly release it back into its element. The more often you put back fish, the safer and quicker you will succeed in releasing them.

Especially at higher water temperatures you have to be really fast with some fish species. Especially with walleye and salmonids it can quickly become critical in the summer months. 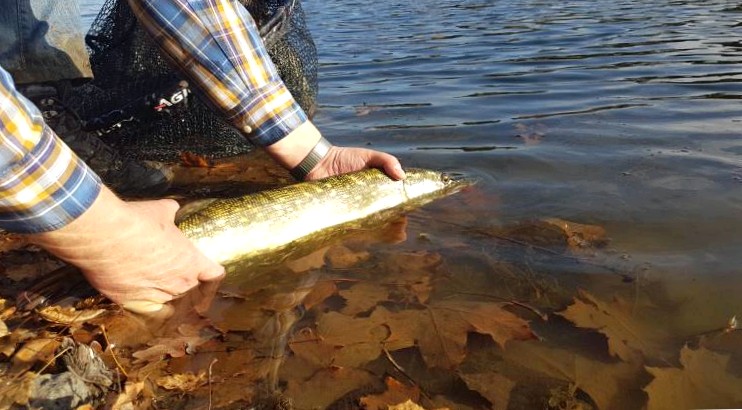 When the fish breeding ponds are fished out in the fall, it often has to be done quickly, there is not much time to take care of each fish individually. One takes care not to expose the fish to unnecessary stress and, if possible, to bring them quickly from "water" into "water". Despite the rather robust handling of fish in pond farming, they usually survive fishing and subsequent transfer very well. Even with somewhat more sensitive species such as walleye, I have been able to determine survival rates of 100 percent after transfer measures several times.

Due to my experiences in the pond industry I have a more pragmatic view on the release than some of my angling colleagues, because as long as you do not injure the fish, make sure that it is supplied with oxygen-rich water or that the fish is not in danger of being killed. If you don’t leave the fish without water for too long, many fish species can be reliably transferred without too much effort. 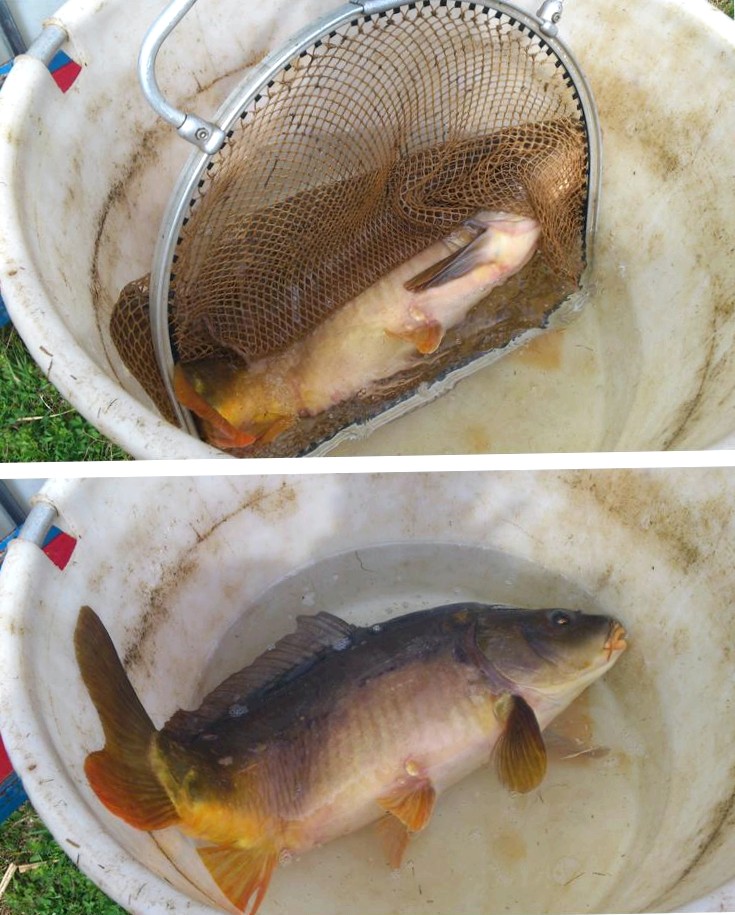 In pond management it is sometimes much less gentle

As an angler you have the great advantage that you only have to deal with one fish. It is relatively easy to make it even better and to take care of the one fish that is to be put back. This includes z.B. also a careful reset. Once the fish is back in its element, you can carefully support and stabilize it until it is by his own strength swims away. Depending on the circumstances, this can take a few minutes. 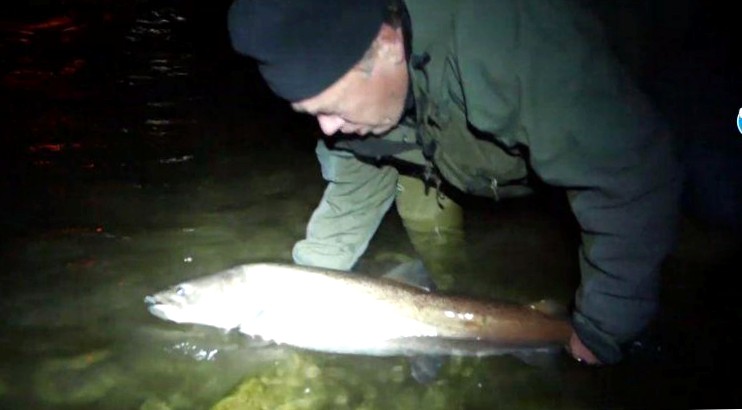 During the release, the fish (here a huchen) is supported by the catcher Franz Keppel on the belly and loosely held at the root of the tail

If you haven’t made any big mistakes, and the fish eventually swims out into the lake or river under its own power, you can be very sure, at least according to my observations, that it will survive the release. However, if you have caught fish from a slightly greater depth from a boat, you can sometimes deviate from this rule and bring the fish back "to depth" in colder and more oxygenated water as quickly as possible. If you have ever wondered why the anglers in some movies "throw" pikeperch or pike from the boat relatively ungently head first back into the water – this is exactly the reason.

Equipment that helps when putting fish back:

There are some pieces of equipment for anglers that can be helpful when releasing fish – some of the tools that make releasing fish a little easier I present below. 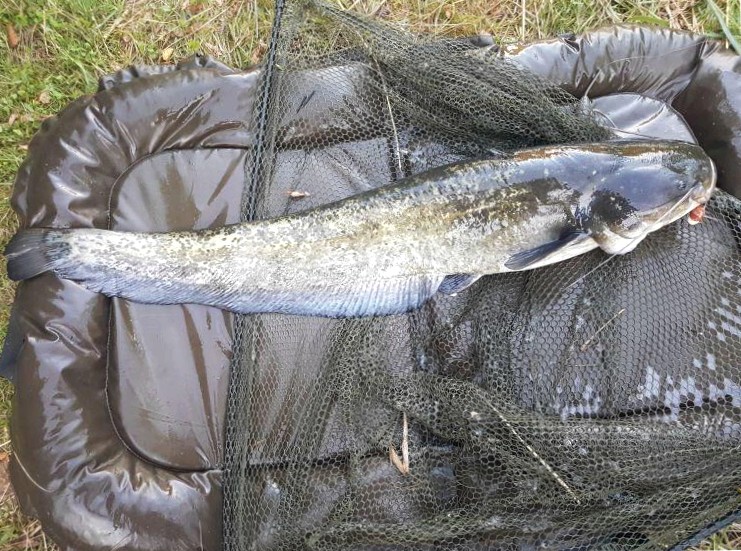 Well padded: a unhooking mat provides valuable services for angler and fish when resetting the line

If the fish cannot be unhooked directly in the water, we have to put it down somewhere to be able to take care of it safely. For this purpose there are so called unhooking mats. If you wet such a padded mat with plenty of water, the fish can be placed very gently and safely taken care of. In addition, the fish can also be carried safely in a unhooking mat.

Not only for unhooking, but also for re-setting, a unhooking mat comes in handy

If you don’t have a unhooking mat or you are out spin fishing, you can also take a tarp or a large bag with you and then wet it with plenty of water. If you don’t have such a thing at hand, you should at least take care to place the fish on wet grass or wet leaves. What you should avoid is putting the fish down on sand or dirt, that can actually damage the mucous membrane. 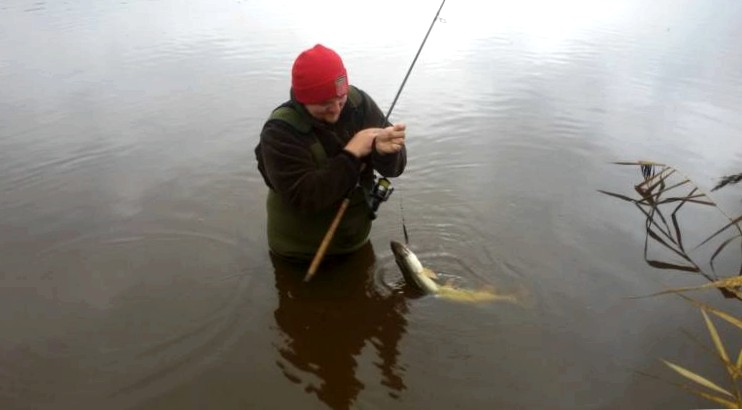 The ideal case: this pike by author Franz Hollweck can be ticked off right in the water.

A large, rubber landing net is an easy and safe way to land fish gently