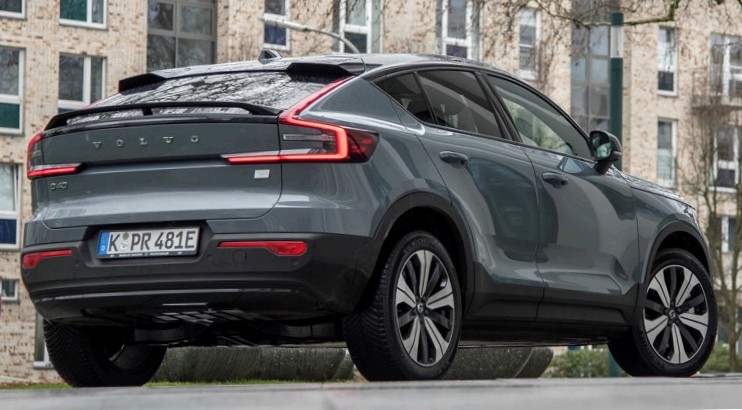 If the clunky SUV monotony has become too boring for you, Volvo offers a quirky alternative with the C40.

Along with Jaguar and Lexus, Volvo is one of the brands you consciously choose because you want to drive something different. The new C40 is completely different – and only electric.

Saab drivers used to be the crazy ones. Architects, doctors, and people from advertising agencies drove cars of the other Swedish car manufacturer. Then GM came along and put the kibosh on the one Swedish brand. In ten year steps happened. In 1990, GM bought into 50 percent, took over everything in 2000, to actually wind down at the end of 2009. But there was hope again. Chinese wanted to take the helm, then Dutch and again Chinese, who finally bought the remains of Saab in mid 2012. Not much has happened since.

In any case, the individualists among the business car drivers have had one alternative less. Good for Jaguar (part of Tata/India since 2008) and Volvo (part of Geely/China since 2010). While Jaguar struggles with little choice despite good cars, Volvo has prospered for years. Here, the headquarters in China (Geely) seems to give the headquarters in Gothenburg (Volvo) quite a free hand – at least in vehicle planning and design.

Coupes are in trend, not real

Latest throw: the C40 Recharge Twin. It is a compact mix of CUV and "Hot Hatch", as the British like to say. The term usually refers to a powerful compact car: small and strong. Small is relative, but the C40 with its 4.40 meters is a real compact car. The height is more SUV-like, but at 1.58 meters it’s also barely higher than a Renault Zoe. The C 40’s powertrain does not make it a hot hatch. It’s always electric, but it’s double the fun. As with its more classic brother, the XC 40, and its corporate cousin, the Polestar 2, there’s an electric motor in the front and another identical one in the rear. These two do not only make the C40 a four-wheeler, they also unleash a combined 408 hp on the wheels. The feeling when depressing the accelerator pedal is thus clear: gigantic. The kick in the back comes on request unexpectedly and instantly and it doesn’t end until you reach the maximum speed of 180 km/h. Even at the intermediate spurts only little comes behind, which has turbocharged six and eight cylinders. 660 Newton meters of torque speak a clear language.

Do you need the? A very clear no. This already becomes clear when one is "civilized" on the road. Because the C40 is never really economical. This is partly due to the temperatures prevailing at the time of driving and the all-weather tires that are always fitted, but they work well. Whether you get Michelin or Pirelli is written in the stars. On the other hand, the lack of efficiency is due to the drive and the large frontal area and a CW-value of 0.33 with which the C40 braces itself against the wind. If we drove the Polestar 2 with same drive in the summer still with approximately 25 kWh, this will not be realizable with the C40- especially not when you’re on the freeway.

Perfect in the city, actually

Whether it really spends a lot of time there, however, is doubtful. The Volvo is a big city Indian that does almost everything right on the way to the office (except for the lousy visibility, but name new cars with a good one). On the weekend trip to the countryside he also makes fun – at least if the range can be calculated and "full throttle stages" are also possible to the fun should be. Especially overland, the chassis convinces with a successful compromise between directness and comfort in combination with the 19-inch mixed tires.

Charging is done via 11 kW at the wallbox that is standard or with up to 150 kW at the fast chargers. Volvo states that it takes around eight hours to fully charge the battery in the garage, and 70 percent of the battery can be filled in less than 40 minutes outdoors theoretically. About 75 kWh of the battery capacity can be used, a large and heavy battery just- After 270 kilometers, a charging station should appear on the horizon. From May a front wheel drive version will be available, with 69 kWh battery pack. This weighs around 140 kilograms less. 2.2 tons are currently pressing on the scales and only a narrow 400 kilograms may be "on top of it. That should still be enough for four people and luggage. More don’t really fit in anyway. The space in the front is good, in the back it is as expected at the head tight, for seat giants, which is also due to the standard panoramic roof. The roof cannot be opened or darkened, but it is specially coated to keep the heat out in summer. 413 liters fit into the luggage compartment, which is okay for this segment.

80 percent of all Volvos are XC90, XC60, XC40 and soon C40. The segment is still booming for the Swedes. 48.8 percent of all Volvos have a plug that provides electrification. So far, however, not three percent of them are purely electric. This will certainly increase with the C40 produced in Ghent, Belgium, as it is now only available as a BEV (Battery Electric Vehicle), as mentioned. Volvo estimates that by the end of 2022 about 55 percent will be powered by external electricity. The share of BEV should increase significantly, although PHEV will also become more attractive. Because here Volvo has increased the battery size and the batteries have from now on mostly 18 kWh capacity. In the fleets so far still the XC60 before the XC40 are the most in demand in Germany and both are up compared to last year.

The C40 will surely find its friends in the fleets. It seems fresher than the brother XC40, which is also produced in Ghent, and has hardly any disadvantages (a little less space, worse overview). Volvo still compensates for the lack of Apple Carplay with a theoretically well-functioning Android Automotive and an iPhone connected via Bluetooth. Unusual, but I guess that’s the price of being a car manufacturer and getting involved with a giant like Google. You don’t seem to be able to operate quite freely anymore- too bad, because surely a large part of Volvo drivers are Apple users- fits somehow better, also to Saab.