Field trial in London How I tried shopping in cashierless Aldi

I approach the barrier. Nothing happens.

After about a quarter of an hour in the Aldi of the future, I quickly grab a bouquet of roses at the exit for my spouse, who is probably sitting in a zoom call at home in the home office right now. And I ask the nice and patient Aldi employee – it is the same as before – what I have to do now. "Just step up to the barrier. You don’t need your phone anymore, the barrier should open by itself."I approach the barrier. Nothing happens.

The employee briefly snorts something under his mask, picks out his cell phone, quickly generates a QR code, which he holds over the scanner at the barrier. The door opens. There, please, all good, done, he then says. 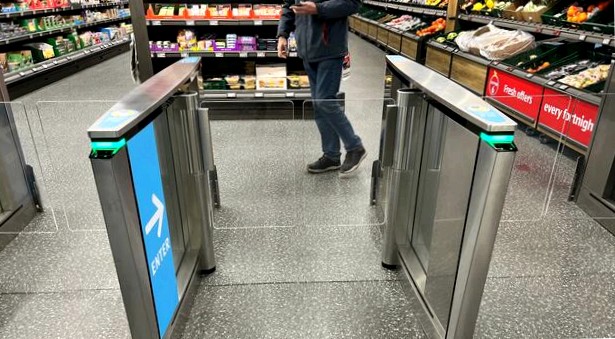 Once the app is installed on the phone, the doors should open automatically

Well, the barrier should have opened on its own, but it didn’t, I note. Is it perhaps because of the gin in my pocket? "Ah, that must have been the reason," the Aldi employee then says. And explains that if you buy alcohol, you still have to do an age verification in the app while shopping, which, if I understand him correctly, works by taking a selfie and then letting the app decide if you look older than 25 or not. In its press release, Aldi stresses that if you don’t want to use the app for this, you can have one of the staff do the age verification on the spot and without a photo.

The system is already running quite well and the customers are satisfied, says the employee. "But it’s also brand new. We get feedback from our customers. The system gets smarter and better the more people shop here." I thank him and make my way home.

Find the best jobs now and
be notified by e-mail.

About 20 minutes after shopping, my phone vibrates. My bank’s app shows that Aldi charged me £36.64. That sounds already good.

At home I spread out all the purchases and download the invoice, which also arrived attached to an email. At first glance, it seems amazingly accurate: It does not include the cookies I carried for a walk and then put back again. The croissants and bread are just as correctly accounted for as the single avocado.

But then I see the first mistake: I was charged for two packs of mixed nuts, but the pecans are missing. Even the pack of almonds, which I briefly looked at but put back, is found again on the bill. And only one pack of eggs was accounted for instead of the two I purchased.

I have the app show me the bill and click that I want to change something. The app lets me click on the items I was incorrectly charged for. The request is checked, it then says. There is no way to charge for the missing items. Since I don’t want to start a career as a shoplifter (and certainly not while I’m at work), my only option is to open a contact form and tell Aldi my concern in writing.

About an hour later, I get a notification that Aldi has accepted the requested changes. My app now shows me an updated bill: It is £31.57, a little five pounds less. In a country where costs are currently exploding on all fronts and where millions of households have to turn over every pound twice before spending it, this is not a good result. But there are still three items missing that were in my pocket but not on the bill. All in all, the final amount comes out reasonably well.

Cashierless shopping already works surprisingly well. However, the time advantage gained disappears at the latest when you have to complain about incorrectly invoiced items and click through app submenus. Less tech-savvy customers might just decide to let it go – and leave the bugs in the system uncorrected.

On Google Maps, the cashierless Aldi has an average rating of 3.2 out of a maximum of 5 so far. Most other Aldi stores in London make it to the big 4.3. Several customers complain of trouble with incorrect bills. Someone wants to have discovered ten wrong articles on his bill. A customer addresses another problem. He writes that shopping at the cashierless Aldi reminds him of a dystopian TV series: "You are watched like in ‘The Handmaid’s Report,’" the review reads. He is not wrong. In privacy-conscious Germany, monitored shopping is likely to scare off many potential customers. In London, people are used to cameras on every street corner and are perhaps too uncritical of such things.

This is what WiWo readers are particularly interested in today

Intelligence The IQ paradox of performance

K funding stopped Forget Habeck: Renovation with state aid is possible in other ways, too

What else is important today, read here

I personally found the experience interesting. Above all, the fact that you don’t have to stand at a checkout and repack things, but can leave (more or less) immediately, is incredibly pleasant. It made me think about how many days of my life I must have spent in boring supermarket queues. But the errors in the invoice are annoying – especially the fact that you end up sitting at home with unpaid items that you can’t add in the app afterwards. I didn’t get an answer to my message to Aldi until this evening.