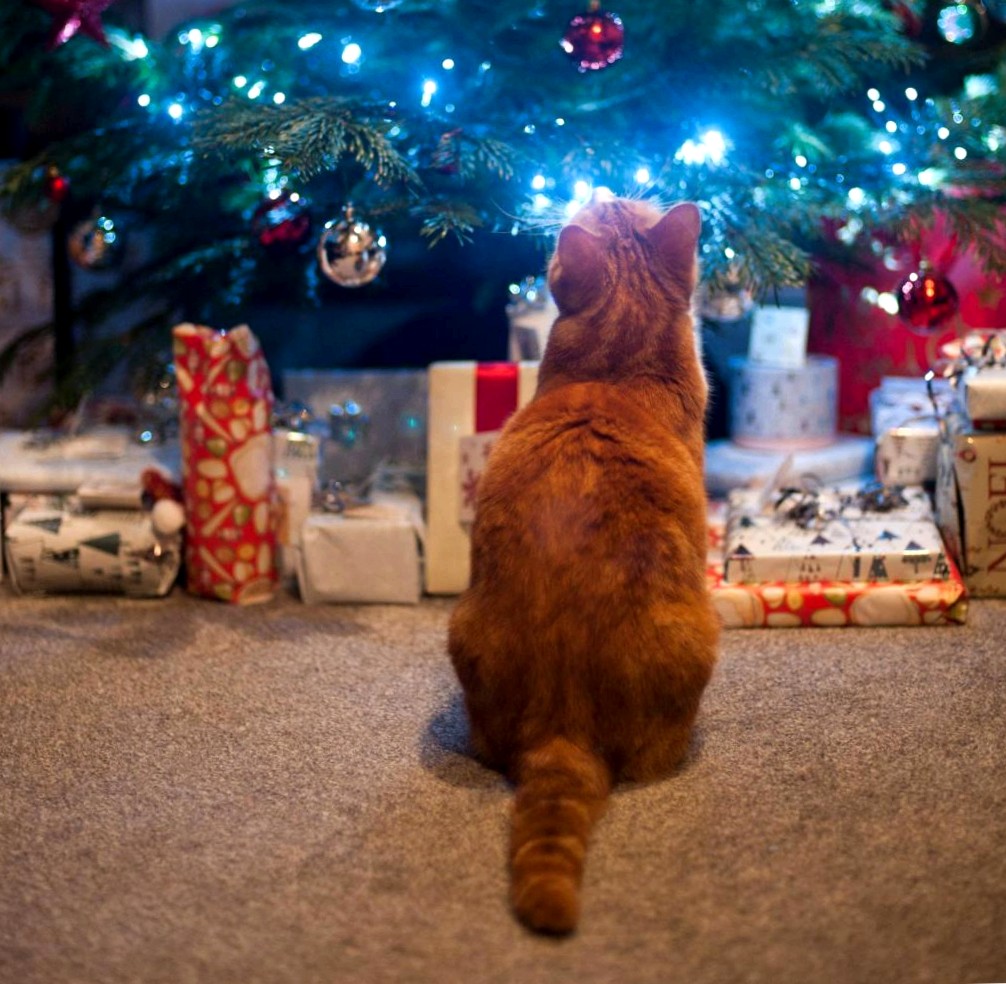 I t was the last weekend before the big celebration. As a father who often travels alone, I had often thought of surprising my children with a trip that would fit this time of year. Last year was the time. We had a date for an Advent tea.

That is to say: I had an appointment and decided to simply take my daughter and eldest son: to the children’s book author, writer and illustrator Judith Kerr. As we were to learn from her personally, she herself prefers a different order: "First a draftswoman. Then children’s book author. And then a writer."

My daughter was thrilled: "Really? Judith Kerr?" She had read the autobiographical novel "Als Hitler das rosa Kaninchen stahl" (When Hitler stole the pink rabbit). The journalist Alfred Kerr had managed to escape arrest at the last minute in the spring of 1933 and take his family with him: to Prague, to Switzerland, to Paris and finally to London.

In a total of three books, Judith Kerr has told of her escape from the Nazis. Now my eleven year old daughter could meet the girl from those days. At the age of ten, it had to leave behind its toys, its books, its friends and German Christmas. Judith Kerr, now 94, had fled the same city where we live! I could feel that my daughter was excited.

My son was also delighted: he knew Judith Kerr as the creator of the creepily hungry but friendly tiger who drops in unexpectedly on a family for tea and ends up drinking the tap dry. "The Tiger who came to tea" is a finely drawn allegory on fear. Very topical – a fitting theme for our time.

On the way to Judith Kerr’s home in the Barnes neighborhood, it was easy to forget our appointment for now. No sooner were we on the street than the city’s Christmas fever hit us – the Christmas craze was gripping us. On the one hand we knew it from home: a city full of splendor, reflecting all our childish wishes. On the other hand, it was much more shrill than at home. Alone the strange clothes of the people!

We saw lots of Christmas sweaters, a British Christmas custom I would describe as "Christmas belly". As if breastplates had been made from knitted bedspreads to scare off attackers with crazy motifs. You can’t miss it! Several times my son called out, "Dad, did you see that one??"

In the subway, he was amused by a pack of drunken deer. About Jesus, who has a sign around him: "Birthday Boy". About a Santa Claus shouting "Ho ho ho", his coat open, his legs bare and in front of his privates the sign "censored". Or simply about the phrase "Happy Crimbo!" It comes from the children’s language and means "Christmas.".

As we turned into Judith Kerr’s street, the Christmas fever suddenly subsided. She lives in an ivy-covered brick house, in the middle of a typical row of Victorian-era houses. The front door was decorated with a fir wreath and a red ribbon – they say: a wreath (rie-b) and a red ribbon.

As we approached the door, we noticed a fat yet elegant cat. Calmly she woke up on a window ledge. Every now and then she blinked her eyes as if she wanted to greet us in a discreet way. And because the three of us were thinking the same thing, we asked the same question in chorus: "Mog?"

Mog is a cat in Britain and a tomcat in Germany, which already makes the animal in need of explanation. But more about that later. Above all, the fat mog was a weighty reason for our visit to Judith Kerr, because it is another of her animal creations. Although "Mog the forgetful cat" was born in 1970, it was only two years ago that Mog became the official Christmas cat of the British.

She owes this to the supermarket chain "Sainsbury’s", which had asked Judith Kerr to breathe life into the commercial "Mog’s Christmas Calamity. The result was a computer-animated super Christmas cat that made Mog more famous than ever – the Christmas commercial rocked the cat to fame.

Mog’s "Christmas calamities" are quickly told: The cat lives in a family that, like all Britons, lies in bed on Christmas Eve and dreams of the next day. Christmas in the United Kingdom traditionally begins not on Christmas Eve, but on the 25th. December – "Christmas Day. Only the English royal family celebrates out of old German tradition already on 24. December.

After the horror, the neighbors come over to help the family clean up the destroyed apartment, and to celebrate Christmas with them. They bring a new Christmas tree, a new turkey and presents, all from Sainsbury’s of course. If you watch the movie on YouTube, be sure to look out for the old lady who suggests giving Mog a medal!

Meanwhile, this very lady opened the door for us and invited us in. She is surprised to see two children standing in front of her as well. Like little tigers! But she is happy. We take off our jackets, take off our shoes and follow her to the kitchen where she serves us drinks. On different tables there are plates with cookies.

"My cat’s name is Katinka, not Mog," Judith Kerr explains to us without being asked. So that the children understand her, she speaks German: slowly, clearly, with a high voice and a slight English accent. "I have to think, some words don’t come to mind right away. Besides, German is my childhood language. I sometimes think and feel very nice things in German." My son wants to know if she has a dog too.

"Then I’ll tell you: mutt! My father was born Alfred Kempner and gave himself a stage name that was an insult in exile!"

My son makes big eyes. Judith Kerr’s mother had decided to pronounce the surname like Kahr from now on. And also her daughter still attaches great importance to it!

So it is Judith Kahr, the super Christmas cat creator we meet. Despite her advanced age, it’s easy to see in her the girl who began her life in Berlin and who experienced ten Christmases there.

"We were Jewish, but it was also a tradition in our family. My father played the piano and sang ‘Silent Night, Holy Night’ and we were allowed to stay awake all evening, unwrapping presents and admiring the tree with the candles. My parents knew: For a family there is nothing more beautiful than this feast."

"Isn’t the party in England so beautiful?"my daughter wants to know.

Judith Kahr shakes her head: "Of course, it’s also nice to unwrap the presents in the morning. But it was never like Christmas Eve with us in the past. Never so intense, so heavenly, so magical. And for us adults it is not so nice either."

"Because the kids get you out of bed early in the morning. And because we prefer to drink wine or champagne in the evening rather than at nine in the morning. That’s how the English do it, and they’re usually pretty drunk by lunchtime."

Gruffalo is a hit

In the meantime we are sitting in the living room of Judith Kahr, I have a tea, she and the children are drinking orange juice. Katinka is eyeing us. Suddenly there was a flutter in the hallway! A package has arrived, Judith Kerr asks my son to get it and he can’t believe it: from Germany!

By Axel Scheffler, the creator of "Gruffelo! The cover is painted with figures and letters. "Axel always writes to me at Christmas," says Judith Kahr, who is visibly pleased. "He is a great man. And …", then she switches to English: "…the Gruffalo is also quite a hit in the UK, only a different spelling!"

A good moment to ask them why Mog is a tomcat in Germany. "Ach!", Judith Kahr hisses back: "The German publisher wanted it that way: ‘This must be a tomcat!’ A cat without a cat, but with little kittens? I was against it. But the Germans seem to like ‘tomcats’ more than ‘cats’. The British love ‘cats. In this point I am British!"

Judith Kahr’s negotiations about the cat-cat or cat-cat did not remain the only fight about Mog. "The Germans also found ‘forgetful’ too negative," she reports. "Mog was not allowed a cat and was not allowed to be forgetful! But I have prevailed. Because being forgetful is also good: Mog can forget things and makes use of it. Of course, he, she or it is very forgetful. That’s the whole point. That’s the irony!"

Irony! My daughter is very attentive when Judith Kahr explains, "What would we humans be without irony?! We could not understand life at all. We could not survive! But in Germany it is always a bit difficult. Says one: ,It’s raining, it’s a nice day,’ one hears: ‘Why a nice day? It’s raining!’ All German immigrants have their problems with it.

In a literal way

It’s that game with the things you say but don’t literally mean. It can get really difficult and tricky, in particular with everyone in Britain assuming that Germans mean everything they say in a literal way and then they say something they don’t mean literally.

My daughter laughs at the story. Then she asks: "What do you mean? ‘Without irony we don’t understand life and we can’t survive’?"

House in the Grunewald

Judith Kahr rubs her old fingers for a few seconds. "When I came back to Berlin after the war, visited our house in Grunewald after many years, saw the Grunewald train station . "

My daughter interrupts her: "Had you forgotten all that??"

Judith Kahr looks at her with a serious face: "At your age I thought I could forget, and I thought for a long time that I had forgotten. I would have liked to be sometimes as forgetful as Mog: at least a little bit forgetful.

It would be nice if we could forget only the bad, the spooky things, not the nice ones. For example, not Christmas at home in Berlin. But we can’t! We can’t forget childhood. We are not cats!"

Then Judith Kahr moves forward onto the edge of the sofa: "In the end, irony is always the only way to go. Your visit is perhaps a part of it: your interest in my life. To my memories of the wonderful Christmas Eve in a country that kicked us out. That is irony!"

We listened attentively, only Katinka dared to make noise. The big girl on the sofa wasn’t done yet: "The irony is that I’m alive. That I would like to celebrate Christmas Eve in Germany once again.

That I was once a refugee and now sit on a comfortable sofa. That the forgetful cat Mog is famous because he advertises for a supermarket. That I, of all people, told the English a Christmas story . "

There we sat! At the Advent tea, to which we were as surprisingly invaded as Judith Kahr’s tiger. We didn’t drink her faucet dry, but I felt we were allowed to take something from her heart. In the next days we talked a lot about what to forget and what not to forget.

Saying goodbye at her front door, Judith Kahr wished us happiness and peace and great gifts for the kids. "Enjoy London still, and don’t give out too much!" She giggled at her Denglish joke. "The main thing is that you are at home for Christmas Eve. Merry Christmas!"

When we were back on the plane, my children regretted that the British don’t celebrate Christmas Eve. Just before they fell asleep exhausted, my daughter suggested to invite Judith Kerr to Berlin for Christmas next year. And my son promised to paint the envelope.