We provide our articles and fact checks free of charge to all.
Please donate something for our work or buy in our store

The CDU deputy district administrator in the Bautzen district, Udo Witschas, had announced in front of a crowd of so-called "walkers" that he did not want to enforce the compulsory vaccination in care facilities and hospitals planned for March – this was a capitulation to, among others, the far-right movement "Free Saxony". We reported on the far-right movement, monitored by the Office for the Protection of the Constitution, that is rising to the forefront of protests in the East:

This capitulation is celebrated as a victory in the Telegram underground and reaches an above-average view count of over 500K in a very short time: 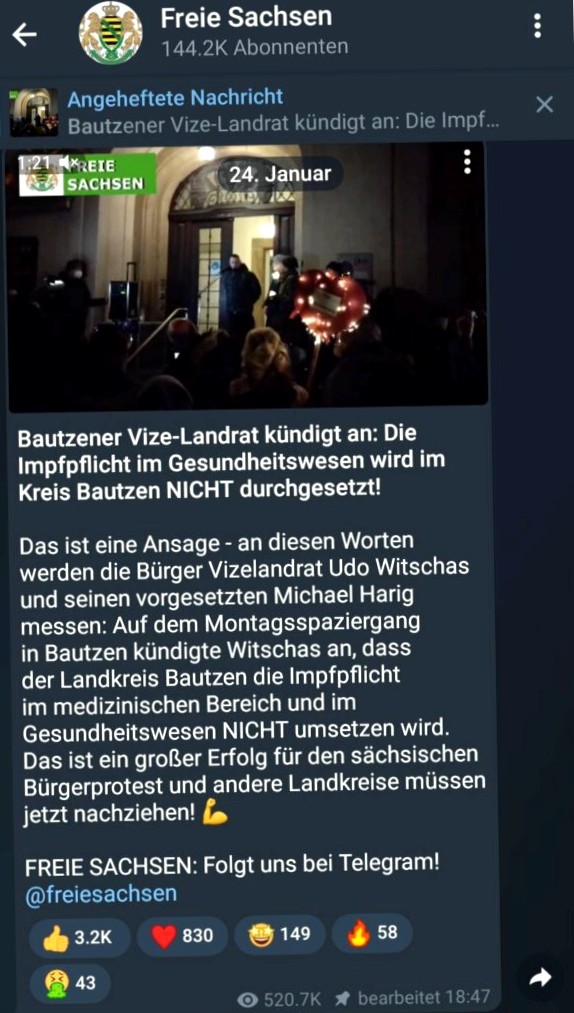 "If you ask me about what the Bautzen County Health Department is going to do, we are not going to ban our nursing and medical staff from working, from entering," Witschas announced to thunderous applause from those in attendance. It should be mentioned briefly that Witschas would like to be elected this year as a district administrator. Witscha’s solo effort is now contradicted by the Saxon state government, more on this later (source).

The story starts relatively harmless: the masses gather unhindered in Bautzen. But what is already unusual here: one wants to "take the vice-councilman to task" as if one knew that one would find him there.

The masses set off unhindered with this march … pic.twitter.com/F86pXHJY51

It should be noted here that the "free Saxons" apparently can send a mass of people via Telegram to besiege authorities somewhere without the police simply read it and redirect the mass, let alone that you do not stop it all immediately. For the next time then simply.

Arrived at the destination as planned, a rally takes place unhindered. The police makes only here an announcement and points quite sweetly to the conditions of a "walk" and asks the pack to move on. The only thing they got for it was laughter:

…completely pointless, one makes fun of it and waits for the vice-county councilor, almost as agreed, to step in front of the crowd … pic.twitter.com/ciDNl5kB5p

One waits thus unhindered for the Vizelandrat. Which then also appears.

What would one actually expect now? Not addressing the masses at all? Step in front of the masses and send them on their way? Not so Udo Witschas, he gives the people what they want to hear and announces that he does not want to implement compulsory vaccination in the health sector. A revolt and announcement of breaking the law, even more so from the CDU? Crowd celebrates.

As mentioned, Witschas is running for district administrator this year:

In #Bautzen, the vice-county councilor of the #CDU makes the announcement that they will not implement compulsory vaccination for the care sector in front of a demo of cross-thinkers:inside and right-wing extremists!

He applies in June for the office as district administrator! &♀️ https://t.co/SzcshFs2uD

Accusations arise that the vice-councilor is open to the right:

A deputy district administrator from #Bautzen, who had also exchanged views with NPD representatives in the past, today allows himself to be arrested at a demonstration by #Querdenken& #FreeSaxons celebrate, then pass mike to AfD official. In #Saxony there is a problem! https://t.co/tzZ9gY37hC

We also reported on a fake ad campaign, also from Bautzen:

More than 100 advertisements from the "Oberlausitzer Kurier" (in the issue KW03/2022) of allegedly unvaccinated nurses, who should be unemployed because of the coming vaccination obligation, have turned out to be mostly fake (source).

It seems quite obvious that CDU deputy district administrator Witschas is chumming up with the right-wing extremist "Free Saxons" in order to make himself popular and thus secure his election as district administrator. This stunt was preceded by the fake campaign around unvaccinated caregivers, who were supposedly looking for new jobs in a Bautzen newspaper if mandatory vaccination were implemented. Which certainly led to stirring up parts of the local population.

The "Free Saxons" can sell their supporters a capitulating politician who buckles under "citizen protest", Witschas gets to collect votes from the local population. Washes here one hand, the other? In such a heated situation with opponents of vaccination and measures in the East, negligent and irresponsible.

But that’s not all that’s happening in Saxony this Demo Monday. In Coswig glass bottles are thrown at journalists. Police had not been present far and wide:

Through #Coswig march several hundred. No @PolizeiSachsen. It escalates immediately after the march begins. Press work is not possible. Punches and insults against @vuecritique, a bottle flies. #pressfreedom @DJVSaxony #Saxony pic.twitter.com/onBnTfc1HE

In #Coswig (ca. 400 TN) is reporting currently impossible.
After a few hundred meters glass bottles fly at us. Already before there were several times physical attacks against our escort. We have to break off.
Police was not seen far and wide.#dd2401 pic.twitter.com/xmKxsjxrMg

Freitals OB, who also never saw a right-wing extremism problem in his city, spoke today to the "walkers". Contentl. he did not take a position ("pass everything on to other authorities"), had understanding for everyone and invited to a dialogue on 8 October.2. a. Source: Jahrling/BI Saxony pic.twitter.com/ry3dRC5jPF

The situation seems to be increasingly taking on a life of its own.

Meanwhile, the Saxon government is trying to recapture Witschas action. Deputy Prime Minister Martin Dulig (SPD) said Tuesday after a cabinet meeting that the behavior of the deputy mayor had been unacceptable. One should not allow that there is a call to break the law (source):

"Mr. Witschas is lying to the people. ‘He lies to people by suggesting to them as if he can decide to apply a legal regulation or not,’ Dulig said. Witschas plays with acceptance and the confidence, which is so bitterly necessary straight in these times. "Therefore, we strongly condemn the behavior of Mr. Witschas."

Bautzen District Administrator Michael Harig (CDU) has been summoned by the state directorate on Tuesday. So Saxony’s government is scrambling to undo the damage done by Witschas.

The right-wing extremist "Free Saxony" has been pulling the strings in Saxony unhindered for weeks, sets the tone and the authorities look on almost inactively as the enemies of the constitution dance on the nose of the state.

This cannot and should not be allowed to continue.

Saxon Ministry of the Interior in the fight against right-wing extremism and #Mondaywalks symbol video.#le2401 #dd2401 pic.twitter.com/eUQkJIHIEa

Want more research and analysis on the background of political narratives and fake news? Then support our work with a small donation for a coffee, for this you can simply stop by here. Join our Telegram channel and never miss news from us again (link). Or visit our store and support us by buying t-shirts, mugs and bags this way.