If something breaks, you throw it away. Or? The volunteer tinkerers at the Repair Cafe in Hanover’s Nordstadt district see things differently and show guests how they can repair defective household appliances, consumer electronics and much more themselves. A workshop visit.

The Roselieb couple is standing in front of a workbench in their large workshop in Hanover’s Nordstadt district, looking at the monstrous appliance. The two of them have just heaved this huge built-in stove onto the massive wooden table. The silver-gray behemoth is ninety centimeters wide and can fit an oversized roast, a whole goose, or quite a bit of pizza. The appliance is practical, but unfortunately also broken.

At least, that’s what the manufacturer’s customer service department, which has been to the Roseliebs twice, said. And the spare parts are no longer available, after 14 years that’s just the way it is. The Roseliebs did not want to put up with it. So they drove to the Repair Cafe on this rainy November Saturday, with the oven in the trunk of their car.

The idea behind the Repair Cafe: over coffee and cake, volunteers help visitors repair the things they’ve brought with them. The offer in the rooms of the Stadt-Teil-Werkstatt in the northern part of the city, which belongs to the Werk-statt-Schule association, is free of charge. But the volunteers are happy to receive donations.

Volker Gorsky is one of these helpers, and he is an electrical expert. That the stove should really be off at the Roseliebs, he doesn’t really want to believe in that. Together they unscrew the metal cladding and do a test run. He finds the spare part that is supposedly no longer available in the manufacturer’s catalog. "And even if we can’t order it anymore: We’ll find a solution," says Gorsky, stroking his blue-collar suspenders. He smiles. The Roseliebs smile. Everything will be fine.

The workshop is a land of milk and honey for tool lovers. On the walls, on the workbenches and underneath, in metal cabinets: tools, measuring instruments, screws and probably almost everything you can buy in a specialized shop are everywhere.

Every workbench is being tackled

It’s a "can do" feeling that you can sense at many of the workbenches in the Repair Cafe. Very few people come here because they could not afford something new. The visitors are united by their unwillingness to accept that their household appliances or consumer electronics are broken, when everything was fine just a moment ago. On this Saturday, the three dozen or so visitors have carried all sorts of things into the workshop. Among them: Electric piano, headphones, coffee maker, kettle, TV, slide projector, pressure washer, sewing machine, computer and also a spade. At the reception table, which is a sheet metal cutting machine, they have filled out a form and then wait for one of the helpers to come and screw with them on what they have brought with them. Most of them go home that day with a repaired appliance.

If something is broken, then you can only win 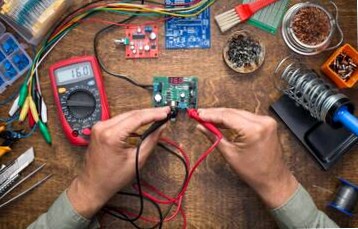 Before giving defective household and kitchen appliances, televisions, kettles and everything else a second chance, visitors to the Repair Cafe sign that what they bring is worth zero euros. "You can only win then," says organizer Velten Wilharm. But it’s also a safeguard in case something half-broken goes completely to pieces while trying to repair it.

Velten Wilharm is the initiator of the Stadt-Teil-Werkstatt, in whose rooms the Repair Cafe has opened on two Saturdays a month for the past three years. Wilharm is a supporter of the sharing economy. It is about sharing, for example, the rarely used tools. At the Stadt-Teil-Werkstatt, people can buy an annual pass for 45 euros and then use the workshop for six euros an hour from Wednesday to Friday in the afternoon, benefiting from the experience of the volunteers or even taking equipment home with them. Some of the equipment comes from Wilharm himself. It was not easy for him to give a large part of his equipment and tools to the Stadt-Teil-Werkstatt.

Helping people to help themselves, that’s the approach of this workshop. "Learning is my passion," says Wilharm. At 33, he found what he really enjoyed: an apprenticeship as a two-wheel mechanic. He renovated his sister’s house in Bremen, screwed bicycles on the side, earned his master’s degree and then his sewing machine master’s degree, and later taught the trade to ostensibly difficult young people. After a serious illness, he is an early retiree. Not everything works like it used to, but he runs the workshop with a lot of verve.

If you learn something and can then use it again, you always feel a bit of luck as well. That’s why the Repair Cafe is not only about repairing, but also about doing it yourself. "In our society, there is learned helplessness," says Wilharm. What sounds a bit unwieldy means: Many people surrender to consumption and lose the ability to act for themselves. At the Repair Cafe, he says, he always sees people who come with a small task and grow with each visit, gaining self-confidence that allows them to tackle problems in other areas of their lives as well.

Many things were better in the past, most of the hobbyists agree – at least as far as the quality of some products is concerned. Velten Wilharm doesn’t really believe that all things today are deliberately built to break quickly. It is rather the indirect consequence of the price pressure. Sometimes savings are made in the cent range on parts. When they break, the whole machine goes in the trash. "We are a nation of bargain hunters and don’t realize how we go from being hunters to being hunted in the process," says Wilharm.

But even repairing it is not always successful. One-third of the cases at the Repair Cafe, organizer Wilharm estimates, are unsalvageable. This is what Elsa Reiss has to experience on this Saturday. She brought a sewing machine from Phoenix to the Repair Cafe. The machine still sews, but the needle guide is a little off track. Sewing machine master Wilharm puts on his glasses with the clip-on magnifying glass, looks at the machine and says, "Well, when they break, it’s time to repair them."He could try it, open the machine – but maybe it won’t work afterwards. The lady ponders for a moment, but the risk is too great for her. She prefers to continue sewing and live with the small flaw. Next door, a colleague of Wilharm’s has just freed a headphone from a loose contact with a soldering iron. Two tables away, electrical expert Volker Gorsky passes judgment on a yellow high-pressure cleaner lying in pieces on the workbench. "Corrosion, that’s a total loss," he says. The owner nods. At least he tried.

On their way out, the volunteers behind the reception desk wish a visitor without a successful repair a happy weekend. "Until next time," says one of them, and then formulates something that would also be suitable as a motto for the Repair Cafe: "There is always something that breaks!"