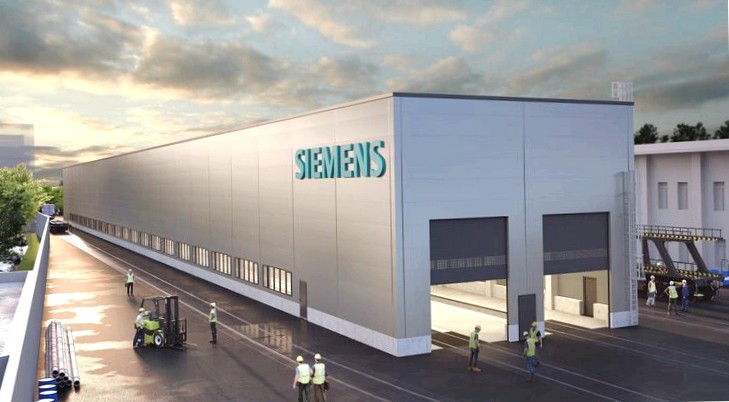 Siemens Mobility invests twelve million euros in further modernization of production site in Vienna-Simmering. Together with Vienna’s City Councillor for Economic Affairs Peter Hanke, the groundbreaking ceremony for the construction project took place on Monday, 1. March instead of. The focus of the investment is on the construction of a new train commissioning hall, the expansion of digitized production and the optimization of manufacturing processes. The aim is to further increase the site’s competitiveness and safeguard local jobs and domestic value creation.

The Siemens Mobility plant builds passenger coaches and metro trains, for example the new night trains for oBB or metro trains for Vienna, Munich, Riyadh or Bangkok. oBB’s Railjets were also manufactured here. At the Vienna plant, Siemens Mobility employs about 1.200 employees, manufactures about 450 rail vehicles per year and currently trains a total of 88 apprentices. Construction of the hall is expected to be completed in one year. The general contractor for the train in-service hall and the tracks is the construction company Leyrer+Graf.

Siemens Mobility is already using numerous innovative production technologies in Vienna. For example, Europe’s most robotic paint shop in the rail vehicle sector ensures that car bodies are painted to a high standard of quality while at the same time meeting environmental protection targets. Further investments are now being made in digital progress: The core is the construction of a new, technically state-of-the-art hall. In addition, two more robotic systems will be installed and the IT production network will be expanded. The groundbreaking ceremony for the new hall took place on 1. March 2021. Modifications are carried out during ongoing operation.

In order to improve the subway production possibilities for international metropolises, a functional hall with connection to the oBB network will be built. In the future, individual cars will be assembled into trains and tested statically before being transferred directly by rail to other locations for dynamic commissioning. Transport by rail avoids a significant number of truck journeys and helps minimize the CO2 footprint.

The machinery will be digitally networked in the future. This is made possible by a greatly expanded IT production network that will extend across the entire site. This facilitates the interaction between computer simulations and the actual production of the vehicles. In addition, this measure will increase the efficiency of production because machine statuses will be permanently monitored on the central server and breakdowns can be rectified at short notice via remote maintenance. In the course of the year an additional welding robot for the process of stem welding will be put into operation. Here a MIG welding process is used and thus the degree of automation is increased. The robots are programmed offline.

A friction stir welding system has been in operation since last year – according to Siemens, it is unique in the industry thanks to its size and technology. FSW or Friction Stir Welding is a friction stir welding process that also allows for very special vehicle designs. The existing modern paint shop will be supplemented by a sanding robot that will take over the sanding of the car bodies before painting fully automatically. Together, the two machines will take on tasks that were previously extremely physically demanding and relieve the skilled workers, whose job will increasingly be to control and monitor the machines.

The maintenance of rail vehicles at the Vienna Simmering site will be further optimized in the future by the construction of a second track yard. It will facilitate internal plant logistics by enabling vehicles to be moved more quickly from one work stand to the next. In addition, the connection to the public rail network is becoming more efficient. The maintenance hall will also be directly connected to the shop floor.