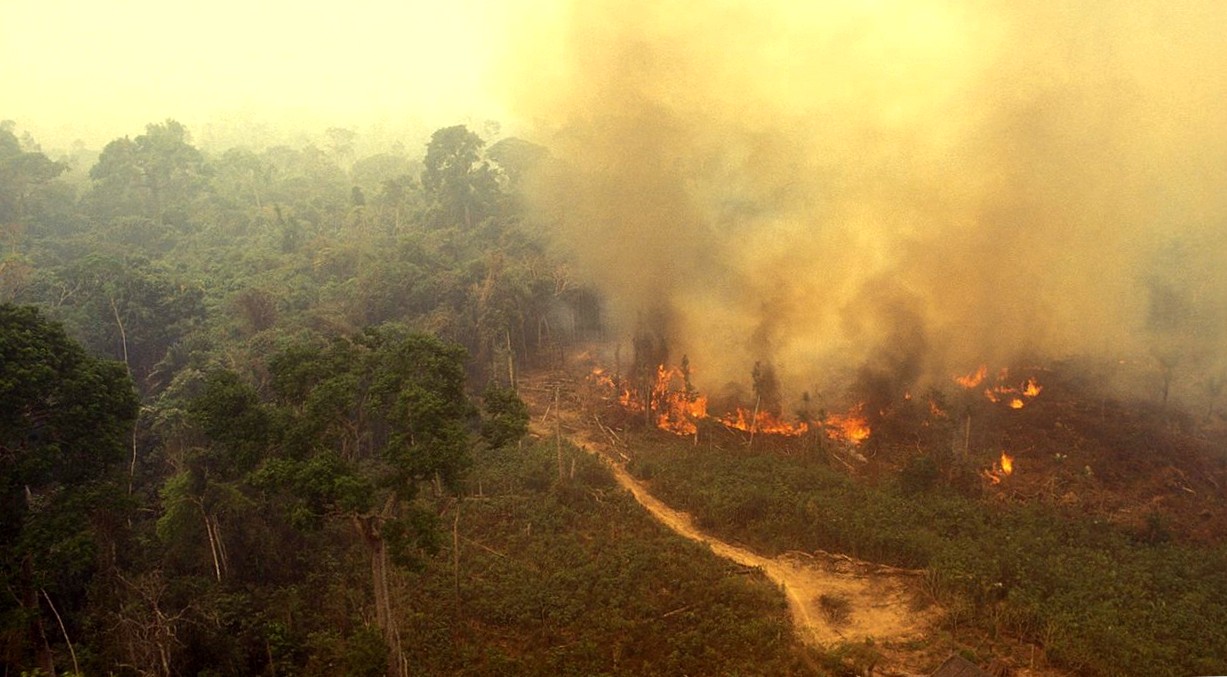 We’ll probably have to say goodbye to the Amazon rainforest soon. Because the current large-scale deforestation could turn the green lung of the earth in combination with global warming into a huge steppe. This process is accompanied by an immense loss of biodiversity, at the same time millions of tons of the greenhouse gas carbon dioxide (CO2) are released into the atmosphere.

Biologist Thomas Lovejoy from George Mason University and climate researcher Carlos Nobre from the Brazilian University of Sao Paulo warn of this in the journal "Science Advances".

The tipping point at which this development irreversibly begins has already been reached, according to Lovejoy and Notre. "The precious Amazon is on the brink of functional destruction," they proclaim. "Today we stand at a fateful moment: the tipping point is here, and it is now."

At tipping points, ecosystems of critical importance transition to a new state, so they tip over, as it were. This sets up positive feedbacks through which global warming amplifies itself. So far, scientists have identified 16 such tipping points, including the Amazon rainforest.

2019: Deforestation rate has doubled compared to the previous year

An analysis recently prepared for the U.S. House of Representatives by economist Monica de Bolle of the Peterson Institute in Washington gives details of the fatal change. The work is based on data from the Brazilian space research institute INPE.

According to this, in 2019 on Amazon should be 18.000 square kilometers of rainforest have disappeared as farmers, ranchers, and other land users set fire to large areas of land. This means the rate of deforestation has roughly doubled from the previous year.

2021: Tipping point could be passed

If its original area shrank by 20 to 25 percent, the Amazon rainforest would no longer be able to produce enough rainfall to sustain itself, writes de Bolle. This brings it dangerously close to a tipping point that could be passed in 2021.

Amazon rainforest produces its own rain

In fact, many rainforests produce their own rainfall. In the warm tropics, water evaporates rapidly after precipitation and rises as vapor with the wet that plants release through transpiration. A large tree thus releases up to 500 liters of water into the air per day. In the sky, it condenses into clouds that then rain down over the forest.

The Amazon rainforest produces around 50 percent of the precipitation that falls there in this way.

The following figures illustrate how close the Amazon is to the tipping point: Today, the region is 17 percent deforested, but in Brazil, the critical threshold of 20 percent has already been reached. If the annual dry season then lasts longer than four months, the forest will turn into savanna, according to Brazilian researcher Nobre. In some regions, this is already the case.

If the tipping point is passed, a spiral of decline begins. The rainfall in the region feeds the water cycle in the Amazon and supplies the water for the numerous rivers there. If they are missing, the entire region is in danger of dying out. The largest forest on our planet, home to one-fifth of all animal and plant species, would then be permanently and irretrievably lost.

Since 1980s: rainfall decreased by 25 percent

Apparently, this process has already begun. A large-scale study by 100 biologists on the impact of global warming on vegetation in the Amazon found that rainfall in the south of the region has fallen by 25 percent since the late 1980s.

It also experienced three extreme droughts in 2005, 2010 and 2015/2016. "The ecosystem response is not keeping pace with climate change," states study leader Adriane Muelbert of the UK’s University of Leeds.

"The data show that there are fewer and fewer trees dependent on moisture in the areas studied. However, the trees adapted to drought do not manage to fill these gaps."

This development threatens to lead to a fatal feedback loop. Since pre-industrial times, the Earth has warmed by one degree Celsius. In Brazil, however, the average temperature rose by 1.5 degrees, and in the southern Amazon by as much as three degrees. Forest decline is now accelerating warming.

The entire human race is affected. Because its trees store 60 to 80 billion tons of CO2. "The Amazon is considered the green lung of the world, but that’s wrong," notes U.S. researcher de Bolle. "It does store carbon, but that doesn’t combat climate change."

Instead, it would be more of a "carbon bomb". If the trees are burned, as is currently done on a large scale, up to 200 million tons of carbon are released into the atmosphere each year, equivalent to 734 million tons of CO2.

Targets of the Paris climate agreement are almost impossible to meet

The targets agreed in the Paris climate agreement of 2915 would thus not be met. In it, the parties to the treaty pledged to take action against global warming so that it does not exceed two degrees Celsius and, if possible, even stays below 1.5 degrees.

Only 500 million tons of CO2 should be released into the atmosphere, but at today’s emissions, this budget would be exhausted in just twelve years.

Amazon basin a source of wealth

In her analysis, de Bolle names the cause of the misery: Underlying it is "a long-standing failure of Brazilian government policy," culminating recently in the current government’s deliberate weakening of the institutions and agencies responsible for protecting the forest.

This development has a name: Brazil’s ultra-right president Jair Bolsonaro. He sees the Amazon basin primarily as a gigantic source of wealth, for example through the operation of mines in which metals are extracted, but also gold. There are an estimated 2400 tons of the precious metal under the trees, representing more than 4.4 percent of the world’s known reserves.

Roads, airstrips as well as ports are being built to develop the mineral resources, and Bolsonaro’s government reduced the size of 60 protected areas for this purpose to enable their exploitation.

Yet large-scale clearing is likely to do tremendous long-term harm to Brazil’s economy. Because as rainfall declines, soil fertility falls and with it agricultural yields.

On the other hand, it would be worthwhile to preserve the forest. In a 2018 study, U.S. researchers said an intact forest could provide goods such as nuts and rubber. Because the water cycle would be preserved, agriculture and livestock breeding would continue to be possible, as would the use of hydropower.

This would yield a profit of eight billion dollars per year compared to a destroyed forest.

Researchers still believe the Amazon can be saved

The international attention the forest flaring attracted this year in particular offers an opportunity to do so, de Bolle argues. It could help Brazil, like the U.S., stop denying climate change and work together to develop ways to preserve and sustainably use the forest.

Researchers Lovejoy and Nobre also believe the forest can still be saved. This would require the rapid reforestation of abandoned pastures and croplands, which account for 23 percent of deforested areas. "We are scientists who studied the Amazon and its wonderful treasures for decades," they write.

"The peoples and leaders of the Amazon states have the power to prevent a global environmental disaster. We need the will and imagination to change direction in favor of a sustainable Amazon."