That sounds quite bold, if I simply state it like that. However, in the last few weeks I have realized that neither I nor the rest of my study environment have ever really used the mind-map method in the last five years.

Why this is so and how you can use mind maps correctly and effectively, you will learn in today’s article.

The Mind-Map Method – The Experiment

A few months ago, during my speed-reading experiment, I once again stumbled across mind maps. A method that I have actually been familiar with for years and that I also use regularly. But so far I had not really dealt with the mind-map method. Rather I used picked up half-knowledge for the conception of my own Mind-Maps.

That was probably also the decisive reason why first attempts with mind maps during my bachelor studies failed grandiosely. I was able to construct bombastic trees, flooded with information and branching out a hundred times, but I learned very little with mind maps. As a rule, the mind maps were not even legible on DIN A0 and the flood of information simply overwhelmed and demotivated me, instead of having the opposite effect.

I did not want to leave it at this experience. I gave the mind-map method a second chance and studied for my last exam in my master’s program exclusively with mind-maps.

The basic idea of mind maps

According to Tony Buzan, the inventor of the mind-map method, about 95 percent of the literate population suffers from a kind of "sleeping sickness" because they make notes and records in a way that is deadly boring and puts the brain in a kind of stupor. 1

The reason: Notes and records are usually made in a linear fashion and in 95 percent of the cases in a single color. It is monotonous and bores our brain!

The far worse thing about it: this way of "learning" uses considerably less than half of our cortical (concerning the cortex) abilities, which results in most of our mental potential remaining unused. For example, traditional note-taking does away entirely with visuals, colors, images, visualization, or associations.

But these are integral parts of our thinking process. It is a fact that we humans think in pictures and associations and not – as assumed for centuries – in words. 2

Here a participant of the experiment was given up to 10.000 images shown. Two days later, a memory test was conducted in which the participant was shown two photos and had to decide which of the two pictures he had already seen. The recognition rate was 99.6 percent on average. 3

This finding from brain research clearly shows that we can only exploit our mental potential if we address a large part of our cortical abilities. Images realize this, for example, through the use of color, shape, line, multidimensionality, visual rhythm, and imagination.

This is where the mind-map method comes in. Instead of presenting information in a boring, linear way, mind maps adapt to our radial thinking pattern and make it easier and, above all, more efficient to process information.

Now, when we grasp a thought or memory, a biochemical electromagnetic pathway is established between the individual neurons. This means that the thought process does not run linearly due to these physical conditions, but radially (radiating from a center point).

An alternative name for this biochemical electromagnetic pathway is "memory trace". The more often this track is "walked", the better we can remember something. You can compare this roughly with clearing a path:

The first time it’s a struggle because you have to clear a path through the undergrowth. The second time you take this path, thanks to the clearing of the first time, it already becomes easier. The more often you walk this path, the less resistance you encounter until, after many repetitions, you find a broad path that requires little or no clearing. 5

This is ultimately also the decisive reason why repeating information and facts is so important for the learning process.

The basic rules of the mind-map

Before we start with the basic rules of a mind map, here is a short definition of what mind maps actually are:

The mind map is a graphic expression of radial thinking, because the human brain thinks and invents radially. Mind maps capture and represent this radial thinking. This is how they paint an external picture of what is going on inside us. 6

Elements of a mind map

At its core, a mind map consists of the following elements:

Beside the mentioned elements of a Mind-Map Buzan describes in The Mind-Map Book the following laws and recommendations, which make sure that the Mind-Map Technique reaches its full potential.

Emphasis is the first important function of a mind map to enhance both memory and creativity. This can be achieved by the following techniques:

Associations are the second main factor for the efficiency of mind-maps besides emphasis. Here are a few elements that helped:

In the end, however, both emphasis and association are of no use if the mind map becomes unreadable or overwhelms and demotivates you due to its information density. So Buzan still suggests considering the following rules of clarity:

My experience with (fake) mind maps

If I now look at my mind maps of the last years considering the above rules, I can state one thing:

I have never created a real mind map!

Even during my complete study career I have never seen a real mind-map that takes into account all the above laws and makes real use of emphasis besides associations.

What happened? An attempt at retrospective using my mind-map for an exam preparation from 2014 as an example:

The most obvious mistake I consistently made was my desperate attempt to pack all the information into a single mind-map. As a result, this always led to unbelievably large and confusing mind maps, which literally beat me to death due to their information content.

If you look at the example above, you will quickly understand why this monster construct had no ambitions whatsoever to support me in my exam preparation.

The solution to the problem: a master mind map for the entire course with associated references to the stand-alone mind map(s) for each lecture.

Another mistake, which can also be seen in the above mind-map, is the permanent violation of the "only one word per branch" rule. In many cases, the individual branches have whole or even several sentences on them.

Although I’m now of the opinion that whole sentences have no place in mind maps (except maybe for mind maps for subjects where definitions have to be learned by heart), I definitely find the one-word-per-branch rule too strict.

For me personally, I have relaxed this rule a bit: I try to write as few words as possible on a branch, but don’t force myself to reduce my thoughts to one word.

What was completely missing in my earlier mind maps were accentuations. Just exactly one of the main functions that make mind maps so valuable and useful for learning.

Basically, I didn’t emphasize anything at all in my mind-maps, but just abused the method as a loose collection of association of concepts. The stimulation of my cortical abilities by the mind-maps was correspondingly low.

After I had identified the above mistakes, this time everything should be better. I wanted to learn from my mistakes and give the mind-map method another chance for my last exam in my master studies.

The chosen lecture was titled "Electronic Publishing" and seemed to be very suitable for my experiment because of its structure. Because although the individual chapters were self-contained, there were numerous cross-references and connections between the chapters that were very easy to identify and understand in mind maps.

I proceeded as follows: I worked my way through the slides of the respective lecture, creating simultaneously one mind-map for each main topic. Depending on the lecture, there was either one main topic or several topics. 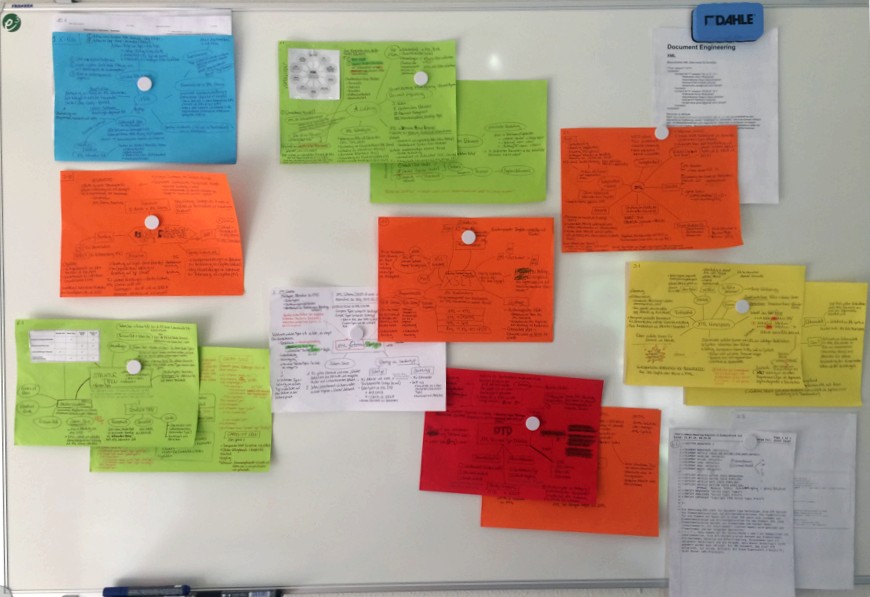 What I had to realize quickly after the first lectures: The biggest challenge for me in creating the mind maps was Time factor. Because "painting" mind-maps (if you do it by hand like I do) takes significantly more time than making a traditional summary via copy&paste (linear recording).

This time investment should pay off quickly, because compared to my learning method with summaries I could gain many advantages from the mind maps:

Just as positively the examination achievement turned out at the end and I was allowed to rank among the best 5 percent of the course, which was measured by the invested workload (altogether 25 hours for a 5 ECTS subject) for me a full success&

At this point, one more thing should be mentioned: The objective of learning. For example, do you want to pass the exam only with a good grade or do you want to retain the material as long as possible?? If the latter is as important for you, then a repetition of the made mind maps is inevitable and the necessary time expenditure increases accordingly. My personal goal in this specific case was only to achieve a very good grade with as little time as possible.

Somewhat negatively resp. getting used to working with mind maps were actually only my stays in the library: Somehow people found it quite interesting to see me messing around with colored sheets and crayons. At the latest when I started drawing, I had the full attention of my learning partners surrounding me&

Besides the mentioned lecture, I had initially shortlisted another one, but after a few days I realized that not every lecture format is equally suitable for the mind-map method. For example, the second lecture was in a format that involved a lot of memorization, which would have been reflected in the mind map in whole and full sentences. I therefore decided to create only one master-mind-map for this second lecture (for the overall context of the material) and to continue learning the rest as a classic summary.

In addition to preparing for exams, mind maps have proven to be irreplaceable for me in the last few weeks, especially for coping with a large flood of information.

Because what I often saw in the past with fellow students and friends was the following: Before you get started with your bachelor’s or master’s thesis, you first review the relevant literature and (ideally) make notes and recordings about it. The latter then end up somewhere on a sheet of paper, in a Word file or as a citation directly in a citation program.

Mind maps can also help here. For example, I created a mind map for every book and every scientific paper I wrote for my master thesis in order to be able to access the most important facts quickly. to grasp at a glance what the particular paper is about.

With the help of this approach I could already save a lot of time in the last weeks, because I didn’t have to read papers twice anymore (which I did in the past) and when searching for special citation sources I can quickly reach my goal via the mind maps.

In addition, mind maps can serve as an ideal support for structuring one’s own work by recording the content and already known sub-points and arguments in one’s own mind map.

To use the full potential of mind-maps, you need to address as wide a range of your cortical abilities as possible. This is best done by creatively enriching your mind-map with images, multi-dimensionality and colors.

It’s best to try your hand at an example right now:

The mind-map method is a very powerful tool to address all your cortical abilities and thereby significantly increase memory and recall of a topic. To achieve this goal, your mind-map should have many visual elements such as images, three-dimensionality and colors. The more creative you are the better!