The pyramids of Giza 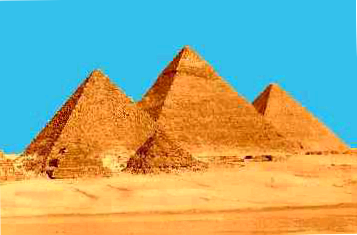 The landmarks of Egypt lie gigantic before the gates of Cairo and they are "built" by single-celled organisms: The pyramids of Giza. They were found at the time of the 4. Dynasty built by the kings Cheops, Chefren and Mykerinos (2590 – 2470 b. Chr.) and are the oldest and only almost completely preserved of the "seven wonders of the world, and next to the Great Wall of China, the largest structure ever created by human hands. The Cheops pyramid alone, with a height of 146.6 meters, is taller than a 50-story skyscraper and occupies a floor area of 53000 square meters, or nine soccer fields.

More than 6.5 million tons of limestone have been worked into them. The Cheops pyramid is thus 35 times heavier than Cologne Cathedral. Beside the three big pyramids, the Cheops-, the Chefren- and the Mykerinos-pyramid, there are seven smaller, so called queen pyramids in direct neighborhood. In terms of construction technology and work organization, however, the construction of the pyramids raises many questions to this day.

More than 7 million limestone blocks with an average weight of 2.5 tons are built into the three large pyramids. In addition, the bright white limestone slabs with which the pyramids were originally clad. This white cladding was used as a quarry in the Middle Ages and was used for building houses in Cairo. Only at the top of the pyramid of Cheops remains of this cladding can be found. Inside, the burial chambers of the Egyptian pharaohs were covered with red granite and weighted down with granite blocks weighing up to 60 tons.

The limestone blocks that form the core and thus the mass of the building blocks mostly come from the immediate vicinity of the pyramids. These are fossil-rich calcareous sediments that were formed during the Eocene (Lutet) period ca. 45 million years in the sea of the Tethys have deposited. The nearby Nile later burrowed deeply into these sedimentary layers, exposing the limestone beds of these marine deposits. Exactly here the builders of the pharaohs have laid out their quarries for the pyramids.

Fig. 2: The fossilized shells of Nummulites gizehensis are found particularly frequently in the pyramid rocks and were worked on scientifically for the first time 1775 by Forskål. These unicellular organisms belong to the group of foraminifera and can reach a size of up to 10 cm.

Fossil and rock analyses prove beyond doubt that the white, calcareous facing slabs of the three great pyramids of Tura originate from a quarry field directly opposite the pyramids on the eastern bank of the Nile (Mokattam strata, Lutet/Eocene). The limestones that form the core mass of the three great pyramids were quarried only a few hundred meters south of the pyramid field. Additional limestone blocks for the construction of the pyramid of Chefren have been quarried from the quarry area near Maasara and transported across the Nile to Giza (ca. 15 km). Several large gallery quarries, 100 meters or more into the mountain, have been made here.

Fig. 3. Limestone blocks of the Cheops pyramid of Giza.

Stratigraphically, the Tura and Maasara limestones of the "Observatory Formation", from the pyramid field but from the "Cairo Formation" assigned to. Both formations belong to the Mokattam group and have an age of approx. 43-48 million years ago (Lutet/Eocene). More sandy limestones for the core of the Giza and Chefren pyramids were brought from the Hitan el-Hurab quarry. These belong to the Kom el-Shelul Formation and are ca. 2.5 million years old (Pliocene). Upper Oligocene basalts from Abu Roash (near Giza) were eventually used as floor pavement in the pyramid area. The granites of the burial caves have the longest transport route behind them and were ca. 600 km south near Aswan mined.

Fig. 4. Quarry on the pyramid plateau of Giza. In the background the Chefren pyramid. Burial chambers were later built into the former quarry walls (modified after Klemm and Klemm, 1993).

The real "builders of the pyramids.

A close examination of the calcareous pyramid rocks shows that lenticular and coin-shaped fossils occur en masse in them. These are the fossilized shells of single-celled organisms, so-called foraminifera, which can reach a size of up to 10 cm. These foraminifera were the most frequent inhabitants of the Eocene shallow seas, from which large parts of the sedimentary rocks of the Mokattam Mountains near Giza are built up. Because of their coin-shaped form and their mass occurrence they have been called Nummulites (= coin stones) since ancient times. It is estimated today that the mass fossilized shells of these foraminifera make up 60 percent or more of the individual pyramid rocks of Giza. The unicellular foraminifera are thus the "true builders" of the pyramids.

Fig. 5 a, b. Nummulite limestone of the Eocene of Giza (Mokattam stage) and thin section drawing of the micro- and macrosphere of Nummulites gizehensis (after Schaub 1981).

The oldest description of the fossil foraminifera of Giza is almost 2500 years old and comes from the Greek historian Herodotus, who described Egypt in the 5. Century v.Chr. traveled. However, Herodotus and others (Strabo, Pliny the Elder) were convinced that the fossilized lentils and coins were not fossils but legumes (lentils), i.e., the food remains of the pyramid workers.