In the 1980s, she fought for years to get her daughters out of the GDR. Jutta Fleck’s case became a German-German political issue.

Jutta Fleck is a lively, cheerful woman. The 72-year-old from Wiesbaden approaches people with a smile. When she tells her story, however, she becomes quite matter-of-fact and also thoughtful in the meantime.

Failed escape, women’s prison, humiliation, child deprivation, betrayal and the relentless fight for her two daughters in a divided Germany: almost 30 years after the fall of the Wall, her life is still a symbol of resistance to the dictatorship in the GDR. Jutta Fleck is the "Woman from Checkpoint Charlie," who for years fought worldwide with protests to the point of exhaustion to secure the departure of her then underage daughters.

Today, she and her younger daughter Beate Gallus talk about their terrible experiences in the 1980s – in schools in front of young people who only knew about the division of Germany, the Wall, the system of spying and fear from lessons or books.

Fleck has been head of the project "Political-Historical Reappraisal of the SED Dictatorship" at the Hessian State Agency for Civic Education for ten years. According to director Alexander Jehn, she will be leaving the Landeszentrale in the coming year.

Together with her 46-year-old daughter, the 72-year-old also wants to tell her story to schoolchildren in the future, as she did recently at the Graf-Stauffenberg-Gymnasium in Florsheim. They hope for private financiers.

The story of the two women, whom the unjust regime hit with full force, is one of humiliation, arrest, dehumanization and disenfranchisement. What they wanted then was freedom, and preserving it is still their leitmotif today.

"You just want to get out. And that’s how it went for me," Jutta Fleck says about her motivation to flee the GDR. Divorced from her husband, a supporter of the regime who was loyal to the line, she and her daughters decided to flee via Romania in 1982. Only her uncle in the West is privy to the plans.

But the elaborate plan to reach the other side of the Iron Curtain with West German passports via Yugoslavia goes wrong. Monitored by the notorious Romanian secret police Securitate, the three were finally arrested in Bucharest and handed over to the GDR’s state security.

"They literally snatched us away from our mother."

"We ask you to come with us, to clarify a matter of fact."With this sentence the escape had failed. "Then you’re arrested," says Fleck. At that moment the ordeal began. Their plans were betrayed by an unofficial employee of the Stasi in West Germany.

During a short stay at the airport in Bucharest, Fleck managed to tell a stewardess, who reacted very quickly, that she should call her uncle in the West and inform the authorities responsible for German-German relations. Otherwise, the West German authorities might never have learned about their fate.

The three were brought back to the GDR in an airplane, but they were already physically separated there. "Suddenly everything was different," says Beate Gallus. "They literally snatched us away from our mother."There was this coldness of feeling and she and her sister had so many questions. Where will we go, what will happen to mom and what will happen next, was on their minds.

"You have no questions to ask," said the warden. "My sister and I held hands all the time." In the GDR there was no goodbye. "We could no longer hug our mother." There was only one more brief glimpse through a porthole. "It was a deadly sad moment," Gallus recalls. With one look, they would have signaled to their mother: "We’re standing by you."

Jutta Fleck was sentenced to three years in prison for Republikflucht and was sent to the notorious women’s prison Burg Hoheneck in the Erzgebirge mountains. Prisoners were imprisoned there under inhumane conditions. In the completely overcrowded cells, political prisoners sat together with violent criminals. 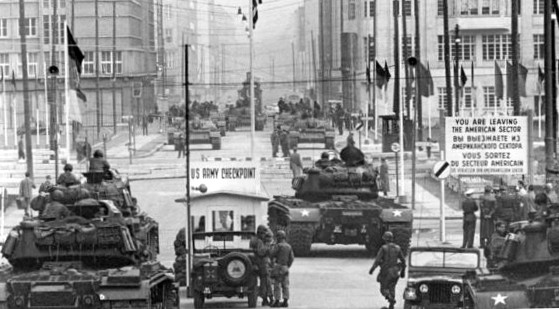 Fleck spent about two years in the prison, then she was bought out by the West via the Federal Ministry for Inner-German Relations. Her daughters remain in the GDR. She is considered an enemy of the state. The now 72-year-old begins her fight for her children. At the Checkpoint Charlie border crossing, she stands almost eyeball to eyeball with the GDR border guards, holding placards like "Give me back my children".

She was considered an enemy of the state

Again and again the courageous woman comes to the public, also with the help of the International Organization for Human Rights. She demonstrates not only in front of the border crossing in the heart of Berlin, but also abroad. In July 1985, she chains herself outside the Conference on Security and Cooperation in Europe (CSCE) in Helsinki and demands a meeting with Foreign Minister Hans-Dietrich Genscher (FDP), whom she eventually meets.

Before a visit of the GDR head of state Erich Honecker to Pope John Paul II. In April 1985, the head of the Catholic Church grants her a brief audience. "I know about it. I pray for them and I will tell Honecker," she recalls today. A commemorative event for the 25th anniversary. She uses the 50th anniversary of the building of the Wall for a protest and, as she recounts, is finally complemented from the stage by the then Chancellor Helmut Kohl (CDU). Her case becomes a political issue between the two German states.

Several times she is offered the prospect of her two daughters leaving the country, but time and again the reunification of the family is delayed. Her only contact with the two girls are letters, tapes and pictures of the teenagers living more or less under arrest in the GDR.

"They ignored us as human beings," Beate Gallus recounts of the six years of separation. "We have always communicated, we want to go to our mother."At first, the two girls are taken to a children’s home, where the identification was not the name, but a number. There was no freedom whatsoever, even the washrooms and toilets were open. It was an atmosphere of command, deprivation of love and coldness of feeling. In the home one had not been allowed to move freely.

"I couldn’t just go to my sister."They had been in the home for only half a year. "But every second there is robbed from your life," Gallus says.

Suddenly her father was standing in front of them. "What we didn’t know was that he was sent from above," Gallus recounts. They would have learned this only in 2008 by the insight into the Stasi files. He had believed in the system. "At home we were locked up. We were not allowed to make contact." In the East, she says, they were the daughters of an enemy of the state. In the home and at school, they were told over and over again, "Your mother betrayed the country. They had been lied to that their mother did not want them anymore. "Even our own father, who locked us up, did not have the right to say, "Your mother doesn’t love you anymore"".

On 25. August 1988, six years after the separation and a good year before the fall of the Wall, the "woman from Checkpoint Charlie" can once again embrace her daughters Claudia and Beate in West Berlin. Until the end, she was afraid that something would come up again, says Fleck. But this time it works. "I could then also cry," says Fleck.

GDR history With the head through the wall 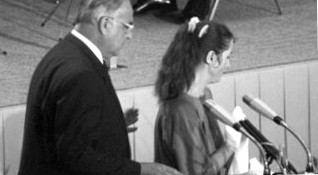 Jutta Fleck first lived in Bavaria after her release and remarried. Today she lives in Wiesbaden with her husband, as does her daughter Beate, who works as an artist. "It’s like I only started living after that," her daughter Claudia recalled earlier while filming for a documentary. She now lives in Munich. There was radio silence between the two girls and their father for more than 20 years. Today they would have contact again, says Beate Gallus. "But time is not spoken about." (dpa)