The study in Science:

"New Horizons has for the first time accurately determined the diameter of the ice dwarf: Pluto measures 2, according to the report.374 kilometers. The spacecraft was unable to detect a flattening like that of the Earth due to its own rotation – the dwarf planet is spherical.

Pluto’s surface is dominated by ice. "New Horizons" but has also photographed mountains that extend into 3.000 meters altitude. The nitrogen, carbon monoxide and methane ice that had been detected on the dwarf planet before the spacecraft’s visit is much too soft for such high mountains. The researchers led by Alan Stern of the Southwest Research Institute in Boulder therefore assume that these types of ice form only a relatively thin layer on the surface in many places and that the much harder water ice piles up into mountains underneath them. Pluto’s mountains, which can easily compete with the Rocky Mountains in North America, consist of icebergs.

Surprisingly, there are relatively few impact craters on Pluto, compared to the expected cosmic bombardment in the ice dwarf’s home, the Kuiper belt. The craters must have disappeared through active geological processes, astronomers conclude. This means, for example, that the completely craterless ice plain Sputnik Planum is only about 100.000 years old – that’s very young compared to the solar system’s age of 4.5 billion years. It is unclear which energy source drives the geological activity.

In the Sputnik Planum ice plain, the spacecraft spotted evidence of a type of glacier. The ice seems to have been in motion or still to flow there. Images show how the ice layers have flowed around obstacles.

Dwarf planet with many colors

The researchers were also amazed by the variety of colors of the ice dwarf. Besides almost completely white ice plains, there are reddish and slightly bluish landscapes on Pluto. The reds probably come from carbon compounds called tholins, which form from the nitrogen-methane mix on Pluto with the help of ultraviolet radiation or bombardment by fast cosmic particles, and provide yellow to dark red hues even at low concentrations.

Pluto’s atmosphere is thinner than expected. The air pressure on the ground is about 10 millionths of a bar, which is only one hundred thousandth of Earth’s air pressure. It is unclear whether the atmosphere has only recently thinned out. New Horizons" photographed in the atmosphere Veils of haze whose origin is not yet clear. 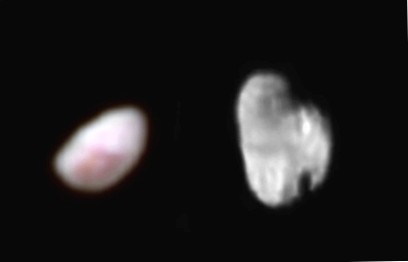 The moon Charon, with a mean diameter of 1.212 kilometers also offers astonishingly varied landscapes. Among other things it has a gigantic, kilometer-deep trench system, which is at least four times as long as the Grand Canyon on Earth. The canyons stretch across Charon’s surface. Some researchers speculate that a subterranean ocean may have frozen on the moon a long time ago, causing the entire crust to burst open due to the change in volume. Charon seems to be similarly geologically active as Pluto, but the energy source of this activity is unclear as well.

"New Horizons" has also studied the plutonian moons Hydra and Nix. Hydra is about 40 by 30 kilometers, Nix about 50 by 30 kilometers. Both mini-moons are surprisingly reflective. Astronomers therefore assume that Nix and Hydra are covered with cleaner water ice than Charon. How the two pluto rabbits could retain such unblemished surfaces over billions of years, given the numerous environmental influences in the Kuiper belt, is currently a mystery.