Vacation time is relaxation time and so that you can not only relax on the beach and go on a sightseeing tour, but also keep the stress factor as low as possible during your journey to and from Greece, we have put together 11 fascinating Greek islands with an airport for you, which you can reach by direct flight without any stopovers and annoying transfers! Good travel!

The first Greek island on our list is Kefalonia, west of the Greek mainland. The Ionian island has its own airport in Argostoli, which is quickly accessible from all its cities, and can be reached from Germany in under three hours without a stopover. The island is not only easy to reach, but also offers a lot to see and marvel at, from its wonderful beaches and other natural wonders, such as the impressive Melissani Cave, to archaeological and historical sites and museums worth visiting, such as the Castle of Assos or the Holy Monastery of Agios Gerasimos, to more modern attractions such as the public library of Argostoli. In short, you won’t be bored during your visit to Kefalonia – and if you’re looking for adventures away from the island, you can consider ferry trips to the Greek mainland, the neighboring Ionian Islands or even Brindisi in Italy.

What else there is to see besides an airport on Kefalonia, you can find out here: 10 things you must do on the Greek island of Kefalonia!

We stay with the Ionian Islands and go to one of the most famous vacation islands in Greece: the beautiful island of Corfu in the north of the Ionian Sea. Like most Greek islands, Corfu has plenty of beautiful beaches where you can spend unforgettable hours sunbathing, doing water sports and splashing around in the refreshing water, but also away from the coasts there is a lot to discover: from the Old Fortress in Corfu Town to the Achilleion Palace, built in the 19th century. From the beautiful castle built in the XVII century for the Austrian Empress Elisabeth of Bavaria, to the impressive natural sites of the island’s inland, such as Mount Pantokrator, which is perfect for hikes and excursions in the countryside. Corfu airport is located directly in Corfu town, but can be reached quickly from anywhere on the Greek island, and the Greek mainland is only a stone’s throw away from Corfu.

Not all of the Greek islands worth visiting can be reached by direct flight. Here it goes to our Insider tip Greece: 15 unknown Greek islands!

From the Ionian Sea we head to the southern Aegean Sea, to one of the most historically interesting islands Greece has to offer: the Hippocrates Island of Kos. Kos is one of the Dodecanese islands and is the perfect place to enjoy Greece’s rich history as much as its natural beauty. The island thus offers both gorgeous beaches galore, as well as plenty of exciting sights to marvel at. In Kos town you will find the Neratzia Castle directly in the harbor, the ancient plane tree of Hippocrates and various excavations of Roman-Greek ruins, while the rest of the island has sites such as the Asklepion, the fortress Antimachia or the gardens of Hippocrates. And if you want to spend a quiet afternoon with a beautiful view and Kos’ best drink, the cinnamon syrup Kanelada, take a trip to the quiet village of Zia, while ferries will take you to exciting trip destinations like the volcanic island of Nisyros, Rhodes or Bodrum in Turkey.

You would like to know more about what you can do and discover on this great island?? Then read on right here: Top 10 things to do and see in Kos 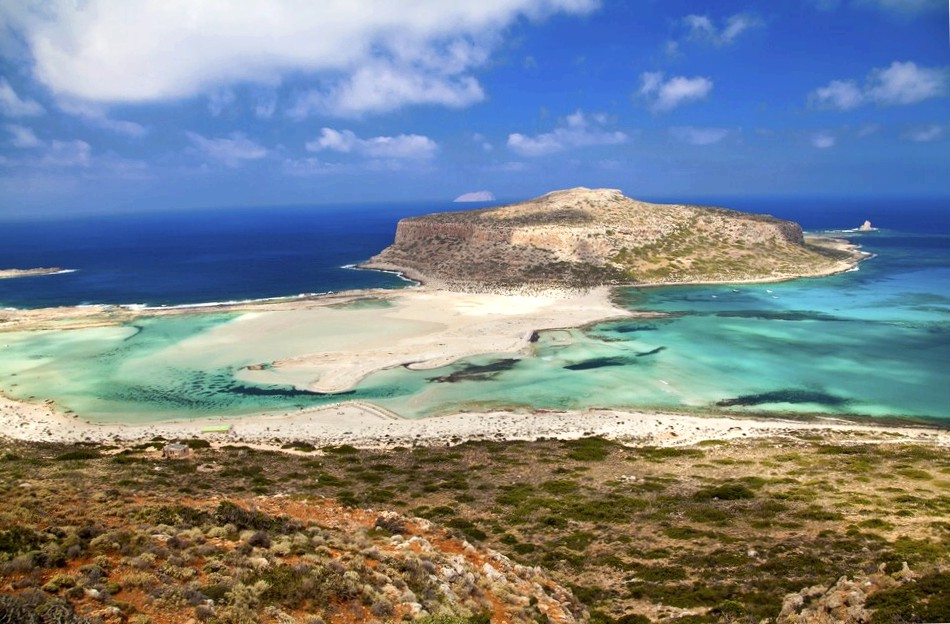 Even further south in the Aegean Sea than Kos there is another Greek island, which can be reached from Germany by direct flight and is also the largest island of the country: Crete. There are two airports on Crete, both of which you can fly to without a stopover: Crete Chania Airport in the northwest of the island and Crete Heraklion Airport, which is located about halay west-east of the island, also on the north coast. Crete offers a variety of different areas that are well worth a visit, from the pink beaches of Elafonisi in the northwest to the gorge of Richtis in the east of the island. In between there are countless wonderful stretches of coastline, impressive historical sights such as the Arkadi Monastery, the ruins of Knossos or the Venetian fort on the small island of Spinalonga off the coast of Crete. In Chania you can also admire the Venetian harbor or visit one of the many interesting museums.

A beach vacation on Crete sounds like your absolute dream vacation? Then check out the best beaches of the island in advance! Here it goes the 10 most beautiful beaches in Crete! 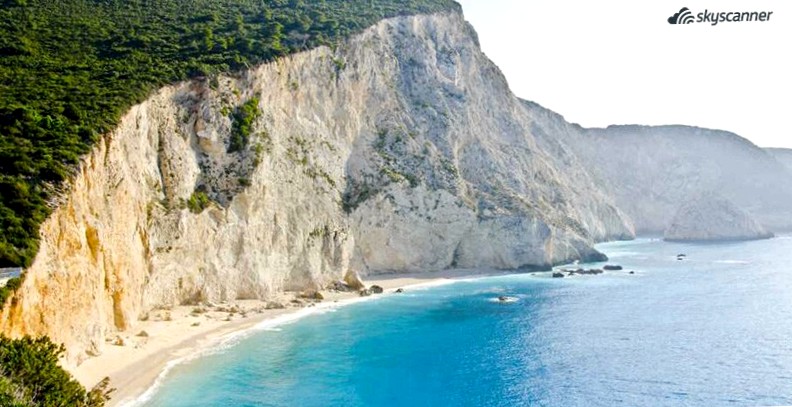 Back in the Ionian Sea, the next beautiful island on our list of Greek islands that you can reach by direct flight is Lefkada, which is just a few hundred meters west of the Greek mainland and is connected to it by a highway bridge. The island has its own airport, but it is not located directly on the island, but in Preveza, ca. 20 km or 25 minutes by car. Lefkada is especially known for its fantastic coasts – from dreamlike beaches to impressive cliff landscapes. Along these coasts, you’ll also find a number of cute little villages, as well as plenty of opportunities for water sports or beach adventures. Excursions are possible to the nearby islands of Corfu or Kefalonia as well as to various destinations on the mainland, for example to Preveza itself. 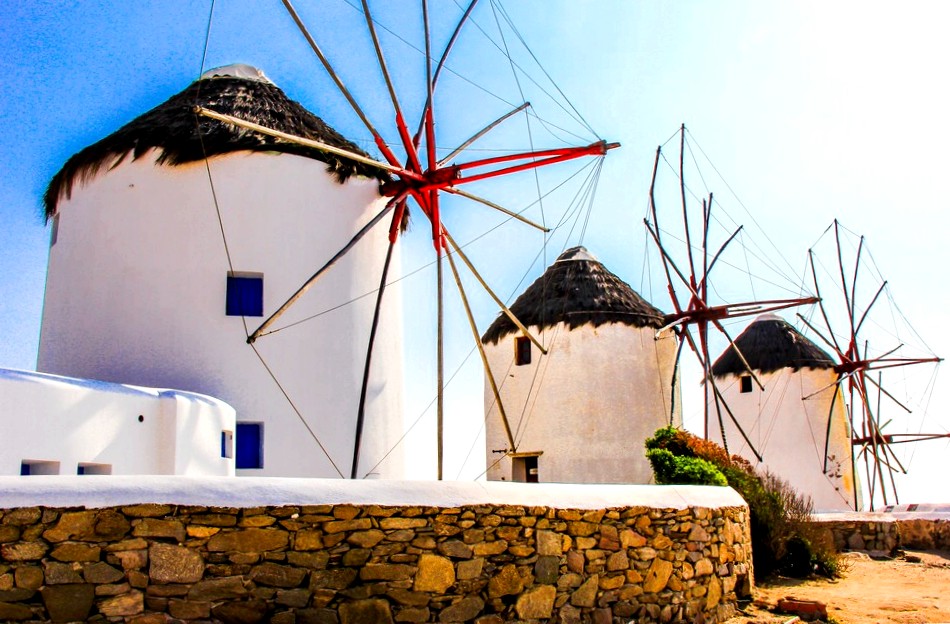 If you are interested in Greek history and mythology, you have surely heard a lot about Mykonos, and you can also fly to this Greek island from Germany in less than three hours by direct flight. Away from battles between gods and titans, the Cycladic island of Mykonos is known today for one thing above all: Its unique beach atmosphere and exciting nightlife. If you want to do some sightseeing, you can visit places like the Armenisti lighthouse or the monastery of Panagia Tourliani, visit the beautiful old town and the various exciting museums in Mykonos town (often simply called Chora) or go by boat to the small neighboring islands to see sites like the ruins of Delos and Cynthos.

Would you like to get some inspiration for excursions and sightseeing tours before your departure?? No problem, you can find them here: 10 must-do things to do in Mykonos 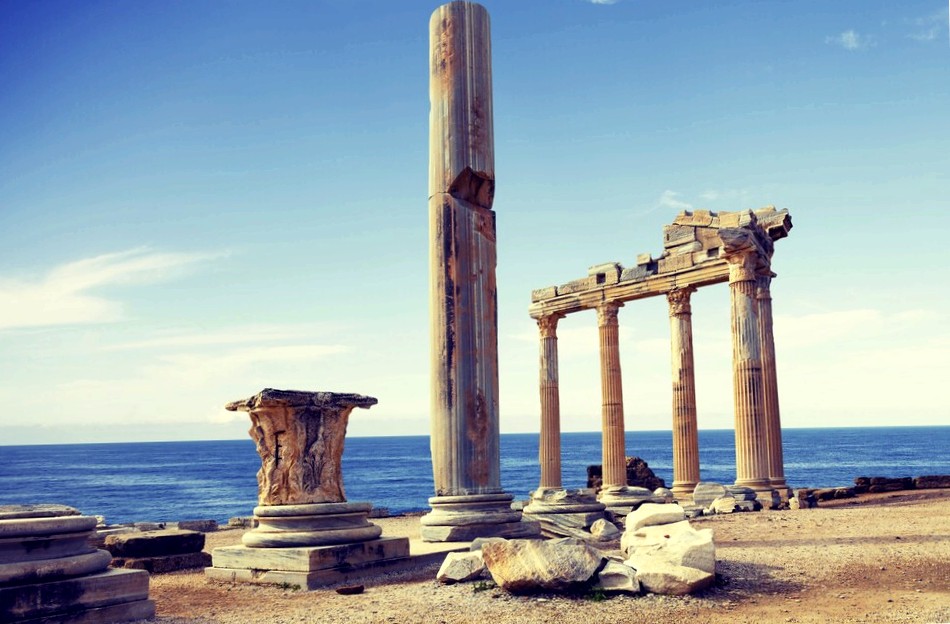 Rhodes is not only the largest of the Cyclades islands, but also one of the best Greek islands when it comes to combining a fantastic beach vacation with plenty of opportunity to explore the history of this fascinating country; the fact that the flight there is also possible without a stopover only makes the vacation on Rhodes even more attractive. First of all, you should definitely visit the old town of Rhodes Town with its castle and the magnificent Grand Master’s Palace, which you can also reach within 20 minutes from the airport of the island. Also in Rhodes town itself you will find the well preserved Acropolis including the stadium, while the rest of the island offers many exciting excursion destinations, for example the monastery of Filerimos, the church of Agios Nikolaos Fountoukli or the ruins of Feraklos Castle.

What connects mathematics with sweet muscat wine? That’s right, the Greek island of Samos. If you don’t want to be held up by long stopovers and transfers, you should definitely consider this wonderful island in the Aegean Sea for your next Greek vacation. Samos offers not only the birthplace of the mathematician Pythagoras and the delicious fermented grape juice, but also stunningly beautiful coastlines, unforgettable hikes on Mount Kerkis, and plenty of historical sights, including the ruins of the Heraion, the tunnel of Eupalinos, and numerous exciting museums. Since Samos is not very big, you can reach all places of the island within 90 minutes from the airport and Samos town is only 17 kilometers away. 25 minutes by car from the airport.

If you don’t want to stay in just one place during your vacation in Greece, you might want to consider a stay in Thessaloniki. Here you can get a taste for it: The 15 most beautiful sights in Thessaloniki

Back in the Cyclades, we come next to Samos, the next Greek island for all those who prefer to go on vacation by direct flight – or actually group of islands, because Santorini (or Santorini) consists of several islands. The airport of the archipelago is located on the main island of Thira (or Thera) and can be reached within 20 minutes from both Oia and Fira – the two largest cities of Santorini. Santorini has a lot to offer, not least its almost picture-perfect white-and-blue houses. But what you must not miss here is a view of the stunningly beautiful sunset, which you can marvel at the coast in Oia. With a cool drink and delicious Greek food, a vacation evening quickly becomes a truly unforgettable experience.

✈️Direct flights to Skiathos are available from the following cities: Dusseldorf, Munich

The small Greek island Skiathos in the Aegean Sea belongs to another archipelago, the archipelago of Sporades, and can also be approached from Germany without any stopover. What is capitalized here are fantastic beaches as well as a lively nightlife. At coastal sections such as the beach of Lalaria, the beach of Koukounaries or the famous Banana Beach you can enjoy the sun during the day and dive into the cool water, while in the evening you can go to the bars and restaurants of the island and party until dawn. And if you still want to explore the history of Greece, you can visit the ruins of the Venetian fort and the isolated monasteries in the pine forests of the island or take a ferry to the neighboring islands of Skopelos and Alonnissos or the Greek mainland.

If you book at the right time, you can benefit from low prices and save your vacation budget for the stay itself! Learn more about it here: The best time to book flights? We have the answer!

To finish off our list, we’re going to another very special of the Ionian islands, which you can easily reach by direct flight: Zakinthos (or Zakynthos) is once again a true paradise for all fans of stunning sea fronts – from the dramatic cliffs in the west to the idyllic beach towns in the east and north to uniquely beautiful underwater worlds complete with caves and more. But a very special coastal highlight here is the shipwreck beach Navagio, which is secluded in a bay that can only be reached from the sea, and – true to its name – offers its own shipwreck, in the middle of the sand. Apart from the beach of Navagio, which you should reach by boat from Agios Nikolaos, the entire Greek island can be reached in less than an hour from the airport in Zakinthos town.

You are also not averse to longer trips to destinations on the Greek mainland? Then how about an exciting trip to the exciting capital of the country? Here we present the 15 most impressive sights in Athens in front of!

And here is an overview of the Greek islands with airports, which you can fly to directly from Germany:

Note: The ranking of the most beautiful beaches in Greece is a simple enumeration without qualitative ranking. Direct flight information is as of March 2019, was obtained using Skyscanner search, and is subject to change at any time.