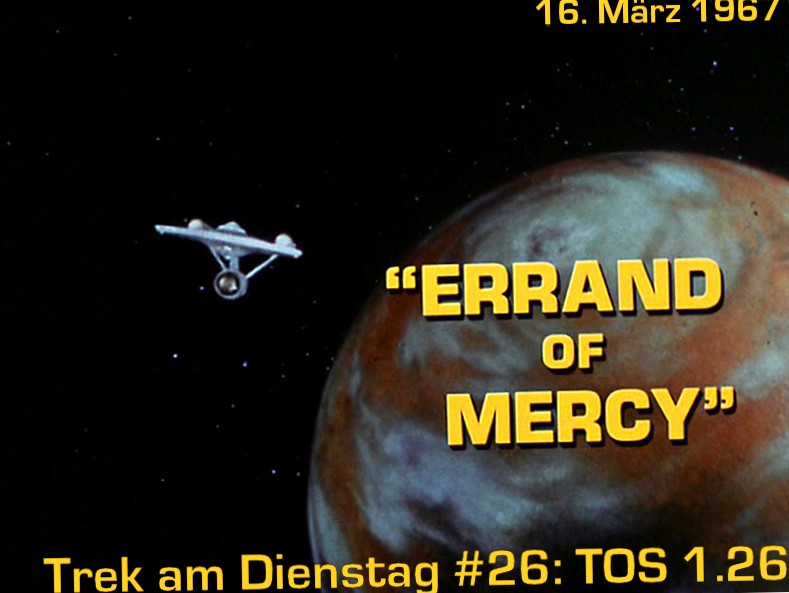 16. March 1967:
Another variation on the question from Episode 23: Imagine it’s war, everyone goes – and still nothing happens. Jim (this week played by Al Pacino) and Kor (Robert De Niro) had imagined the fight to be so nice.

I want to congratulate you on your great podcast. Have now listened through completely. I totally love listening to you guys. And what you always throw out in trivia knowledge is the madness, there every hardcore Trekkie can still learn something.

It’s also obvious that you know a lot about film and television of that time and therefore don’t just rashly knock everything down, but look at it in the context of the time.

About the episode: It was a bit negatively commented by you, especially that Kirk doesn’t immediately combine that they must be omnipotent beings I find understandable. Kirk hasn’t seen all the TOS episodes yet and noticed that there are omnipotent beings running around everywhere! In the Spiegeluniversum episode, by the way, we get to know a people that is actually as absurdly pacifistic as the Organians pretend to be here.

The episode reads well as a critique of the proxy wars of the power blocs at the time. The Vietnam War with American intervention started 1 year before? I don’t think the episode is meant to be satirical, but of course you have to exaggerate everything to be able to finish it in 50 minutes.

Besides all that, though, it’s just a lot of fun, especially the clashes between Kirk and Kor. John Colicos is brilliant as a mischievous villain who loves to be evil. One of my favorite episodes of TOS.

thank you for your kind words!

Perhaps I have once again expressed myself in abbreviated form… I would also have been very surprised if Kirk had suspected omnipotent beings behind the organizers. But that they are somehow more than they seem to be becomes obvious very early on. So the audience, not so much Kirk and Spock. At the latest, the moment Trefayne over-accurately detects the ground troops from his chair, I would have at least given a "wait a minute!" expected. That one accepts the later prison break with a shrug borders on negligence.

The Halkans from "Mirror, Mirror" are extremely pacifistic, quite clear. But they are not as ambiguous as the Organians are. With them think to no moment that there would be anything in the bush.

And I still believe that the later protest ("You don’t have the right to screw up the war for us – it would have been so nice") was deliberately drawn as a satirical anti-war message. The 45 preceding minutes seem rather not so, admittedly.

See you next Tuesday!
Sebastian

Am a bit late this time, but before the next episode I still want to comment.

I was also curious if there really is such a thing as a civilization scale. I would trust it to the scientists already. They always want to put everything into pigeonholes, even if you can’t compare apples with pears. The only thing I found is the Kardashov scale. After that our present earth is just on level 0.7 (of three). It would go too far to go into detail now, just google it yourself if you’re interested.

In the book "Star Trek Federation – The First 150 Years", the 4. Chapter u.a. also deals with the Treaty of Organia. On S. 118 there is a nice picture of Ayelborne standing in the office of the Federation president and in front of the Klingon chancellor at the same time.

Well, the Klingons have indeed made a remarkable development in the course of the different series. Still, I can’t get anything out of these guys, sorry.

But the interplay between Kirk and Kor was very amusing. What, no war? Too bad. Well, let’s go for a drink. The first round is on me. &
I don’t know if it’s been mentioned yet, but one of the new Discovery villains, a certain Kol, is from the House of Kor!

I am already looking forward to the next cast. "On a knife’s edge" I know so far only in the Blish version and I must confess, I understood only station. Maybe in two days I will see more clearly…&

Until then LL&P
Your Bridge

I just remembered Perry Rhodan. The Arkonids had such a classification system, with themselves on level 9 and the "primitive" humans on level 4.
There’s a pretty naughty scene in the spoiled 1967 movie. Then Perry Rhodan forces the Arkonid Thora to kiss him and when she says ‘How dare you?!" he says, "I’m level four," to paraphrase. I can go even lower if they want".
And then the primitive humans have to save the degenerated aliens… Nowadays it all has a certain flavor. Some come across as racist, others as sexist.

Again a great episode. But since you are talking about old Star Trek share would be today there are mods. Zb the mod for Stellaris Star Trek New Horizon, who BotF nochte will love the mod. Do you know Star Trek online? There’s some cool mission tos style stuff in there too. Talking about that would be a good Trek on Friday episode.

Hello together!
A bit more than belated, I wanted to thank you for this highly amusing episode. The whole absurdity, which is in such conflicts, becomes palpable. Of course war must be waged, so that the enemy knows about it. Where would you come to rely on some diplomats or other peacemakers!
What surprised me quite at the beginning, what Kirk actually wants to offer the Organians? How will he protect them, if he only has the Enterprise against a Klingon fleet?? For this he spits already really big tones…

For me the Organians are the nice grandpas of the galaxy. They play patiently with the grandchildren at noon tea in the doll’s kitchen, let them squabble, listen with half an ear, smile nodding and only intervene when it gets too colorful. They don’t explain themselves in my eyes, because everything takes place on such a different level, which they can’t really take seriously and are already too far away from it to want to deal with it fundamentally.
I read about it, "Parable about selfishness and overestimation", that sums it up wonderfully for me.

The episode was really nice to watch for me, I enjoyed the setting, the decor… The story didn’t trigger me as much as you in the cast, I could see it really good.

Since Scotty wasn’t there at all, Sulu got the command for once. – That reminds me, in the DVD bonus material it was mentioned that they originally wanted to create the thick male friendship between the two who love the ship – Scotty and Kirk. Since they hardly meet each other, Spock was chosen and to complete McCoy was added, who is therefore often allowed to stand around on the bridge.

The Dahar Master appears. John Colicos, my favorite Baltar plays the first of the three main Klingons. And it does so brilliantly. After Khan he is also my favorite villain.
As so often I learn a lot from you again in this episode. The origin of the Klingons as "cheap Romulans" is kind of embarrassing, but plausible. The gym mat – how could I have missed it?
But you also missed a huge logic hole, just like Spock. The medieval goatherds have automatic doors! The Klingons open and close the door to the Ratskeller by hand, but otherwise they move by themselves. The most glaring thing is the cell door. It swings open by ghostly hand and only then Aelburn comes shuffling around the corner. If Spock had his grey cells together, he would have had to conclude that the Organians are either technically more advanced than they seem or they are telekinets, so they should be treated with increased caution!
What else do we have? Captain Sulu is allowed to sit in the middle for the first time. So two milquetoast beards have to take the wheel to make him look superior. Since Wesley Crusher doesn’t exist yet, they are probably some interns from the set.
Funny, the Organians have something like a prime directive, I guess the Federation suspended it this week. I can’t really believe in your theory with satire. Even if the authors could have meant it that way, the average American thinker doesn’t get it. Right to war – kind of makes me think of Trump.
So what do we have as a conclusion from which the evaluation arises: The peace treaty of Organia as a milestone in the Star Trek plot, for the first time the Klingons, even if still quite unfinished, an outstanding John Colicos.
So thumbs up and enjoy, we consistently suppress the thought of the next episode.

Hello, another note about the appearance of the Klingons. Supposedly, that’s where the performer of the Kor is partly responsible. John Colicos probably once reported in "Starlog Magazine" that the chief make-up artist, Fred Philips asked him what he wanted to look like… Answer: "…Let’s go back in history, and think of Genghis Khan, because Kor is a military leader, on his way to overrun the universe with his hordes…"." His hair had just been very short and combed forward and the went on to say, "Dye my hair black, and put a wave in it – give me a slight Asian Tatar touch. Let’s take a brownish-green makeup so that I look like not quite of this world." Two hours later, he would have looked like he did in the episode…

In short, John Colicos is responsible for "blackfacing" according to this version…