Well, vacationers, are you on the Canary Islands right now and do you feel like a weekend trip to La Gomera?? We have an itinerary that will help you get the most out of your two days on the green island.

Why a trip to La Gomera is worth it?

La Gomera is after El Hierro the second smallest island of the seven big Canary Islands. On an area of about 370 km² live here about 21.000 people. The landscape of the island is characterized by rugged coasts, deep gorges, volcanic mountain ranges and the dense cloud forest in the Garajonay National Park. Especially hikers get their money’s worth here, because the island has a 650 km long network of hiking trails waiting to be explored. It’s obvious that this can’t be done in two days – that’s why we suggest a route that at least doesn’t leave out any of the places worth seeing, even if this means that the hiking will be a little bit too short.

It is very easy to get from Tenerife to La Gomera. We could take our rental car with the ferry quite uncomplicated – A luck, because it is absolutely necessary on the volcanic island.

So we start from the ferry port in San Sebastian, the capital of the island, which we reach after a ferry ride of about one hour. Capital city sounds so big, but since here only approx. 9000 inhabitants live, one can walk quite comfortably once by the city. Thereby we pass the Plaza de la Constitucion with the Columbus statue. The inhabitants of Gomera are very proud that they welcomed Columbus before he died on 6. September 1492 from here supposedly set out for India and discovered America in the process.

If we now walk further into the pretty park, which we can already see from here, we arrive at the Torre del Conde (Tower of the Count). A defense tower which, like the nearby church Iglesia de Nuestra Senora de la Asuncion, was built before the conquest of the island. The tower was commissioned by Hernan Peraza for protection against rebellious natives. 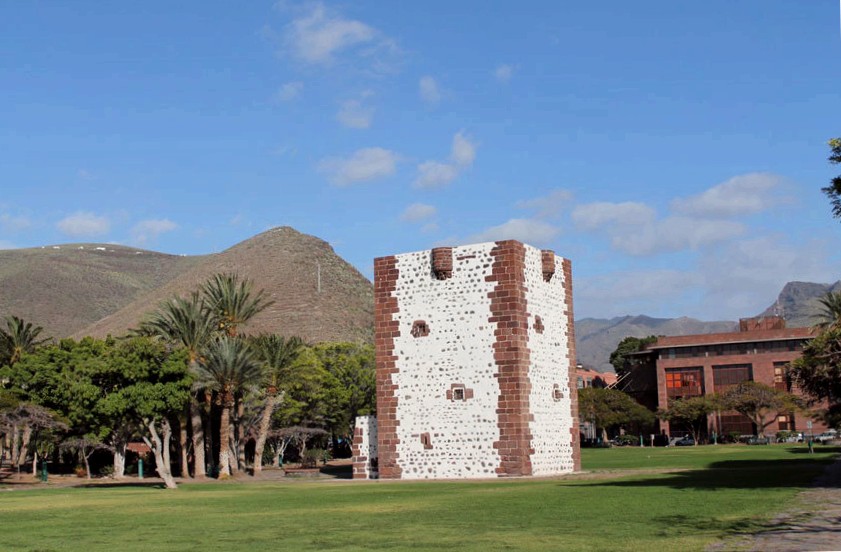 Afterwards we get back into the car and drive on the GM-1 towards Agulo. The road is picturesque and every now and then there is a parking bay where you can stop for a moment and enjoy the view through the gorge back to San Sebastian. We drive past the Majona Nature Park – There are also some hiking trails through the park starting at the road. After a drive of about half an hour we reach the mountain town of Hermigua with its impressive twin rocks that seem to watch over the town. In Hermigua there is a small, exciting museum about the history of La Gomera.: In the Parque Etnografico de La Gomera one strolls through a plantation& a gofio mill and learn how the people here were able to feed themselves and build a life despite the most adverse conditions.

From Hermigua we drive to the sea. Already from above we discover several towers, which stand in front of the coast in the water. The Pescante de Hermigua. The four stelae are a relict from the 20’s and were put into the sea as a harbor jetty directly in front of the coast. Although there was already a port jetty at that time, which both allowed passengers to board ships and facilitated the loading and unloading of ships. With the second pier, ships further away from the coast should be easier to reach. Only the jetty was never finished because of the world economic crisis, crop failures and the Spanish civil war. 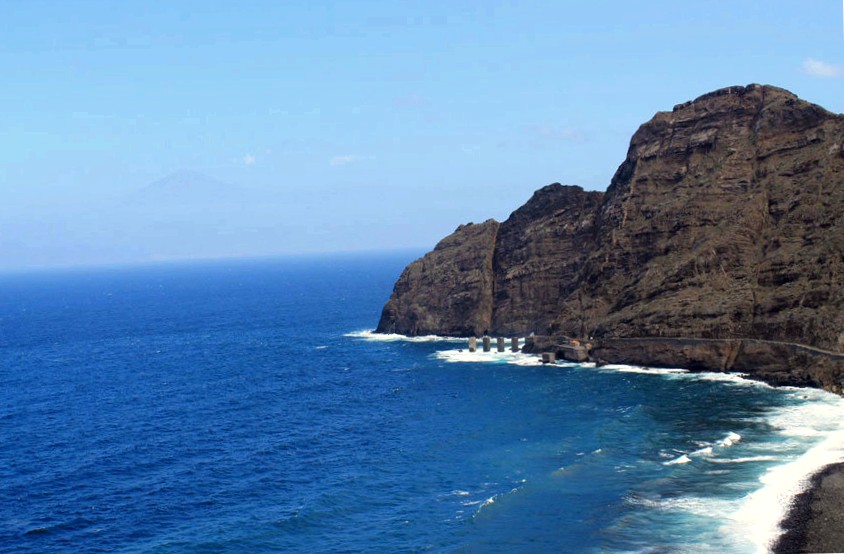 The four stelae in front of the coast of Hermigua (© le_mts17)

When we drive on the coastal road into the mountains, there is a wonderful view back to Hermigua with its harbor jetty. And with a bit of luck and clear skies, you can even see the Teide rising from the clouds around Tenerife. After a few minutes we reach Agulo. We continue and turn sharply left behind the village and drive steeply uphill to the Mirador de Abrante. Here a cafe with a glass floor awaits us, where we can take some steps over the gorge (if we dare) and see the Teide in the distance.

Now we continue towards Vallehermoso. Already on the way we discover the Roque Cano from a distance, here it is worthwhile in any case times to stop at a parking bay and to look over the green valley with the many terrace fields and palm trees. 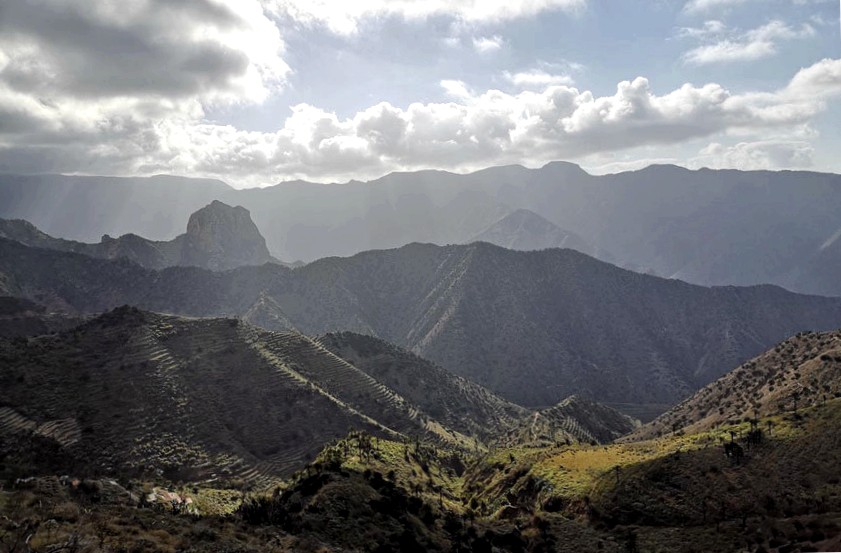 The Roque Cano above Vallehermoso (© le_mts17)

Passing through Vallehermoso, we are already on our way to Valle Gran Rey. On the way down to the valley of the great king, we pass a great viewpoint of the artist Cesar Manrique, with a palm oasis and a meanwhile abandoned restaurant. The drive through the deep gorge alone is absolutely worth seeing& we just had to stop every two minutes to see every angle&

It is best to book an accomodation here, because at Playa del Ingles you can enjoy a breathtaking sunset next to the high cliffs. 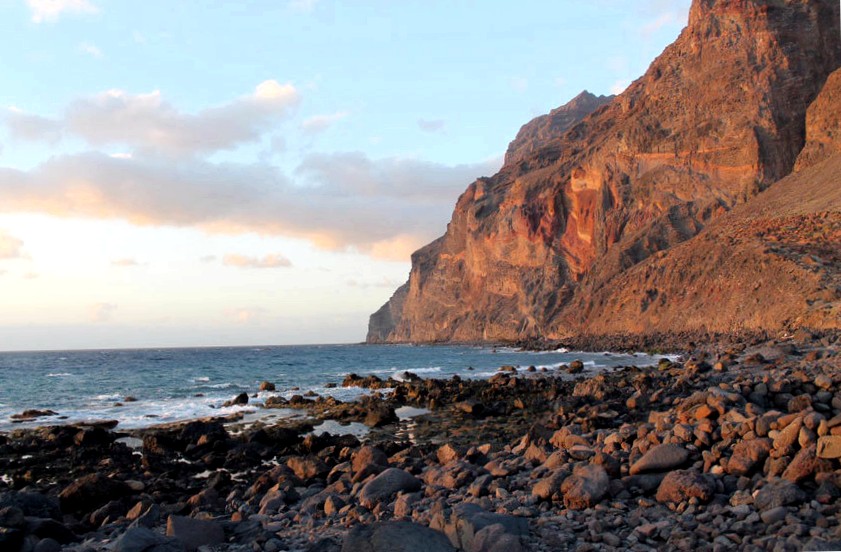 A breakfast in one of the nice cafes is a good start into the second day. We can recommend a visit to the small cafe Noah’s Ark. Here you can find a delicious savory and sweet breakfast offer and for those who want to try something different, coffee specialties and milkshakes, for example with the Gomeric avocados.

From Valle Gran Rey we drive back up the gorge to the pretty mountain village of Cercado. From here we continue in the direction of Playa de Santiago and pass the village of Chipude. If you have a little more time, you can start here for a hike to Table Mountain, which we drive around once by car.

A highlight is the drive through the gorge near Alajero to Playa de Santiago. At the top it is green and woody, at the bottom it is dry and rather bare – similar to the south of Tenerife. We made a small detour to the beach. Here you can lie on the beautiful, black volcanic sand and if the weather is nice, it is also worth to jump into the cold water.

The road GM-3 leads us afterwards into the unique Garajonay National Park. Here you can find, as only on a few other European islands, an impressive and original laurel forest, which invites with its lush, green vegetation to exploration tours or leisurely walks.

Now the weekend is almost over and we are also almost around the island. But before we return to San Sebastian and the ferry port, it’s worth stopping at Rogue de Agando, a volcanic rock tower that juts 180 meters out of the earth. If you follow the road a little further, you will reach the Mirador Morro de Agando. From here, there are once again spectacular views of the Roque itself and over the national park. 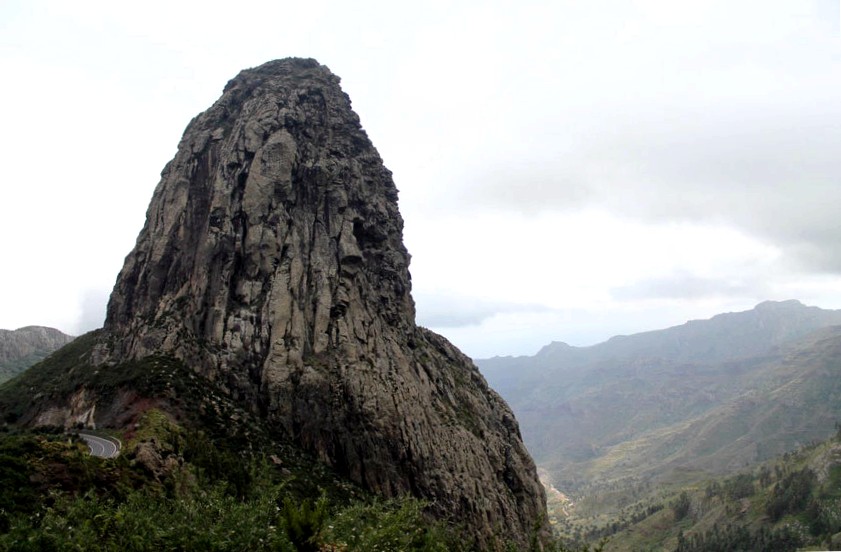 If you have some time left in San Sebastian before the ferry leaves, you can stop at one of the cozy restaurants, such as the Pizzeria Agando, at the Plaza de la Constitucion, to let the weekend come to an end.