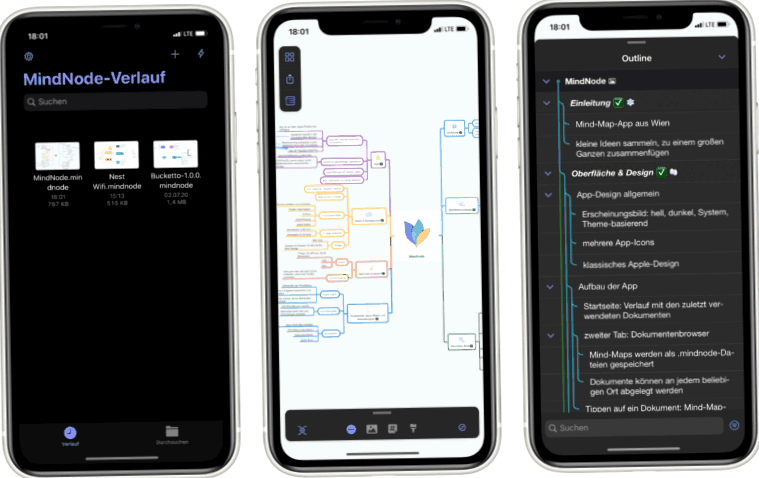 Mind mapping is a technique to visually represent thoughts. Normally you do this on a sheet of paper, but with MindNode it can be done purely digitally as well. How exactly, you will find out in our review.

MindNode (affiliate link) is a mind map app from Vienna. The company behind MindNode advertises that you can use the app to quickly capture small thoughts, so that these can then be combined into a large whole, the mind map. Let’s have a look at it in detail.

For the design of the app, the developers have not chosen their own concept, but have adopted standard design elements from Apple. But this is not bad at all, because everything looks very tidy this way. MindNode supports a dark mode, a light mode and can also adapt to the selected mind map theme if desired – more info on that soon. In addition, there are several different app icons in the version for iOS and iPadOS.

If you open the app, a page with the last opened mind maps appears. If you click on the second tab, you get to a document browser. The maps are namely called .mindnode-Documents stored, which means they can be stored anywhere, including Google Drive or Dropbox, not just in iCloud. If you create a new document or open an existing one, you will get to the mind map interface.

At first sight this may take a little getting used to. What is hidden in this menu? Oops, this button has disappeared, where did it go?? These are questions that might go through the mind of a new user. After some time, however, the structure makes sense, so you don’t have to think about these things anymore. But labels of the buttons would be better for the beginning anyway. The developers still have a lot of work to do here. For a beginner and layman this seems totally confusing.

MindNode is also available for the Mac.

If you tap on a node of the mind map in the iOS and iPadOS app and wait a short while, a small ribbon appears, which among other things hosts the option to delete a node. This is confusing, as most other iOS/iPadOS apps rely on the context menu that Apple introduced with iOS/iPadOS 13. Since this one is called by a long press, a little getting used to is necessary here as well. The modern context menu is only available on the iPad when it is connected to a trackpad or mouse.

MindNode unfortunately relies on the somewhat older ribbon in the iOS and iPadOS version.

On the screenshots you can already see clearly: Wow, the area gets quite fast full, if you let your thoughts run free once. But the developers of MindNode thought about this and included the possibility to collapse nodes easily. This way they disappear when they are not needed and the user can find his way around more easily. For a better overview while working with the iPhone or iPad you can also use an external monitor. The app allows you to show the entire mind map on the large display, while you make the changes on the Apple tablet itself.

For a faster navigation through the mind map, we would have liked to see that tapping or clicking on a node triggers a zoom to the node, so that it is displayed in the center of the map.

Several different themes are available for designing mind maps. These differ by things like the background color, the font, the node shape and the colors of the nodes. The lines that connect them can also be designed. Besides the color, you can define whether they are curved or straight. Especially the straight connections make a mind map look a bit more formal and thought out than with the curved branches. As already mentioned, the app also offers different shapes for the individual nodes. Among them a simple line, a rectangle, a rounded rectangle, a capsule and some others. Since version 7.3, which appeared a few days ago in the App Store, there are even frameless branch shapes. Also, since the update, the user can decide whether child nodes should branch vertically or horizontally from a parent node.

However, the customization options do not stop here. There are two sticker sets, which fit to two of the offered themes. These can be attached to nodes so that individual elements can stand out from others. Instead of a sticker you can also use a photo from the gallery. The only thing that is a bit of a shame is that there are multiple mind map themes, but only two corresponding sticker packs.

A mind map can be customized to your heart’s content.

Another practical feature is that there are several ways to apply the style of one node to any number of others. This saves quite a bit of time when creating these mind maps.

Now there are different tools to change the mind map. Among them, first of all, various tools to manipulate nodes – from creating to balancing, moving and disconnecting, everything is there. When creating a node, you can even choose whether you want to create a main node, a parent node (i.e. a node before the current node) or a child node. Then there is a feature that puts the current node together with its child node in focus. This should lead to a more productive work. In addition, a node can represent a link to a web page or another app.

To plan whole projects in MindNode, the developers have implemented the possibility that a node can be a task to be checked off. It’s nice that a parent node with multiple task child nodes gets a progress bar that shows in percentage how many tasks you’ve already completed. 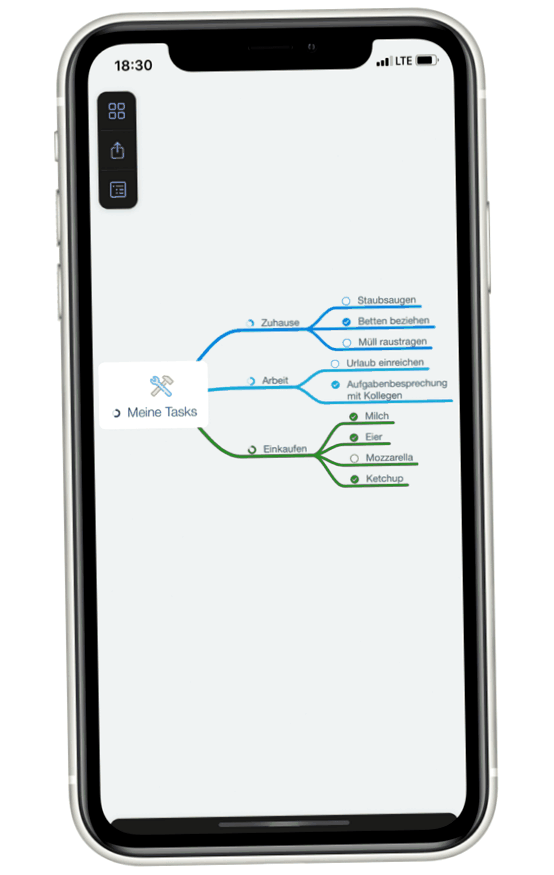 In order to give the thoughts a context, you can use the tags. These are small colored dots with a label that can be attached to a node. For example, in a mind map for a school subject, you can use a tag that shows that you have already learned and mastered a subject area. Since MindNode 7.3, it’s even possible that you focus nodes with a particular tag.

With iOS 13 and iPadOS 13 Apple introduced the shortcuts. App developers can provide actions that can automate processes in an app. The developers of MindNode have done that and integrated four different actions. There is a "Quick Entry" action and one called "Create New Mind Map" that effectively do the same thing: You provide a text (optionally via clipboard) and then the mind map is created from it. The depth of a node is determined by the number of indentations of a line. Why there is the exact same action twice for this is not known. Then there are two export options for a short command. One action exports the whole mind map, the other saves only the created tasks. These tasks can then be inserted into Things 3 or OmniFocus, for example.

The quick input feature works the same as the first two shortcut actions mentioned above. So each line represents a node, and the number of indentations determines the depth of the node. But optionally you can attach tasks, tags and notes here. After that, this scribble can be converted into a mind map.

And yes, MindNode is even available on the Apple Watch. However, the clock version is only for viewing mind maps and checking off tasks. It’s quite handy if you want to quickly trace your thought processes on the go, but the option to speak nodes via Siri would have been desirable. 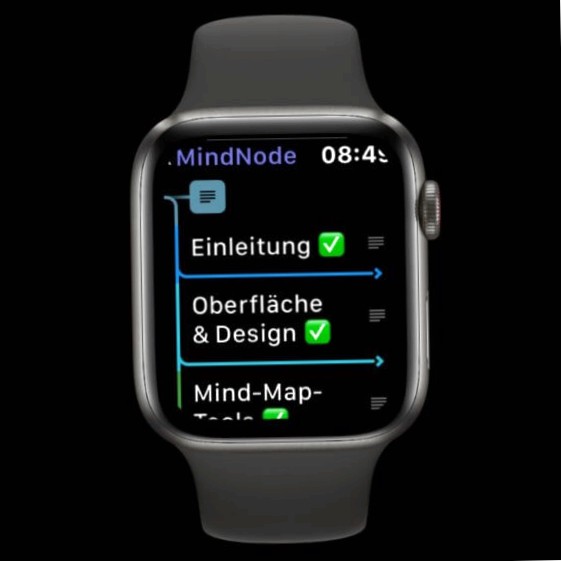 Here you can see MindNode on the Apple Watch.

Now the mind map is fixed and ready, but what comes now?

The most obvious thing is that you still open the map in the app and work with it from there. However, there is also the option to export. The usual formats are here of course at the start, so PDF and JPEG. But there is also a third option, exporting the tasks for Things, OmniFocus or Apple Reminders (as it is also possible with the shortcut action).

For us at Apfelpage, however, the outline feature is probably the most practical. This feature is a listing of all nodes including all sub-nodes. For example, when writing an article, you have the finished structure of the article in front of you without forgetting anything. How this looks exactly, you can see on the screenshots – this app review was planned completely in MindNode and written down with the help of the outline. The only criticism of this functionality is that it is often not clear how the outline changes when you move a node in the map.

MindNode is available on iOS, watchOS, iPadOS and macOS. There are even several signs that there might be a web version in the future. But that’s not more than speculation based on a few clues.

The basic things, like creating simple mind maps, can be done without subscription or in-app purchase. For further customization options and features, such as for quick entry or exporting tasks, you will be asked to pay a subscription fee. 2,99 Euro costs a monthly subscription, 21,99 Euro an annual one. A 14-day trial period is included.

If you have a Setapp membership, you can even get the Mac version of MindNode for free. However really only the Mac version. Unlike Ulysses, you still have to pay extra for iOS, iPadOS and watchOS with Setapp.