Deme (50) calls himself a "bastard" – because that is what it was often called. As a queer person with Mexican-Spanish heritage and Roma roots, he uses negative experiences to drive his human rights work. 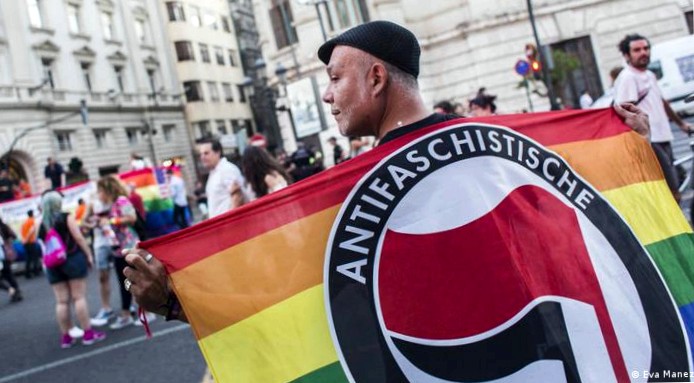 Demetrio "Deme" Gomez at a rally in Valencia

"I want people to question how they perceive and judge themselves and others. How do you define your own identity?? What are your criteria for this – and do these criteria match your values??"

Demetrio often asked himself these questions. The responses to this have changed over the years, and he thinks that’s normal – because people change and evolve. The challenge behind this is that many would not dare to look deeper into themselves and therefore do not develop empathy with people who have problems with their complexity: "Can you imagine what it is like to be a Muslim LGBTQ Roma in Romania? It’s fine if you can’t – but then you should stop judging people whose situation and identity you have no idea about."

Demetrio, also known as Deme, is one of the best known LGBTQ activists for human rights from the international Roma community. This gives him a very broad perspective and helps him see the larger patterns behind discrimination that many community leaders miss: "I love being with people who call themselves ‘different’ and don’t want to be pigeonholed. Being gay, Roma or Muslim does not automatically mean you are capable of empathy for other disadvantaged groups." 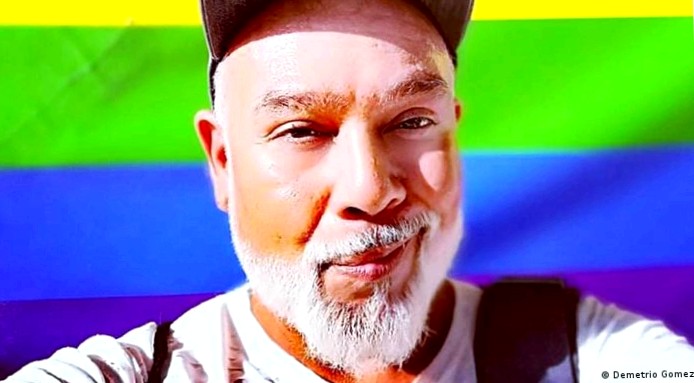 Deme became an activist while he was still in school in Valencia. Together with his comrades-in-arms, he founded the first Roma youth organization in Spain. They worked directly in the streets of the poorer neighborhoods. During the association’s first campaign, he came into contact with the international Roma civil movement. "At the beginning it was strange because this was not a homogeneous group. Some spoke Romani, some did not – some were very progressive, others conservative. However, all of them were united in the goals of supporting the youth and increasing the participation of women in our communities."

The result of these encounters was the creation of FERYP – the European Roma Youth Forum in 1996. It was the first European Roma youth organization and it deliberately focused on political work and lobbying.

Deme felt how many opportunities were opened up by the international community. Being the positive and extroverted person that he is, he quickly built a strong network. Today he describes two moments as the happiest of his life – one is when he arrived in Europe, the second is when he met the Roma movement.

Although that was several years ago, it would take until 2016 for him to experience a similarly moving moment. This time it was the first meeting of the Roma LGBT platform in Prague.

Equipped with his practical competence and empathy, he has already worked for many European organizations, although he has never attended a university. This is mainly because he has knowledge and skills that go far beyond what you can learn at any school, he tells.

Identity as a cocktail

An example of this is the complex way families deal with their own history. Demetrio’s grandfather was always a controversial person within the family. He had fought on the Republican side against the fascists in the Spanish Civil War. His grandmother divorced and remarried – this time to a Roma from Poland, known as "the Hungarian" Named.

In the meantime, his grandfather had fled to Mexico, where he met a woman with native American roots – thus Demetrio’s mother was born. Moreover, no one in the family spoke about their Roma identity to avoid further differences: "My identity is a big cocktail, a wild mixture. I therefore feel particularly connected to that part of my personality which is Romanes, and to the Roma movement."

Malaga: Procession of the Roma community during Holy Week

Many people know that Roma are historically linked to the famous Spanish tradition of flamenco, explains Deme. But what many people don’t know is that in the Middle Ages Roma were tortured and killed if they dared to speak the Romani language: "Roma are very exoticized in Spain. On the one hand everyone thinks we are poor and steal, on the other hand they think we are magicians and all excellent musicians. Both are false and based on stereotypes."

These stereotypes are so strong that Roma themselves sometimes think they have to identify with these stereotypes. The myths of the mainstream act as a mirror, imposing a false identity on all those Roma who cannot know their history due to centuries of exclusion from education and public discourse: "Many of our people are afraid that they would have to give up their traditions if they dared to live a modern life. But now, at this moment, we are creating a new lifestyle that combines traditions and citizenship work. We include feminism and all kinds of diversity because that’s what it takes to heal and grow. This will enrich our culture and take it to a new level."

For Demetrio, youth plays a key role in this transformation. Just because he’s more experienced than his younger colleagues doesn’t automatically mean he has to take a leadership position: "We have a really brilliant young generation. It has the power to fight for change. I offer my knowledge to the young people so they can implement their own ideas. It is not my job to tell them what to do. For some things you need experience, but for other things you need the freshness and innocence of youth who believe in their ideas without compromise."

However, he is concerned about passing on certain values to the leaders of the future: "It is very important to think decolonially. Being anti-fascist is very important. Being aware of what ‘white privilege’ means and the consequences of that is very important. Only those who know the structures and history behind current events are capable of analyzing them and dealing with them in the right context."

One thing that hurts Demetrio is the success of far-right parties within disadvantaged groups: "For me, this is completely against our ‘Romanipen’ – our culture. We have always helped the weaker – and they have helped us survive. So how can it be that today we have conflicts between Roma born in the country and migrant Roma?? This is exactly why intersectionality and discourse about it is so important to our community and society in general."

Deme is aware that right-wing populists use certain techniques to convince people who are in a difficult economic situation: "People who are constantly struggling to eat and survive don’t have time to think about political discourse. Right-wing populists provide them with an enemy to blame for their problems. The campaigns focus and abuse the feelings of these people."

Another reason for the growing sympathy towards populists is hidden in history, as Demetrio points out: "We have always been excluded from the political discourse. That’s why many Roma think this is ‘gadjo’ – that is, something to be left to white people."

For Deme, therefore, it is only logical to approach the work at political levels and support those who are politically engaged. Currently, three representatives from the Spanish Roma community sit in the EU country’s Congress. Together with them, Demetrio is fighting for a law that ensures equal treatment in Spain. He hopes this will help combat hate speech and hate crimes: "Human beings are complex. Society should not make anyone feel that there is no place for them in this world. I have realized that I am lucky to have so many cultures and resources to draw on. Having to choose one of them would be like losing a part of my soul. I have learned to recognize the difference between my identity and the projections from the outside."

Demetrio found some parts of his identity through activism when he was already a young adult: "Our culture of memory, our resistance, our history in the Spanish Civil War – all this is hidden history. Nobody knows that there was a general secretary in the anarchist party who was a Romni. No one knows that we helped the Republicans survive in the mountains. These are important parts of our history that no one talks about. But they are relevant to our identity, pride and survival."

Demetrio Gomez was born in 1970 in Tijuana (Mexico) and lives in Valencia (Spain). He has over 30 years of experience as a human rights activist, advocating for minorities and an inclusive, decolonial and intersectional perspective. He works as an expert and trainer for the Council of Europe and the European Commission. He is an active part of the European LGBTQA+ Roma platform and the organization Ververipen – Roma for Diversity.