With the right DLNA media server you can fully enjoy your private music collection. Streaming music from a central storage (NAS or USB hard drive) via the AV receiver or HIFI system. Watch vacation, music videos, movies, photos, media library, YouTube on the big TV. These are the possibilities offered by a DLNA Media Server.

A DLNA media server is usually located in the living room. For operation in this room, certain conditions should be met.

The ready-made boxes (media servers) like Apple TV or WD TV Live are also very good, but they do not meet all my expectations. I would prefer an open system, where I can also make adjustments myself. The ready-made boxes only fulfill this to a limited extent. The price of the Apple TV box (2nd or 3rd generation) is still relatively high. Another solution was needed. I quickly came to the project Raspberry Pi in connection with XBMC.

The Raspberry Pi is a computer the size of a credit card.

It consists of a circuit board. My model is equipped with a 700 MHz processor and 512 MB memory. Has two USB 2.0 connections, one HDMI (Full HD) and composite video output, the sound output is via HDMI or 3.5 mm jack plug. 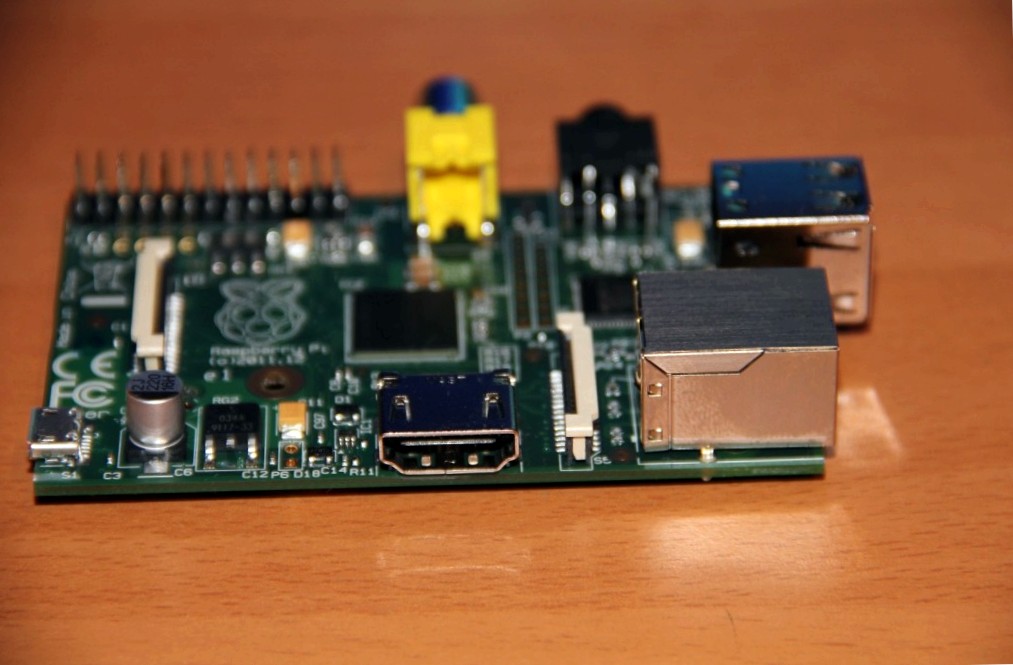 SD (SDHC and SDXC) cards serve as a hard drive. A 10/100 MBit connection is available for the network connection. The computer is powered by a small power supply unit. The energy consumption is about. 5V, 700mA (3.5 watts). As operating system Linux derivatives (Debian, Fedora, Arch Linux) are available. A suitable housing is available in many different colors. For the whole package (Raspberry Pi, power supply, case) I have about. 55 Euro paid.

Since the Raspberry Pi is only a circuit board, nothing really needs to be assembled. The circuit board is simply inserted into the housing. ready is the DLNA Media Server. A simple SD card serves as hard disk.

The DLNA Media Server can be completely controlled via smartphone, tablet or browser. I like the control via smartphone (iPhone 5) best. Only one app is needed for control.

Hello,
Is it possible to use the RPi only as a server and then watch the media via the smartphone or send from the smartphone to the TV (Chromecast)?

I think Raspbmc or OpenElec make more sense if you actually connect the Raspberry via HDMI to a TV and virtually make a SmartTV with it. If you only need a DLNA server m.E. offer a bit more lightweight solutions.
I use on my RaspberryPi z.B. the Squeezeboxserver or. Logitech Media Server (OpenSource) and use it to power my Squeezebox (and my cell phone), the SmartTV (LG) also recognizes the mounted files and can access pictures and music without any problems (I don’t have any videos on it yet).
In addition, BTSync for data synchronization between the devices and Samba (primarily to be able to write backups to the connected hard drive) are running. If I find the time I will also add a CalDAV and CardDAV server (maybe. also Owncloud) on it. With this you can then do much more than just a media server.
All this has then only a web gui, and various Android/iOS apps to control, but the graphical interface of XBMC is m.E. not necessary for a SmartTV, it fetches the data also this way.
I set up the whole thing under Rasbian, so with a graphical interface, then I plugged the Raspberry directly into the router (in the far corner) and let it boot without a graphical interface. The little things that still need to be done now are done via SSH (actually only sudo apt-get update and sudo apt-get dist-upgrade every few weeks) or web gui of the different servers.

For a normal TV, but XBMC is actually a mature solution whereby with me the Mediatheken (ARD etc.) ran rather slowly.

hi,
the HDD is connected to the ras via usb and is recognized and played by xbmc.
the dlna service is also shown in the tv but i can’t access the hdd.
I do not know which path to use with the minidlna.conf must enter and how the rights and who the folder owner must be so that the tv also displays the folder and event. plays.
mfg

I can not tell you now, unfortunately, what you have to enter at the minidlna. Just try the system from my post. So it works in any case.

Hello,
I have installed on the Ras minidlna.
My Sony tv recognizes the Ras but I can’t see the inhale of the connected usb Hdd.
what am I doing wrong?
mfg

Is the USB hard drive working properly? Is the hard disk recognized on the Raspberry? Is it a 2.5 or 3.5 inch hard drive?

I have a problem.
I have successfully set up the Raspberry Pi as a Nas and everything is running fine,
but the transfer of new data to the external hard disk as network storage is of course extremely slow.
How can I speed up the data transfer without disconnecting the hard drive and attaching it to the Pc?
I have tried it with a y-cable, however, I get about then no more content of the plate displayed…Is it the cable or has it other reasons?

The Raspberry Pi has a 100 MBit/s LAN connection. With this you should get ca. 8 MByte/s can be copied to the NAS. How large is the data throughput with you?

Thanks for this very interesting post. This looks to me like a real alternative to a NAS system. There’s just one thing I didn’t quite understand: Is this a DLNA client or server or both?
Would it be possible to connect to a USB port of the Raspberry Pi an external 2.5″ hard drive to connect, in order to then also operate the system as a DLNA server? Would such a hard disk have to be specially formatted?? Thank you very much for your answer, mfg Lorenz

The Raspberry Pi is first and foremost a DLNA server. But it can also act as a client. I have another NAS integrated in my network. From there multimedia files are offered, which the Raspberry Pi receives and displays. The NAS is of course DLNA capable.
You can attach a 2.5″ hard drive. This works without problems. All media data can then be offered in the network. You can also connect a hard drive at the same time and include a NAS as another source. You have several options. Also the integration of a Windows share works without problems.

I don’t know, but according to my understanding XBMC is not a DLNA server, but a DLNA client. A DLNA server for me would be Twonky-Media. I’m using XBMC, it’s also great, but I haven’t found a way to stream content to another device yet.

XBMC is also a DLNA server. You can also stream with it. The XBMC also provides multimedia content in the network. That works nevertheless completely simply. What is wrong with you?

" The installation of the Raspberry Pi can be done under Windows or Mac." and of course without any problems under Linux – why not??