First of all, it must be clarified at this point what significance and influence Christianity has in China today. The majority of religious affiliation in China is the so-called folk faith, which was influenced by Chinese Daoism and Confucianism, among other things. Next in line are Buddhism and Islam, the latter being especially prevalent in western China.

Proportion of Christians in China 2021

If you look at the official figures of religious affiliation in the Middle Kingdom, the Christian share is very small. Moreover, it is not possible to say exactly how large the current proportion of Christians in China is. This also has to do with the leadership in Beijing.

The last official government figure is from 2018. According to this, there are 36 million people in China who feel that they belong to Christianity. It should be noted that the Chinese government tends to be critical of Christianity. The unofficial number of Christians in China could therefore be significantly higher.

For the comparatively small part of the Chinese population that is Christian, Christmas plays a major religious role. Interestingly, however, many non-Christian Chinese also find Christmas important.

As described in an earlier article, Christmas is a foreign holiday for most of the Chinese population. However, this does not mean that it has no significance at all. In fact, Christmas elements are becoming more and more present every year – especially in China’s westernized cities. 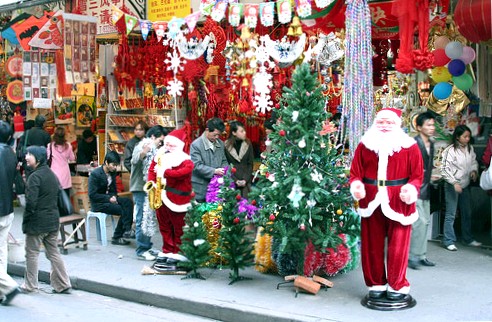 Christmas in China has now become primarily a commercial event. In the shopping centers and malls of many major cities, Christmas decorations are hard to miss. In addition, there are countless sales offers that get a Christmas touch. Western premium and luxury brands of course do not miss the marketing opportunity.

Among the general population, it is mainly families with children and (newly in love) couples who enjoy the atmospheric Christmas season. Here, religion usually plays no role, but this can also be said for western industries that use Christmas as an advertising opportunity. It is not surprising that some describe Christmas in China as just another Valentine’s Day. After all, it’s just as massively exploited for advertising.

In 2021, Christmas will once again be the order of the day in China. This is not least due to the fact that trips abroad, for example to Germany with its beautiful Christmas markets, are almost impossible because of Covid-19.

Do Chinese celebrate Christmas? Yes, a small part of the Chinese population celebrates Christmas for religious reasons. For the majority, on the other hand, it is more of a commercial event reminiscent of Western culture. Many Chinese people find walking and shopping in a Christmas atmosphere simply "nice", "exotic" or "cool".