Asian cuisine dumplings recipe: so delicious taste the dumplings from the steamer

On the menu of a Chinese restaurant, they are often listed under the name dim sum: This is a generic term for small dishes that are steamed or deep-fried. The word dumpling, on the other hand, simply translates as dumpling – and it can be filled not only in different ways, but can also be shaped. In the following recipe, we will explain step by step how to make your own steamed jiaozi dumplings with a minced meat and shrimp filling with just a few ingredients. 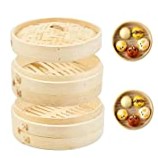 You will need these ingredients for the dumplings recipe

TipIf you can’t find some of the ingredients in the supermarket or on the internet, you will surely find them in your nearest Asian store.

How to properly prepare the dumplings 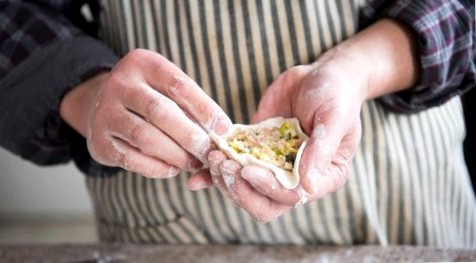 Step 1: First put the fresh ginger as well as the garlic in a mortar and pestle both to a fine paste – the amount may vary according to personal taste. If you don’t have a mortar at home, you can also use a kitchen knife to finely dice the ingredients.

Step 2: Now mix the minced meat with the ginger and garlic, then season the mixture with the fish sauce, chili paste, chili jam, soy sauce as well as salt and pepper. Here, too, you can adjust the quantities of ingredients to your taste. The more you use, the spicier the filling will be in the end.

Step 3: Free the shrimp from the head, tail, shell and intestines – the latter can be easily removed by pricking the top of the peeled shrimp with a toothpick and slowly pulling out the fine intestine. Then chop the shrimp very finely and mix with a little salt and the lime leaf cut into thin strips.

Step Four: Now whisk the egg in a small bowl with a fork and brush the individual wan tan sheets on one side with it. After that, put a little of the minced meat mixture in the middle of the dough and next to it layer as much shrimp mixture. Alternatively, you can spread the fish and meat separately on the leaves.

Step 5: When all the mixture has been spread on the dumplings, take one sheet each in your hand and press the dough together so that the dumpling is either completely closed at the top or you leave an opening so that the layers are visible. Last but not least, enclose the pockets with thin strips of spring onions. 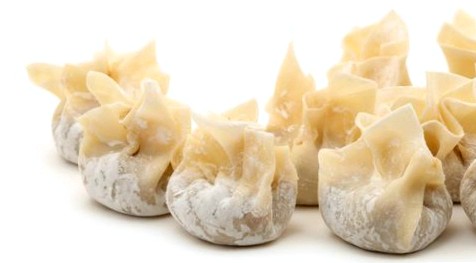 Steam cooking: This way, the dumplings will be ready to serve in just a few minutes

When steaming, it is important that the dumplings do not come into contact with water at any time, but are cooked exclusively in steam. A normal saucepan is not so suitable for the preparation for this reason – unless you have a special insert for steaming.

If you want to use a classic steamer like the ones in China, we recommend this traditional bamboo steamer . The little steamer baskets can be used for both steaming and serving. Due to the gentle preparation at 100 degrees for approx. ten to 15 minutes, the dumplings are particularly flavorful.

Tip: The finished dumplings should be eaten immediately after cooking, as they quickly dry out in the air.

We wish you a good appetite!

DIY: Here’s how you can make the dumpling dough yourself

If you are ambitious and want to make not only the filling, but also the dumplings, we give you another instruction to follow. To prepare the dough for the pockets, all you need in the first step is the following three ingredients:

Using this quantity guide, you should come up with approx 40 dumplings come – depending on the size of the dumplings, the number can of course vary a little.

Step 1: Put the flour in a mixing bowl with the salt and gradually mix the two slowly with the hot water.

Step 2: Knead the mixture with your hands until you have a smooth dough – preferably on a floured work surface for at least ten minutes.

Step 3: Divide the dough into four parts and form them into small balls of dough and let them rest (covered with a damp kitchen towel) for 30 minutes.

Step 4: Then roll out the dough so that it is only one and a half millimeters thick. Now cut out the dumplings with a round cutter.

Step 5: Stack the dumplings on top of each other so that there is a bit of flour between each layer – otherwise the dumplings will stick together quickly.

Step 6: Once you’ve made all the dough into pockets, it’s either straight on to filling or you’ll need to freeze the dumplings as the dough doesn’t keep for long.

And a final tip: If you want to be a true dumpling pro, you’ll need to divide the pre-made dough so that a small ball is formed for each pocket – and then roll them out so that the center of each sheet of dough is a bit thicker than the edge. This should make it easier to fill the dumplings. However, this method is far more laborious and thus not everyone’s cup of tea.

In addition to the aforementioned bamboo steamer or steamer, which you absolutely need to prepare dumplings (since they need to be steamed), there are a variety of other tools that will make it easier for you to prepare them. Especially if you prepare the dough yourself – a dough roller made of stainless steel or wood can be very helpful here. Unlike the classic rolling pin, this one is better for rolling out particularly thin dough.

If you want to give your dumplings a particularly uniform and shapely design, you can also use a classic ravioli maker set. Although the plastic cookie cutters were originally designed for filling Italian dumplings, they work just as well for making dumplings in three different sizes. Here’s how it works: You cut out the dumplings and place them in the mold, fill them, and close or seal them. form the dumplings by folding the cookie cutters together.