The battery off-road cars Bollinger B1 and B2 were cult before they came on the market. But now the U.S. startup must focus on e-trucks for now.

Bollinger pivots from brilliant off-road engineering to simplest truck chassis. You won’t find more conventional vehicle construction anywhere else. Apparently, the start-up got a little too cerebral and now has to take every opportunity to make money.

The sensational electric off-road cars made by Oak Park, Michigan-based U.S. startup automaker Bollinger are to give way to truck production, at least for the foreseeable future. Thousands of orders for the 125.000 dollars B1 offered in the U.S. will be reversed – the deposits of 1000 dollars each transferred back. Reason is a management decision to put the B models on hold at least temporarily in favor of electric trucks.

The Bollinger B1 and B2 would have had what it takes to compete against electric off-road vehicles such as the Rivian R1S and R1T, the Tesla Cybertruck or the Ford F150 Lightning, but they were considerably more expensive.

For the time being, Bollinger wants to apply his experience with the e-drive to the development of electric trucks in the four U.S. classes from 4.5 to 12 tons. With its batteries in a ladder frame, the trucks with various wheelbases are expected to achieve ranges of several hundred kilometers. The structure can be chosen almost arbitrarily by the customer, as is common in the industry. The 700-volt batteries, the rear-wheel or all-wheel drive and the control system all come from Bollinger.

"Contributing to the green future of the auto industry"

"We have put in countless hours of hard work and passion to create something we are all very proud of", writes Robert Bollinger "Today, however, we are postponing development and shifting our focus to commercial vehicles and fleets. This is a very important step for us, because it allows us to further develop our technology and make a real contribution to the green future of the automotive industry." 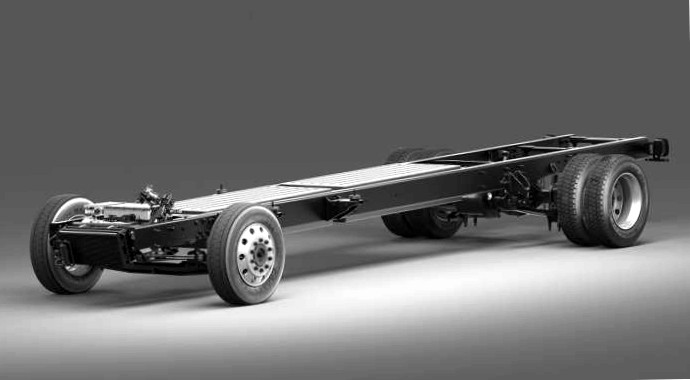 In 2015, Robert Bollinger in Hobart, Upstate New York, had begun developing electric utility and off-road vehicles. In 2017, the start-up was able to present the two all-wheel-drive models B1 and B2 with extremely innovative detailed solutions. Their uncompromising appearance and promised performance additionally appealed to many potential customers.

Edgier than its British role model Land Rover, which came out in the late 1940s as a reconstruction aid and was only given the epithet "Defender" in 2016 The 4.76-meter Bollinger B1 is modern but equally uncompromising: the overhangs are short, the curves are not to be found, similar to a Lamborghini LM 002 or the Hummer H1. For very serious off-road performance, the Bollinger has, in addition to its all-wheel drive, an independent suspension with hydropneumatic suspension and wheel chocks that help increase ground clearance to a lush 38 cm, including other measures.

There are construction machines with richer equipment: The B offers individual seats, a dashboard with three analog round instruments, a few toggle switches and a three-spoke steering wheel. The load length includes the entire length of the vehicle, including the rear-opening frunk; the 5.20-meter-long Bollinger B2 pickup version can fit five meters of cargo with the tailgate closed without sticking out.

Nothing about the retro-charming off-roader hints at its large electric all-wheel drive system. Weighing nearly 2.2 tons, the Bollinger B1 offers an impressive 458 kW and 905 Nm of maximum torque and reaches 160 km/h. From a standstill, it sprints to 100 km/h in under five seconds. The two electric motors on the front and rear axles with two-speed transmissions are fed by a 120-kWh battery, and the range is 320 kilometers. At a fast charger, an empty storage tank is said to be chargeable in about 75 minutes thanks to with 700-volt technology. Also announced was 180 kWh for ranges of more than 500 kilometers.

Strict restriction to batteries and motors

The pictures of the planned truck chassis that Bollinger encloses with his report show that apparently none of the superior off-road technology will be used. On the illustrations you can see conventional ladder frames, with rigid axles on leaf springs, just as commercial vehicles have been built for 120 years. This has cost reasons, is easily scalable in length and load capacity, and is still the most robust and easiest to repair design today. So the know-how Bollinger is talking about will be strictly limited to batteries and motors in such vehicles. Anything beyond that would immediately catapult the young company out of contention. In order to better combine forces, Bollinger has been working "strategically" with truck specialist EAVX in the development of its e-trucks since the beginning of December 2021 together. 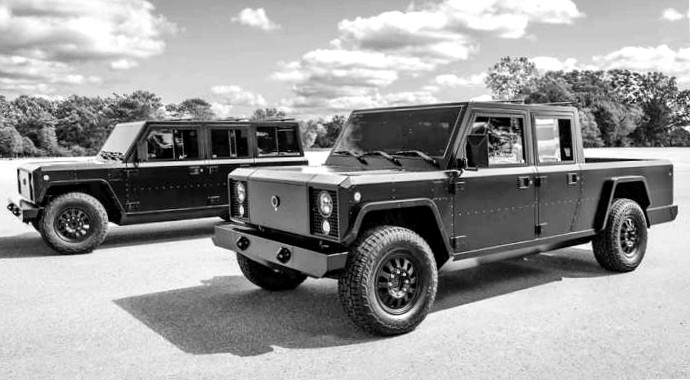 In the meantime, in May 2020, Bollinger had attempted to commercialize the elaborate B development somewhat slimmed down in the commercial vehicle segment, announcing its intention to market its development as a rolling chassis with the technology hardware presented in the B models, including the batteries. It was a chassis with longitudinal beams made of welded tubes, but still with the complete independent suspension for the U.S. category "Class 3 truck", i.e. between 4536 and 6350 kg total weight. Bollinger wrote of "configurations with front- or rear-wheel drive, with or without portal shift hubs, variable wheelbase and up to 180-kWh battery for longer range requirements".

There you could already hear that also technically simplified solutions were thought of. Ultimately, however, even that will have been too expensive for the customers targeted (including the military).

Hope for success and a new schedule "B"

All that remains for potential SUV customers is the hope that the truck business will soon be able to financially support the production of the elaborately designed B1 and B2. Perhaps Bollinger can return to the sensational designs that made the start-up famous. At least they said they would refund deposits until they had a new schedule for resuming off-road vehicle production.

For detailed information on the shipping process and your revocation options, please see our privacy statement.