It is THE PICTURE we have been getting inquiries about for years. It is THE IMAGE that almost every user has stumbled upon at least once! It is THE PICTURE which already belongs to Facebook, just like the "Like" button. It’s about the little boy who supposedly has cancer and it’s the little boy who must be very rich by now, because if you believe the status post, Facebook must have already transferred millions for treatment. It is about this picture. Just yesterday we received countless inquiries about this again. 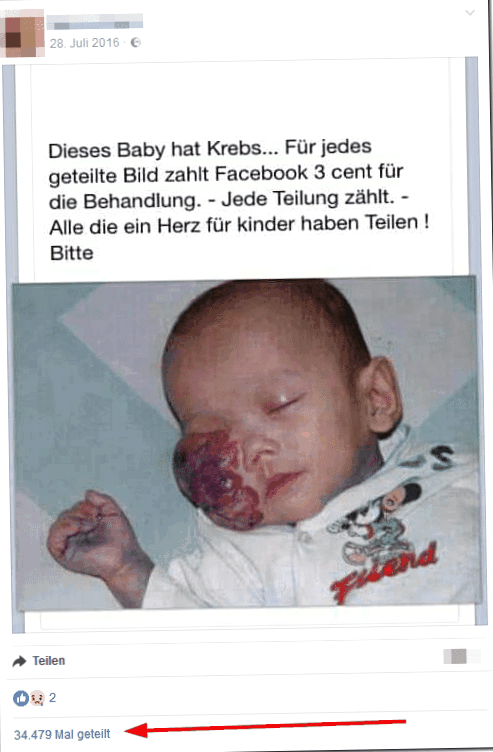 If you click on the number of "splits", you will see that this image is still split every minute! 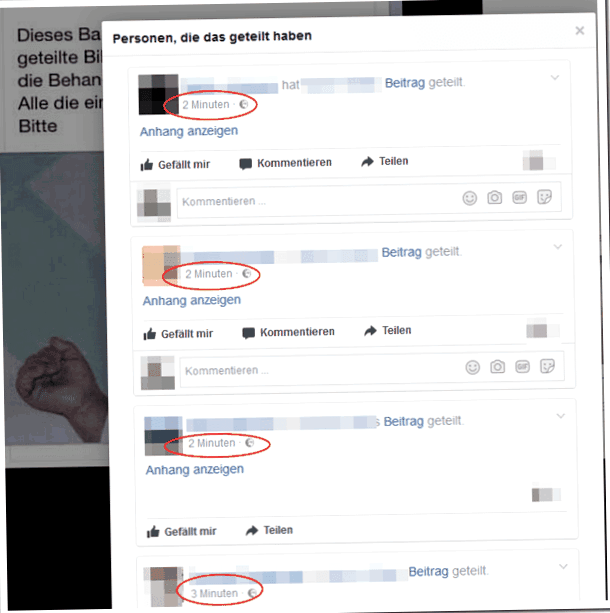 First of all, we would like to mention that it is clear that we always get requests for this picture, because who would not want to help a little boy. At all, when this image was published for it. On the other hand, Facebook gets new users every day and they might see this picture for the first time.

We have been reporting for five years!

In the meantime, we have been reporting on the image and the story behind it for five years now. What discussions we have not always had with users. Many thought that this baby in the photo was already deceased. Allegedly to recognize by the coloring at the hand. Many users thought that it could be just a cancer, others thought it was "just" a blood sponge.

Our research led us to California (USA) and we found out that the boy is SAMUEL acts. A boy from Vietnam adopted by a family in the USA.

It is a blood sponge

Samuel never had cancer. This type of tumor was a vascular tumor which is also called a hemangioma. He had to undergo several facial surgeries and also received laser treatments in 2014. Samuel is now 11 years old and doing well.

How we know all this?

We had the opportunity to conduct an exclusive interview with the affected family in 2014, which we published in 2014 and may now reproduce here again:

(The interview was done in English language. At this point we may publish here the translation)

Mimikama / ZDDK: The photo showing your son has been known to us for a long time. Do you know when this photo was first published?

Hope Ettore: This photo first appeared on Facebook in January 2012. However, we know that this picture has been circulating on the Internet since 2007. I have found it on websites all over the world and I have also successfully downloaded it from sites in Saudi Arabia, Norway, Sri Lanka, USA, etc. have removed.

Mimikama / ZDDK: If you did not put this picture on the net, do you know where the picture came from and who took it??

Hope Ettore: The publisher must be someone from the orphanage in Vietnam, because we (as his parents) are not even in possession of the photo. The photo was taken while he was still in the orphanage .

Mimikama / ZDDK: The photo regularly gets the subtitle that this baby has cancer. Briefly and explicitly for the readers: Is it true that Samuel did not have a cancerous tumor, but a blood sponge??

Hope Ettore: Samuel never had cancer . This type of tumor was a vascular tumor which is also called a hemangioma. He had to undergo several facial surgeries and still gets laser treatments today.

Mimikama / ZDDK: Then we assume that Samuel is not in danger of his life as the picture suggests. How is Samuel doing today?. how old is Samuel?

Hope Ettore: Samuel is now NINE years old and he is doing really well. He has a wonderful character and is doing well in school. All his teachers like him very much and he also makes us laugh every day.

Mimikama / ZDDK: What do they say about Facebook users spreading this photo with untruths to get "likes"?

Hope Ettore: All these experiences were extremely stressful and painful. When you don’t have control over a situation your child is caught in, it puts a lot of stress on you and you feel powerless. In particular, it was very annoying when we saw this image on Facebook pages that abused it to get "likes" and "shares" for their stupid (and often vile) pages. Also, some of the comments that people leave are always just hurtful or rude.
It was also very upsetting that even after months of pleading, Facebook refused to somehow intervene and delete the photo, even though we know full well that they have the ability to do so and are quite capable of doing so.

Mimikama / ZDDK: We are very sorry for this unpleasant situation. Probably Samuel is not unaffected by this either. Does Samuel know that his picture is on Facebook??

Hope Ettore: When he was just seven years old, which is when the picture first surfaced (note: on Facebook), it was truly a difficult circumstance for him to understand what was going on in the first place. He knew that it was on TV and in the newspapers and what it was about, but the attempts to explain to him why these people do it were practically impossible, because the whole thing seems so senseless and bizarre.

Mimikama / ZDDK: This is quite understandable and we hope that with these sentences we can also appeal to the reason of the users. As a final statement, what would you and / or Samuel like to tell those users who post this photo on Facebook?

Hope Ettore: If only these individuals would stop for a moment and use their minds – I mean really use them: Do you REALLY believe that Facebook gives money to sick children for "likes" and "shares"? Does this really make sense?
People often think, "Oh, who’s it going to hurt??"But I can tell you exactly who it hurts: it is the child and the family that suffers from this madness . Behind every photo of a sick child is a story and also a family that is very sad that they are powerless to see their child being used to entertain others. I think people should practice more " social network responsibility " and at least do a little research before sharing ANYTHING. I myself do NOT share ANYTHING without questioning first.

It’s been a little more than two years and this photo is still floating around on Facebook. We gave up the fight after 6 wrenching months of no sleep and resistance throughout. We have hired a lawyer to force Facebook to take out the pictures, but he has advised against suing, as a lawsuit against Facebook in court would ruin us financially. Therefore we have given up. It is difficult to make sense of it all. However, we think that the most important thing is to see Samuel healthy and happy and that he does not have cancer. He lives in a family that loves him and he is developing splendidly.

Thank you very much for helping us. Sincerely, Hope Ettore and family

Thanks so much for helping us. Sincerely, Hope Ettore and Family

Dear Ettore family, ZDDK / Mimikama.at thanks you very much for this exclusive interview and wishes you all a healthy and happy future!

Independent fact checks and research are important and correct. They promote media literacy and education.

An independent and for everyone freely accessible information medium is especially important in times of Fakenews, but also Message Control. Since 2011, we have been striving to provide all Internet users with high-quality fact checks at all times. This is how it should remain in the long run. Therefore we need your support now! At all now, because we renounce from now on annoying advertising banners, because we don’t want to be slaves of the advertising industry any longer and we want to keep this state consciously. There is a good reason for that. This reason is called: independence.