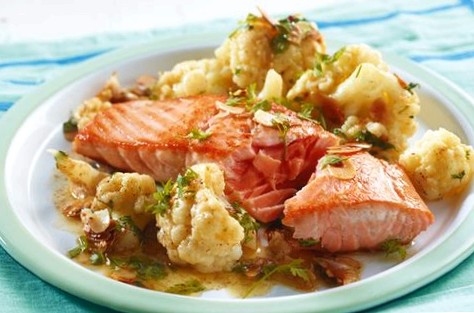 Fish not only tastes good, but with its vitamins, minerals and omega-3 fatty acids, it is also good for our heart, central nervous system and immune system. 1-2 times a week we should eat fish for this reason. To make sure your fish dinner is memorable, here are a few tips to keep in mind when shopping for fish.

How to recognize fresh fish

Tip: Too fresh is also not good. Only after 2 days aroma substances (adenosine triphosphates) form, which provide the good taste. Before that the fish tastes rather bland.

Preparing a whole fish is not as easy for the inexperienced. If you want to be on the safe side, just ask the fishmonger to scale the fish and also gut it.
How to do it yourself: Cut the belly from the anus to the head. Now you can open the belly and carefully remove the intestines. Then wash the fish thoroughly with clean water and then carefully pat dry.

After preparing the fish, it is time to gut and fillet it. The procedure for round and flat fish differs. It is important to use a thin, sharp knife. It should not be too long. If you want to use the whole fish, you need to remove fins and gills before gutting, preferably with a sharp knife.

Filleting round fish
To remove the first fillet, cut along the entire back of the fish along the center bone. The cut should be about as deep as the center bone. You can then remove the fillet from the head end. You can scrape off the hanging belly bones flat with a knife and then cut off the head by cutting into the flesh on both sides up to the middle bone and then breaking the bone through the pressure.

The second fillet is unleashed in a similar way to the first one. On the other side, also cut along the middle bone, and then detach it from the flesh together with the tail.
Finally, to remove the skin, lay the fish on its skin side and cut a narrow strip of flesh over the skin, then pull the knife between the skin and the fillet.

Fillet the round fish

Filleting flatfish
Lay the fish on its side without eyes and cut the fish with the knife above the eyes along the fin seam around the head to the depth of the middle bone. To remove the back fillet, cut the skin along the fin seam, lift the fillet and pass the knife flat between the bones and fillet. Remove the belly fillet as well. The fillets on the other side are released in the same way. Remove the skin as for round fish.

Tip: Be sure to detach the meat from the fish cheeks as well, it tastes especially good on almost all fish. 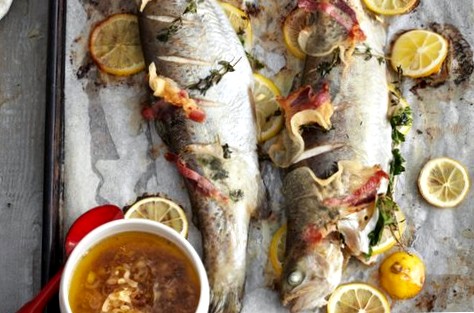 Crickets
A particularly low-fat method of cooking fish is grilling. The temperature should not be too high, otherwise the fish may be brown on the outside but still raw on the inside. The fish stays nice and juicy when it is wrapped in aluminum foil and put on the grill. Steaming
Steaming is very gentle on nutrients and also low in calories. The fish is cooked in steam and loses none of its delicate flavor. Since it does not need to be turned over, the fillet is well preserved.

Tip: put fish in the steamer together with herbs – so it takes on a delicious delicate herb aroma.

Steaming
When steaming, the fish is cooked in little liquid. This method also preserves nutrients and saves calories. Roast
Fried fish tastes juicy and delicious. It should not be too brown, then it tastes dry quickly. Stewing
When braising, the fish is first seared and then placed together with liquid in a pot or casserole dish and steamed on the stove or in the oven. Here it can absorb the flavor of the sauce well and remains nice and juicy.
Frying
Fried fish contains a lot of fat, because it is fried in hot oil, but it tastes so delicious that the calorie sin is worth it. Make sure that the temperature is not higher than 180°C, otherwise the fish will quickly be crispy on the outside but still glassy on the inside. Fish should also only be fried with a breading, otherwise the meat will quickly fall apart.