I got this earworm while reading the story of the well-known and dreaded restaurant tester in Stevan Paul’s Monsieur, the lobster and me. Stories of cooking, each assigned a recipe.

The Fritto Misto, which Mr. Siebeck was served as an intermediate course, appealed to me spontaneously and all the ingredients were in the house. What is right for Siebeck is cheap for Kochpoetin.

By the way, in the story, the chef almost failed because of a La Rat potato that was not cooked perfectly. Of course I didn’t have them there, but a franceline did the trick.

Elated we went to work.

For the Fritto Misto:

I steamed the potatoes in their skins in approx. 20 minutes cooked. Mr. H. prepared the vegetables. I first sweated the onion until translucent, it should not take color, and then added the remaining vegetables and the rosemary. After ca. 10 minutes it was cooked, but still had a bite to it. I seasoned with salt and pepper, put a lid on the pan and parked it in the 50°C oven.

For the tuna mousse: 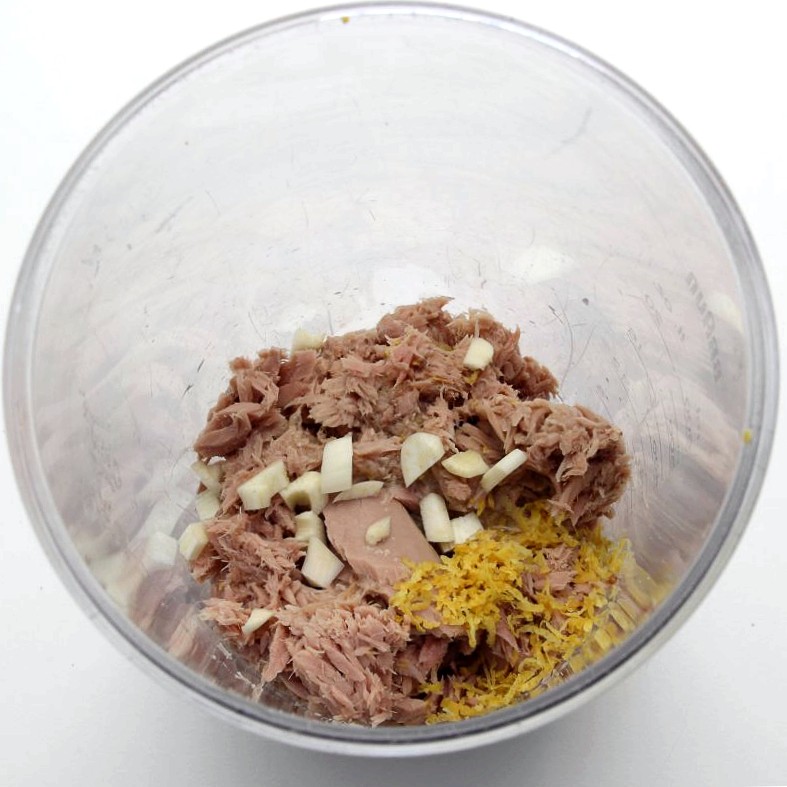 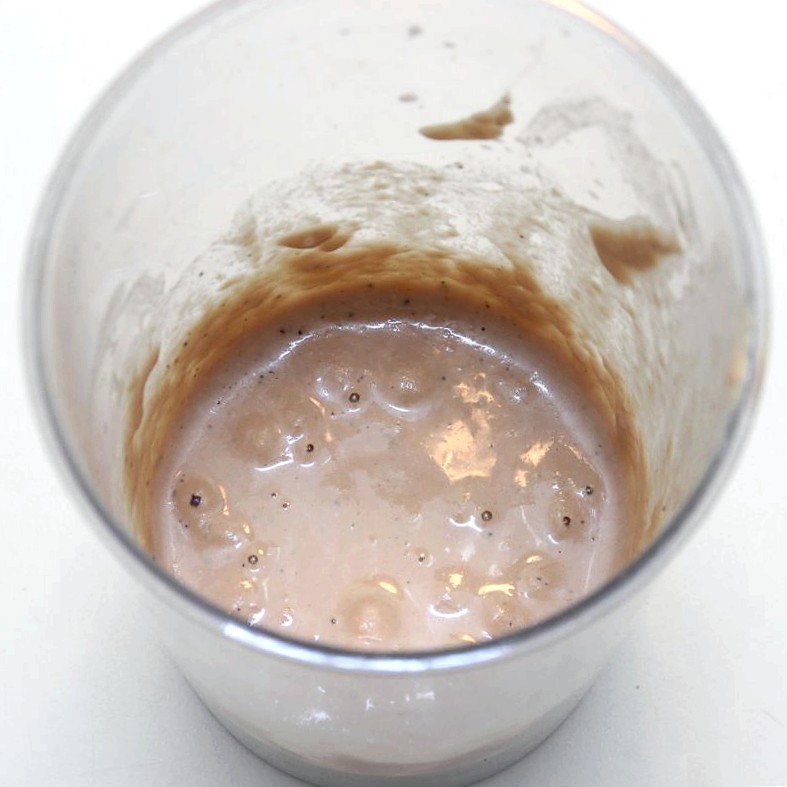 I put the drained tuna with mustard, garlic, olive oil, lemon juice and lemon zest in a tall measuring cup and pureed the whole thing. Then I added the broth peu à peu until a loose, frothy mousse was formed. Mr. H. had in the meantime, at my request, made a simple salad of cucumber, tomatoes, feta and onion, which I think went well with it. I peeled the hot potatoes and arranged everything on plates. 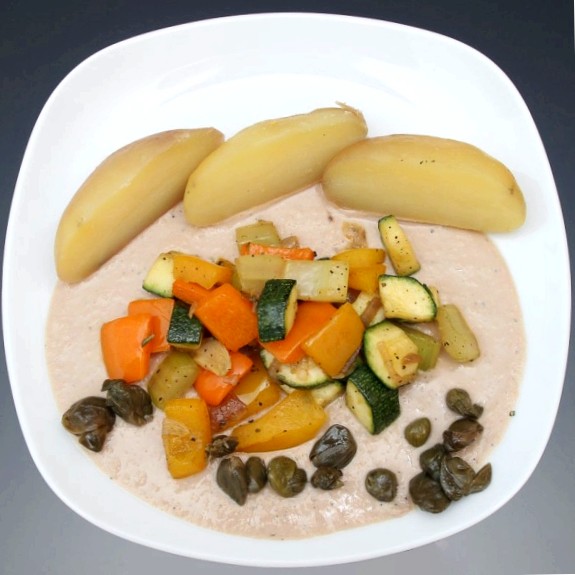 Conclusion: A quickly made, delicious dish, which absolutely convinced us in terms of taste. A nice composition of flavors, though the same cannot be said for the colors. I doubt that a top restaurant would present a mousse of undefinable color, no matter how delicious it tastes, to a tester, because as we all know, the eye eats with you. And I don’t know how the dish could have been presented in a more appealing way. 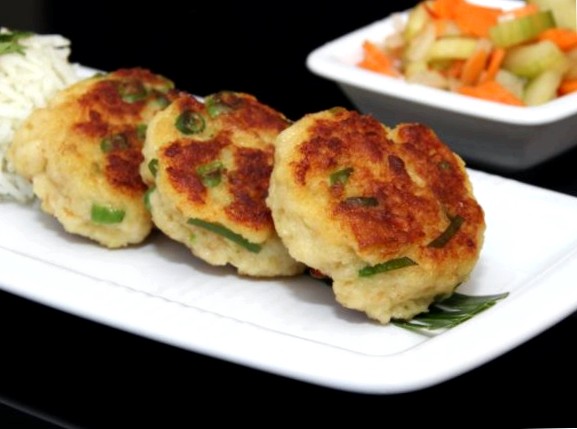 I have since a few weeks so many cookbooks as a guest, that I sometimes stand in despair in front of the fridge in the early evening and absolutely do not know what I want to cook. Fortunately Mr. H. stukturierter inclined and marks me dishes that he would like to eat, with small white slips of paper. One stuck on page 34 with the Fish cakes with green beans**. And since I just had a promising green rice, whose brochure said it was a perfect companion for fish dishes, from Dorothee bushcook (thanks again!) had been sent to me, which I absolutely wanted to taste, I decided to try the fish cakes. 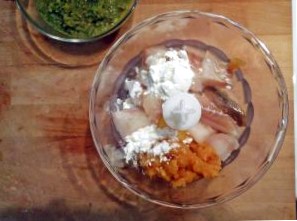 I processed the ingredients for the chili paste with a magic wand to a smooth paste and put it in the blitz chopper with the other ingredients, except for the bean slices. After short chopping gave a still quite moist mass. Mr. H. I thought that it would certainly not make a cohesive ball, so I added 1-2 tablespoons of freshly shredded breadcrumbs with the bean slices. In the cookbook, the fish cakes are served with a cucumber relish and rice.

For the cucumber relish: 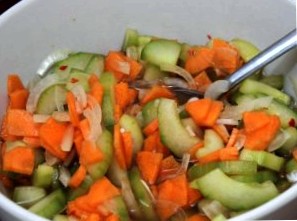 I boiled the vinegar with sugar and salt briefly until they had dissolved. Mr. H. cut in the meantime filigree vegetable pieces. This division of tasks crystallizes more and more. Our demands are simply too different. Last week he came home in the evening, examined the vegetables I had cut and said with a wink, shaking his head, "You could have cut that finer".

After the vinegar mixture cooled, I poured it over the vegetables and let it sit, stirring occasionally, for a good hour. 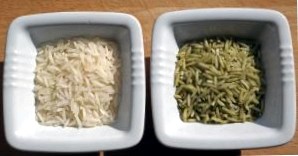 While Mr. H. I fried the fish cakes carefully in hot peanut oil, then I took care of the rice. On the left of the picture is my usual Tilda Basmati rice, on the right is the Green Bambo rice. Visibly green before cooking. I put 100 g with 200 ml of water in my rice cooker. He cooked it for me. When I lifted the lid after 40 minutes, the disappointment was great. It was almost as white as normal basmati rice. Well, I thought, it will surely taste very fine, since it had been given "a tart, fresh aroma by enriching it with organic bamboo tea extract". At least that’s what the beautifully designed glossy brochure that came with it promised. 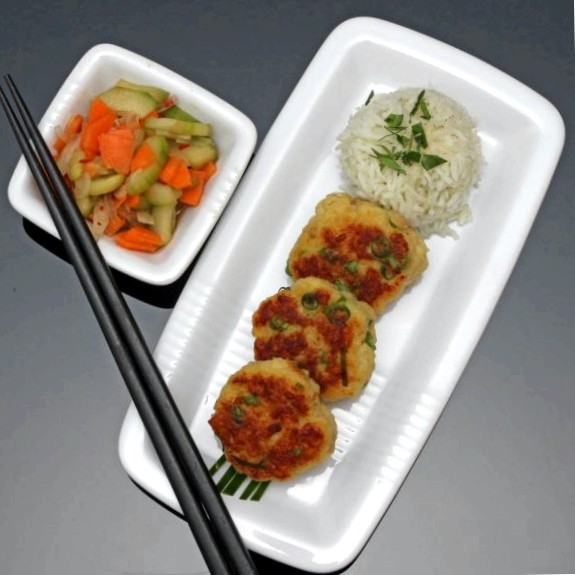 Conclusion: fish cakes and relish tasted sensationally good to us, although Mr. H. the spiciness was a bit of a problem. And the rice? It tasted like basmati rice. Mr. H. said that since he knew it, he could taste a delicate bamboo note in the background. I didn’t notice it (and Andy from lieberlecker seems to have felt the same way). My normal basmati rice tastes much better to me. It smells so intense that its scent still delights me the next morning in the kitchen. 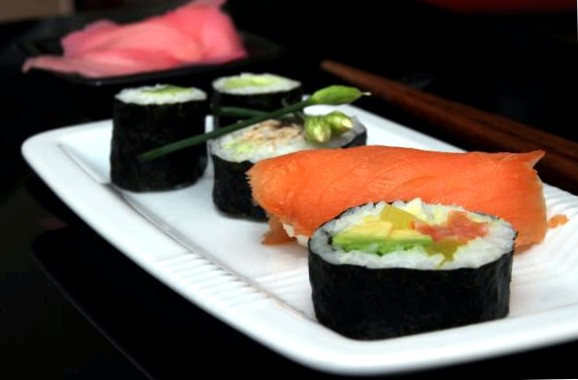 I actually first learned about sushi four years ago in Ôsaka and have enjoyed it in many other places in Japan. It tasted so infinitely good to me in all variants that I wanted to make it myself at home, of course. The bar was high and the first attempts were still quite clumsy. This was my first. Not only lacked the appropriate utensils for serving. Again and again I borrowed Japanese cookbooks, tried around, read blogs and peu à peu I began to understand the principle of sushi (rudimentary). The most important thing is the rice, because it makes up 90% of the sushi. Not just any rice, but ideally the best Japanese sushi rice with as little breakage as possible. Before I recently came across Mari’s article on rice, I had no idea how many different types of rice there are in Japan for different dishes. Unfortunately I still have 2 kg of shinode that I will use up before I buy finer sushi rice.

Before cooking, I washed the rice by barely covering it with cold water in the bowl of the rice stove and immediately poured the water out again. After that I drove through it with my fingers like a rake. I repeated this process three times, depending on how much turbidity was left in the water. After that, I washed the rice three more times until the water drained off reasonably clear*. After washing, I added the cooking water and let it stand for at least half an hour, better an hour.

For the sushi vinegar:

I stirred this mixture with a whisk until sugar and salt dissolved. This took approx. 5 minutes. The rice boiled once in my rice stove and simmered for a few minutes (20 minutes from cold to off). Then it turned off and I let it rest for another 20 minutes. 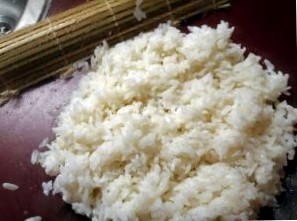 Then I put it in a bowl (traditionally made of wood, actually…), poured the vinegar mixture over it, and ran a moistened wooden ladle through it crosswise and lengthwise until a slightly sticky, homogeneous mass was formed ("cutting rice"). Then the sushi rice was allowed to cool while cutting the inserts covered. Since I don’t have a fishmonger within walking distance from whom I would buy raw fish in sushi quality, I used canned organic salmon and organic tuna.

The cucumbers were for the "kappamaki", which I usually start with. I put rice on the halved nori sheet with a dampened spoon and pressed it gently (you can also do it by hand, but I don’t feel that confident yet). At the back end remain ca. 2 cm free. Then I put a narrow strip of wasabi on the rice and arranged the cucumber strips lengthwise on it. For the rolling the following picture is helpful.

I did the same with the other two rolls. For one, I placed salmon strips, avocado and radish together. 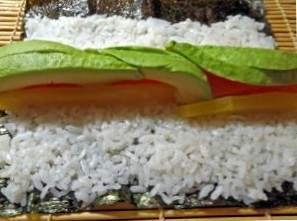 For the second roll I stirred a rather solid paste of tuna, crème fraîche and Thai chives.

By the way, the free end of the nori leaf does not have to be moistened or glued. It is enough to let the rolls rest for a few minutes with the cut side underneath! Using the leftover sushi rice, I carefully formed four oblong rice balls (nigiri) with my left moistened hand, placed a dot of wasabi on top and topped with the salmon slices. That was all. Actually quite simple.

To serve, I cut the rolls into six or eight slices, depending on the thickness of the roll, with a sharp knife that I kept moistened, and put some soy sauce (Kikkoman) and pickled sushi ginger in bowls. I have made pickled ginger myself before, but it was too coarsely chopped. With the bought one you should look for one as additive-free as possible. Mr. H. opened the apartment door and expressed delighted, "Hmmm Sushi, then spring will now finally come.".

Conclusion: I always find that there is still an infinite amount to learn about sushi (*thanks, Mari!) and I am pleased that I can make it acceptable for my western palate. If you keep in mind that the rice plays the main role in this dish and give it the necessary attention, good sushi is quite possible.