Codeine intoxication Germany’s new drug? Why so many rappers are suddenly on cough syrup

Hamburg rappers Bonez MC and Gzuz from the 187 Strabenbande do it. The Berlin rapper Ufo361 also. Even the rapper Haiyti, currently celebrated by many media: they all make codeine the subject of their songs.

Codeine is an opiate that the average consumer knows as a remedy for irritable coughs. It is, according to doctors and pharmacists, primarily also. "It is prescribed against or for moderate pain", says Ursula Sellerberg, press spokeswoman for the German Federal Chamber of Pharmacists. In German rap, however, the drug has become a narcotic, and artists like Bonez MC and Ufo361 make no secret of that on their Instagram profiles. In their stories, they regularly show how they take codeine in combination with Sprite.

Glorification of intoxicants in hip hop is not new. Street rap in particular has always had a penchant for documenting the use of drugs in lyrics: whether it was Cypress Hill in the early 1990s with "Hits from the bong" or the "Hits from the bong" in the early 1990s or last year Miami Yacine with "Kokaina". Nevertheless, the question arises why rappers suddenly drink lemonade with cough syrup. Where does this trend come from? How dangerous is it? And how much can it influence the largely young listeners?

Anyone who knows the founding country of hip hop can guess where the trend of drinking cough syrup with lemonade also comes from: the U.S. There codeine is discovered as an inexpensive party drink as early as the 1960s in Texas. Soul and blues musicians abuse the opiate. They first mix the cough syrup with beer. A new narcotic is born – more and more musicians consume it. At the end of the 1990s and the beginning of the 2000s, the group Three 6 Mafia promoted the drug with their song "Sippin on some Syrup" known nationwide.Codeine becomes hip hop’s new source of inspiration. Only the preparation changes a bit over the years. Instead of beer, the prescription cough syrup is now consumed with lemonade (in most cases Sprite) and crumbled candy. It turns purple in the process, which also gives the drink one of its many names: Purple Drank (other names include Lean, Sizzurp, Syrup, Texas Tea).

Nothing changes about the intoxication when lemonade is added. It’s still strong, explains Rainer Thomasius, the medical director of the addiction department for child and adolescent psychiatry at the University Medical Center Hamburg-Eppendorf: "The opiate releases a lot of dopamine (a feel-good transmitter), Anm. d. Red) is released in the so-called addiction memory. This makes for strong euphoria. At the same time, however, sedation, or calming, takes place."

This is precisely the desired effect of codeine intoxication. The consumption can have however serious consequences, warns Thomasius. "The biggest problem with codeine is that it affects the central nervous system", says the physician. "This leads to central respiratory depression. Normally, in such a case, a pain reflex would arise, which would stimulate breathing again. Because the pain receptors are occupied and influenced by the opiate, however, reflex stimulation does not occur. This can cause respiratory arrest in the event of an overdose."

In addition, each person reacts differently to opiates. For example, according to the doctor, five percent of all people are so-called fast metabolizers. For them, the morphine that the liver filters out of codeine is released faster and more intensely. So they can get a respiratory arrest much faster and with much smaller amounts. The opposite of this are the so-called slow-metabolizers. In their case, the morphine is released much more slowly. That is, they hardly react or only react to much larger quantities.

So the risk of dying from codeine abuse is not small – and there are already prominent victims. A$AP Yams is one of them. The founder of the hip-hop collective A$AP Mob, which includes the well-known rapper A$AP Rocky, died in 2015 at just 26 years old. As later revealed by a spokesman for the medical coroner, a codeine overdose was the cause of his death.

Rapper Lil Wayne is also heavily addicted. He already admitted that openly in an interview in 2008. The 35-year-old has even had to spend several days in hospitals because of it.

But these cases apparently do not have a deterrent effect. Through artists like Moneyboy, Bonez MC or Hustensaft Jungling, the codeine trend is now also established in the German rap scene. Musicians are not shy about their affection for cough syrup in public. The youngster in particular regularly mentions the opiate in his songs: "I need codeine, because I’m addicted to the goddamn medicine" he raps in his eponymous song "Codeine".He also talks to us on the phone about his consumption in a completely relaxed way – as if it were the most normal thing in the world: "I drink this because it’s the nice American drug, says the musician. "Lil Wayne is the main culprit." But he is well aware of the risks, he asserts: "You shouldn’t take the stuff too often. It is an opiate, after all. That is dangerous."

But how does he get hold of the cough syrup in the first place?? After all, the in Germany is available only on prescription. That’s very different, says the rapper: "There are different regulations in the EU in the countries. In Switzerland, for example, it is available without a prescription. Besides, you can also order it from France – in online pharmacies", so the 20-year-old. When we tell Ursula Sellerberg, press spokeswoman for the German Federal Chamber of Pharmacists, about it, she immediately becomes skeptical. "If you order anything on the Internet, there’s a big chance it’s a counterfeit drug", she says. "Prescription drugs are only legally available if you have a prescription. If you order it somewhere in Hong Kong, Dubai or France and you don’t have to present a prescription, there’s no guarantee what’s in it."

Actually, there is no codeine problem in Germany – or is there??

So if the consumption is not without risk – why do rappers then reach so carefree to the opiate? "Because it is an important source of inspiration for my music", says cough syrup young man. "The impressions are much stronger. That is, one feels everything much more intensively. I can make much more melodic and harmonious songs because of it. You can also hear that in my new album ‘The first rapper with a high school diploma’." Still, just getting the codeine-containing cough syrup seems to be a real challenge. 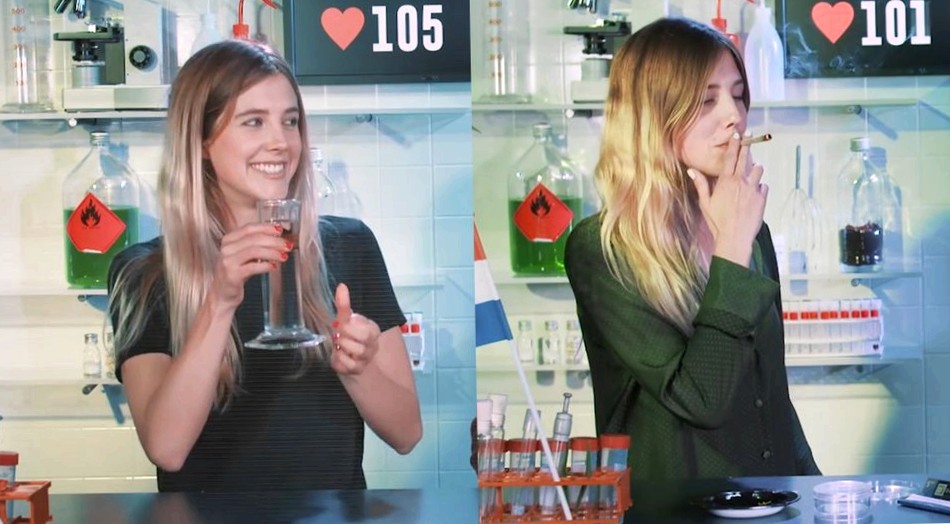 But how high is the number of consumers actually? When we ask the press office of the Federal Government Commissioner on Narcotic Drugs whether there has been a conspicuously high level of opiate abuse in recent months, they are surprised: they know nothing about such cases, they say. The only thing they send us are figures from the "Jahrbuch Sucht 2017". According to them, there are an estimated 1.9 million people addicted to drugs in Germany. How many of them are addicted to codeine is not known, authorities say.

However, Rainer Thomasius estimates the number from his daily work in the addiction field as rather low. Among young people, he sees more of a problem with opioids than with opiates. "They have a higher potency and can therefore also set stronger effects", says the doctor. The biggest difference between the two substances, which are largely used in medicine as painkillers, is the production. While opiates are derived from opium poppies, opioids are either fully or semi-synthetically produced.

In the U.S., however, the Purple Drank is already a serious problem among teenagers, as a recent survey, from which BR quotes, among teenagers in North Carolina showed. According to the survey, a third of respondents have already experienced codeine. However, you can’t compare the countries with each other, says Thomasius. "In contrast to their American counterparts, German doctors are more guideline-oriented. Here, drugs are very rarely prescribed, which in turn leads to less dependence."

The numbers prove the expert right. Although the number of drug-related deaths in Germany rose from 1,200 to more than 1,300 in 2016 compared to the previous year, according to the Federal Criminal Police Office (BKA). This includes all those who died from psychoactive substances such as opioids and opiates. But that is out of all proportion to the U.S. There, according to data from the "New York Times" died in the same period more than 65.000 US citizens. Of course, you have to keep in mind that America has about four times the population of Germany. Nevertheless, the death toll in the United States is 40 times higher. Not for nothing did US President Donald Trump declare a national state of emergency in August last year because of this.

Do musicians have an impact on the death toll?

A big part of the blame for this goes to the pharmaceutical companies, who promoted these drugs in the 1990s as the new all-purpose weapon against chronic pain and got doctors to prescribe them more often. This means that the influence of the pharmaceutical industry and doctors is immense and probably much higher than that of musicians.

But their role should not be underestimated either, says Thomasius: "Musicians have an important role model function and have a very strong mediating effect on typical youth scenes. In this respect, it’s a group that young people look to for guidance. That’s why I think it’s a problem not to be underestimated when musicians offer to the outside world that codeine in combination with fizzy drinks produces good feelings."

Cough syrup Jungling sees things a little differently than the addiction expert – he rejects any complicity. "I wouldn’t underestimate people either", he says. "I don’t think my fans are so naive as to do everything I do. They’re already figuring themselves out. That’s the same as saying all alcoholics are just alcoholics because they saw alcohol being drunk in movies. I won’t be blamed for it."

In the end, however, the abuse of cough syrup here in Germany seems to be more a scene thing of rappers who have been inspired by their role models and influences from the U.S. This is supported on the one hand by the statements of drug commissioners and experts who know nothing of codeine abuse, and on the other hand by the fact that obtaining the opiate in this country is still a real challenge. Presumably, this will not change for the time being – at least as long as other legal and illegal drugs are easier to obtain. Still are thus "only" or say especially the rappers on cough syrup.