The cultivation of saffron

Saffron is taken from the flowers of Crocus Sativus (Iridaceae), commonly known as saffron crocus. It reproduces through its own tubers. Each tuber forms new tubers, with which the plant multiplies. Saffron flowers appear in the fall and are harvested for the red stigmas, which we all know as saffron threads and from which the spice is derived. Each flower achieves 3 stigmas and is picked carefully by hand. The flowers must be harvested before noon, because they wither quickly. This process is laborious and must be carried out meticulously. This explains why saffron became so valuable and it is called red gold.

The saffron crocus is grown in countries such as Iran, India, Afghanistan, Italy, France, New Zealand, USA, Spain, Portugal, Greece and Morocco, Turkey and some parts of China. Since the plant is propagated in different parts of the world, the cultivation methods may vary, depending on the climate, soil type, depth of cultivation and distance between tubers.

Crocus Sativus grows in a variety of soil types, but does best in calcareous, humus-rich, well-drained soil with a pH between 6 and 8. Saffron tulips can also be grown in dry or semi-arid soils, but be aware that you need to be able to irrigate the land during the August and spring droughts. If you plant saffron tubers in wet or semi-wet soil types, be sure your land is well drained during periods of wet weather to protect the tubers from rotting or possible infection.

For the cultivation of saffron we expressly need a climatological summer and winter with temperatures not exceeding 35°C to 40°C in summer and about -15°C to -20°C in winter. Therefore, saffron can be grown in dry, temperate and continental climates, but not in tropical or polar climates. 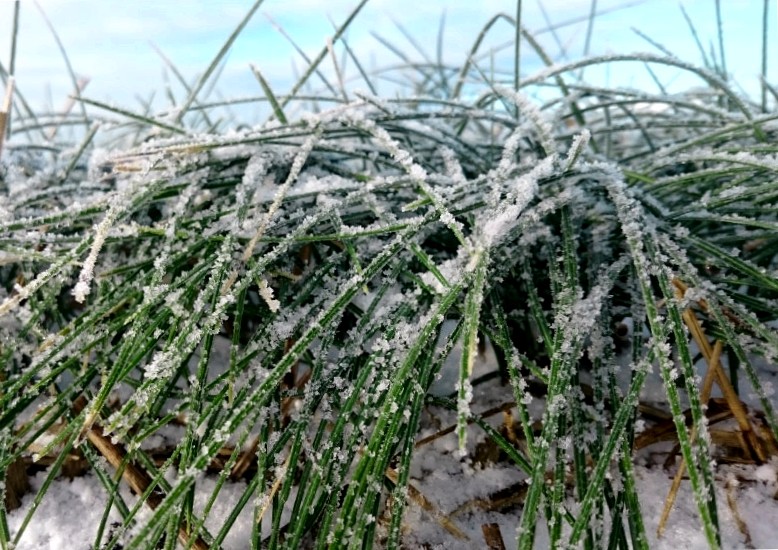 Since Crocus Sativus is a heat tolerant plant, dry and hot summers will not be a problem at all. However, in extreme winter temperatures it is possible that the leaves freeze, which means that the saffron tubers develop less well and therefore flower less and give less saffron.
If extreme frost threatens the soil, it is wise to cover the plants with straw or fiber cloth for protection until the frost has subsided.

During dry weather conditions in the spring time, watering is essential. Rainfall is abundant during this period and is considered good for tuber development, as it produces higher yields of flowers and the next generation of tubers.

If you are growing saffron bulbs for the first time, choose an unused piece of land so that no other plants or saffron bulbs have been grown there before (if not, at least not in the last 10 years). Before you start planting, it is advisable to work the soil 20 to 50 centimeters deep and leave the planting bed loose and well aerated. Add biological fertilizer during the process. The type of soil in Spain needs these preparations quite particularly. Planting tubers on raised beds is ideal to allow for good irrigation and drainage. Watering should be as minimal as possible until the tubers begin to form roots. Planting is done in July, August and September, either by hand or by machine. Harvesting then takes place at the end of October to mid-November, about 8 weeks after planting. Saffron crocuses need a lot of sunlight, so it is important to plant them mainly in open fields than in the shade.

Generally speaking, the tubers are planted between 10 and 20 centimeters deep in the ground. The deeper they are planted, the less they will multiply, the smaller the harvest will be, but the higher the quality of the flowers will be.

Look at the "row system" when planting tubers. Each row is ideally 15-20 centimeters from the other. Dig a first row and put in the saffron tubers. When you dig the second row, use the soil to cover the first row and so on. Rows should be raised a little for drainage and aeration. Form a block from the rows and leave enough space for a path to walk between each block so that it is easier to move between saffron fields as they need to weed, irrigate and later harvest them. 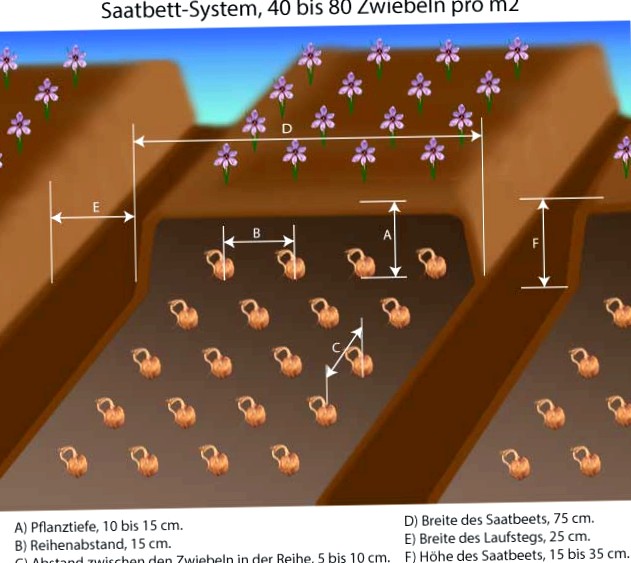 The distance also depends on how often a grubbing is applied. The term grubbing refers to the complete removal of the saffron tubers from the soil to separate the mother tubers from the daughter tubers that have formed, so that they can be stored for the next planting season. For a biennial grubbing, a spacing of 5-10 centimeters between each tuber is needed; for a longer period, make a 10-20 centimeter spacing.

Protective measures must be taken against birds, rodents and rabbits. Tuber rot, leaf rust, nematodes and other pathogens must also be prevented from attacking the saffron crocus.

Saffron flowers begin to bloom in mid-October. This phase lasts about 3 weeks. Within this period, an intense flowering phase, also called "mating days," occurs, which lasts for 2-6 days. Flowers that appear overnight must be harvested at dawn the next day (and before midday) to avoid wilting the flowers. It is best to strip flowers that are still "dormant" or still closed to ensure best saffron thread quality.

Distance of the saffron

When the flowers are harvested, they are taken to the "stripping" area where the stigmas or filaments are carefully and meticulously separated by hand. The white and yellow parts of the stigmas are not included in the cut, only the red parts.

After the stripping comes immediately the drying, also called roasting. This process is carried out daily until the last threads are dry. Since the threads are extremely moist, the harvested stigmas are dried out by roasting at a temperature not exceeding 60°C. Extreme care must be taken to avoid overstressing the threads during the process. Thus, the "roaster" (i.e. the person assigned to the task) has a very delicate function in the production of high quality saffron. After roasting, the stigmas will have reduced their size and weight to about 20% of their original dimensions. Five kilograms of fresh stigmas will yield just 1 kilogram of dried, bright purple threads.

The stigmas can also be dried over hot coals or in an oven. Spread the fresh threads on a grid with baking paper and place it in the center of the oven. Increase the heat to 60°C, watch the threads very closely for 10-20 minutes until they are dry enough to separate from each other. For drying larger quantities, saffron threads are placed in a special room at 30°C to 35°C for 10-12 hours. A more modern method is to use a dehumidifier with a set temperature of 48°C for 3 hours. The length of time, or so it seems, depends on the amount of threads to be dried. But most importantly, the threads should not be dried for too long, as this reduces the quality and price of saffron threads.

When the threads are dried, they become bright dark red in color. The tips are dark orange in color. They are cooled, wrapped in tissue or foil and placed in airtight containers, covered and left in a cool, dark area for at least 30 days before they can be released for use. You can leave the threads like this for up to a year. The quality will then still be good enough for food refinement.

The tubers of the saffron crocus can be used for 4 years. In the 5th year they must be dug up. In Spain and Italy, weeding takes place between June and July. In Greece, this is done between May and June. Once the saffron leaves turn brown and wither, the tubers go dormant and are now ready for uprooting.

The fields are plowed using a hoe or a plowing machine and the tubers are then collected manually. The tubers are then cleaned of weeds and unwanted components so that the new planting material can be classified according to size. The tubers must not be exposed to the sun for more than a few hours. Then store these sorted tubers in a dark, dry but well ventilated place until the next planting season.

Removing weeds requires tedious manual procedures, especially if you are dealing with roots. Weed removal by machine can be done, but the risk of damaging the tubers in the process is very high. That is why most farmers prefer it over the traditional way. The longer the weed remains in the saffron bed, the more difficult it will be to remove it. So it is better to deal with the weeds as early as possible. When the saffron leaves have wilted but it is not yet time to pull the tubers out of the ground, remove the brown leaves to make it easier to spot the weeds.

Saffron bulbs go through the stages of activity, transition and dormancy. The active season begins when they are planted and they develop roots, shoots, leaves and flowers. The transition phase takes place when the tubers become mother tubers and produce new tubers (daughter tubers). The dormancy begins when the tubers reach an advanced stage and no longer produce new tubers. The dormant state is characterized by withered leaves and dried roots. The tubers need to be dug up and left alone for some time before they are transplanted and become productive again.

As far as the planting area is concerned, it is extremely ideal to let the saffron fields "rest" for some time (for at least 12 years after a harvest cycle has been maximized) in order to renew themselves. It is best to go to an unused field or a recovered field to start a new cycle. This will ensure a robust planting, which will give a good yield in.

The tubers are sorted according to size. Quite obviously, the size of the tuber will determine the yield. A study by a university in Turkey concluded that the larger the mother tubers were, the more daughter tubers they produced, and the higher the yield of flowers and stigmas was. It has also been shown that the regeneration of tubers decreases significantly over the years. The study also recommended planting smaller tubers in unused fields to help them grow large.