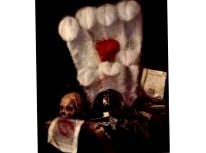 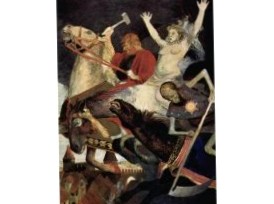 The Baroque period is strongly influenced by the Thirty Years’ War and the rise of absolutism. The Thirty Years’ War on the one hand led to epidemics, famines and plundering; in some regions the war cost the lives of up to 2/3 of the population. This fine line between foreboding death and hope is reflected in the Baroque period. On the other hand, absolutism gave rise to a stronger awareness of the estates, a clear division between the nobility and the bourgeoisie. In addition, most of the Baroque authors were deeply influenced by Christianity, so that their works oscillate between religious mysticism and secular lust for life and fear of life. The religious anchoring and the belief in life after death and redemption also led to the motto Memento Mori (Remember the death).

These contrasts also led to a very changeable, difficult to unify creative pool in the Baroque period. The German Baroque is also considered incomparable with the Baroque epochs in other countries and occupies a special national position. Even when it comes to the epochal classification of the Baroque, there are very different opinions, since today’s view of the Baroque probably differs greatly from the self-assessment of the time. In terms of language, Baroque poetry is often perceived as turgid and turgid. 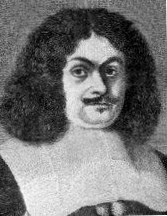 The life of Andreas Gryphius is marked by the sufferings of the Thirty Years’ War, the destruction of his native town Glogau (today’s Poland) and by the early loss of his parents and siblings.

Already with ca. At the age of 5 and 12 Andreas Gryphius lost his father and then his mother. He came into the care of a stepfather, but due to the expulsion of the surrogate father, Gryphius then quickly made his way to Driebitz (today’s Poland). He was able to graduate from high school in Gorlitz and studied at the Akademische Gymnasium zu Danzig. He then moved to Silesia and East Prussia as a tutor to the Schonborners family and was able to travel through the Netherlands with two sons of the family.

His brother Paul and his sister Anna Maria died within a short time, Andreas Gryphius himself was seriously ill. He then stayed at the University of Strasbourg and then moved back to his hometown Fraustadt, where he met his wife Rosina Deutschlander, with whom he had 7 children.

Gryphius was in 1662 by William IV. from Saxony-Weimar to Fearful society and was given the name The immortal Awarded. 2 years later Gryphius died of a stroke. 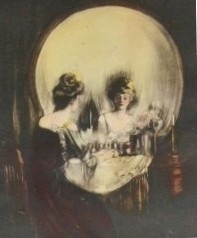 Charles Allan Gilbert, Everything is Vain (1892)

The poem "Es ist alles eitel", written by Andreas Gryphius in 1637, is a sonnet 1 that deals with the transience of all earthly things, i.e. the idea of vanitas.
As an interpretive hypothesis, it can be stated that the author is trying to make clear that everyone is running toward the afterlife, whether rich or poor.

The sonnet is divided into four stanzas, the first two of which consist of four verses each, i.e. two quartets, and the last two of three verses each, i.e. two tercets.
In the first stanza Andreas Gryphius addresses the decay and destruction of cities. In the second stanza he also deals with the theme of transience and the destruction of all that is beautiful.
The third stanza, the first tercet, on the other hand, raises the question of what life actually is and how mankind copes with it. Thus the second tercet, i.e. the last stanza, gives a concise answer to that.
This is very negative and concludes with the conclusion that no one is concerned with what is really created for eternity. A lyrical I is not interested in this poem; readers are addressed exclusively in the second person singular. The meter 2 of the poem is a six-beat iamb, so that it can be spoken of as an Alexandrian. Thus, each verse is 12 or 13 syllables and there are alternating feminine and masculine cadences. The rhyme scheme is abba-abba-ccd-eed, so it corresponds to the pattern of an embracing rhyme, as well as at the beginning of the first tercet to a couplet rhyme (cc).

The first stanza is immediately introduced with a personal address ("Du[. ]") and, directly following the heading, deals with the "vanity on earth" that cannot be overlooked ("You see where you look [. ]"). The two following verses are antithetical and want to say that the beauty is only short-lived and that it ends at any moment. can be broken. Thus, in verse two, the two words "today" and "tomorrow" are positioned in opposition, and the third and fourth verses are ended with the future tense ("Where [. ], will [. ]", "[. ] will play [. ]"). Through the verbs "to build" and "to tear down" the concept of destruction becomes clear and an association with war is brought about. The second quartet is again introduced by an antithesis, which speaks of the transience of all splendor ("Was itzund prachtig bluht, soll bald zertreten werden."). The verb "trample" here again speaks for war, which is also a negative process. The sixth verse, like the previous verse, begins with the word "what" and is also continued as an antithesis, so that this anaphora 3 can be seen as an intensification. "Was itz so pocht und trotzt," meaning whoever is so haughty now "will be ashes and bones tomorrow.". This is another allusion to the idea of vanitas, as well as the meaning of memento mori, since ashes and the single body part "leg" can be related to war, decay, and destruction. The first part of this sentence, which addresses the arrogant among the population, i.e. the principalities, is in this case attributed to the process of perishability, with which the author states that all will die, whether they are poor or rich. This statement is supported with the next, i.e. the seventh verse, in which with a doubled negation nothing is declared as eternally existing. The expression "Nothing is [. ] no [. ]" is supposed to provide clarity about the transitoriness of everything earthly and is supported with the enumeration resp. Hyperbole 4 ("no ore no marble stone") in the same verse (V. 7) clarifies. The last verse of the second quartet is introduced with a personification 5 of happiness ("[. ] happiness laughs [. ]"), which, however, is not of long permanence, as it is displaced by complaints that "thunder" (V. 8). This further personification ("thunder the complaints") reinforces the association with war and violence, as the verb "thunder" can evoke negative emotions and can be associated with weapons, which also contribute to destruction. In the following tercet, Andreas Gryphius makes a clear statement, which he brings to bear with the verb "must". "The glory of high deeds must pass like a dream" (V. 9) says that fame should not have a higher importance and also this higher class will be forgotten, no matter how far they hide in their vanity. Verse 10 uses a rhetorical question to address the theatrical play, in which life was seen as a play and man as an actor. It is asked whether the "light man" should pass the "game of time". The metaphor 6 "game of time", which stands for life, illustrates that time had an important role in people’s thinking and that the "game" was associated with life as a play. The author wants to address the hypocrisy of the princely courts, which, because of the veiling, no longer perceived the real misery of the times. The last verse of the first tercet is led by a "sigh" ("Ach!"), which introduces the question of the meaning of life. In this, the lyrical I again involves the reader, speaking in the first person plural and including everyone with the word "we". The last stanza, which is also a tercet, gives an answer to the question of life, emphasized by the threefold anaphora "as". In the 10. verse, an alliteration 7 is used for negative exposition ("shadow, dust"), as well as a hyperbole ("nothingness, [. ] shadow, dust and wind"). "Shadow, dust and wind" are three unpleasant nouns, which can be referred to war once again. The shadow can be connected with life if we take into account Plato’s allegory of the cave, which considers life as a shadow that is so inconspicuous and can suddenly disappear, so that it seems as if it had never been there and as if this life had never existed. To this end, one can also draw on the concept of "bad[n] nothingness," which at the beginning of the 12. verse. The penultimate verse of the last stanza begins again with "as" like the verse before, in order to make clear just this "nothingness" of life. Here the anaphora introduces the comparison of life with a "meadow flower", "which one does not find again".") (V. 13). In a great meadow full of flowers, a single flower is as insignificant as a person’s life and the subsequent loss of it, The last verse finally gives the author’s conclusion, stating that no one has yet truly perceived what will endure for eternity. This last verse contains an alliteration, which is followed by the adjective "eternal" ("[. ] wants what is eternal [. ]"). This can be linked to the soul, as it is the only thing that remains in the afterlife.

Since the poem quickly gives the impression of violence and transience, it can be placed in the baroque period from 1600 to 1720. Andreas Gryphius wrote this sonnet in 1637, exactly during the 30-year war, which lasted from 1618 to 1648. Thus, it is adorned with violent thoughts and follows the vanitas idea. He interprets his poem in such a way that it can be seen as an invitation to reflect, resp. to consider that one must die, i.e. to follow the statement of the memento mori. The antitheses 8 "What now . is tomorrow . " can also be connected with the notions of Fortuna and Vanitas, as they say as much as: "Today you may be lucky, but tomorrow everything will be forgotten / gone."
Thus, my interpretive hypothesis has been confirmed, but can only be extended to the extent that one should not see oneself lost in torment and war, but as the last verse makes clear, should enjoy one’s soul, which will continue in the afterlife.