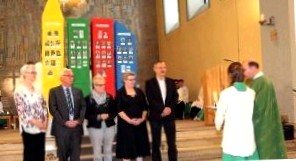 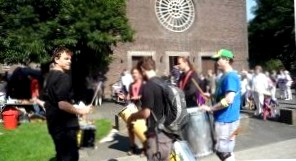 For the past year, the St. Barbara in the north of Duisburg new ways. The Essen diocese wanted to close the parish, now the laity are organizing everything themselves. Now the pastor has also been adopted. A visit to the project parish.

The mood at the Barbara festival is good, relaxed and cheerful. Finally, the new project community has something to celebrate these days: "Birthday, we have turned one year today," Angelika Hoffmann, the chairwoman of the Forderverein St. Barbara. She has been fighting with others to keep parish life going. About 60 volunteers have been organizing parish life in five different pillars for a year: Some take care of liturgy and services, others of celebrations and events, and another group is responsible for deaconry and social projects such as a meal for the needy. The spokespersons of the five pillars meet regularly at the so-called "round table" to discuss what is currently pending and being planned in the parish.

Angelika Hoffmann is quite satisfied with the first year: "We have tried to move a lot, tried to address many people, which we have also succeeded in doing. But there is still a lot to be done, because there is always something new that comes along and develops further. That’s the beauty of it, we can’t see an end point, new people have to come in, old things are simply dropped and new things are created."

The cooperation between the volunteers and their pastor Thomas Pulger has worked well over the years. But in the future, the laity will have to do without him and will take over the leadership of the parish themselves. On Sunday, Pulger was the last full-time employee to be dismissed. For him, however, the new model has already proven itself: "Many areas, whether it concerns church services or the social work that is done here, the diaconia – there are many things that are now planned and managed completely independently. This has already had a very positive effect on the project community, because an understanding has grown that volunteer work is valued by the community and by the people who get involved."

For Pulger, the five-pillar model also has advantages for day-to-day business, because volunteers can choose their area of work individually according to their motivation: "The work groups relieve the burden on the individual, because he can decide on a particular area."

And even if some are still skeptical about whether the new concept can work, most are happy that the community life in the north of Duisburg continues at all: "When people get involved like that, I think it’s great," says one visitor to the festival. And one visitor says: "If the church were really to close, I think that would be the better solution, because then you would be kind of homeless all of a sudden."Another guest is also impressed: "They actually finance themselves, this is a very large community, many neighbors are also here, and they have many projects. I think it’s great, even if it is unusual."

Fundraising is going well at the moment, says Angelika Hoffmann from the support association. The most difficult thing, however, is to motivate the volunteers again and again and to find new helpers. The diocese of Essen accompanies the project and has repeatedly advised and supported the lay people in the past months, explains Michael Dornemann from the pastoral department there: "The question again, how do I deal with conflicts, how do we moderate, how do we lead groups, meetings, which contents are important again, suggestions also again for the design of church services?."

Farewell to the pastor

But only now, after the departure of the full-time pastor, will show whether a parish can function under volunteer leadership, says Dornemann, who is confident: "They are well prepared, although the test comes now, but we also accompany it well through our pastoral department here in the diocese, so that they are not left alone. And I am also quite confident that this will now also work."

The pilot parish is initially scheduled to run for three years, but already other parishes from Germany and abroad are repeatedly reporting wanting to learn more about the Duisburg model. And in view of the shortage of priests and falling income and membership figures in the Catholic Church, the Essen diocese is also aware that voluntary commitment will become increasingly important. That’s why Angelika Hoffmann of the Forderverein St. Barbara is convinced that this can also be a model for other parishes, if the commitment is right: "Always look locally, what do I have, which people do I have, what do I want to do, what do I want to maintain locally, and work on that. And then motivate the people for it, you don’t always have to have, I say, the huge concept."

In any case, it is confident that at least parish life in St. He also said that the St. Barbara parish will continue in the long term – even if the Eucharist with a priest is only celebrated on Sundays.