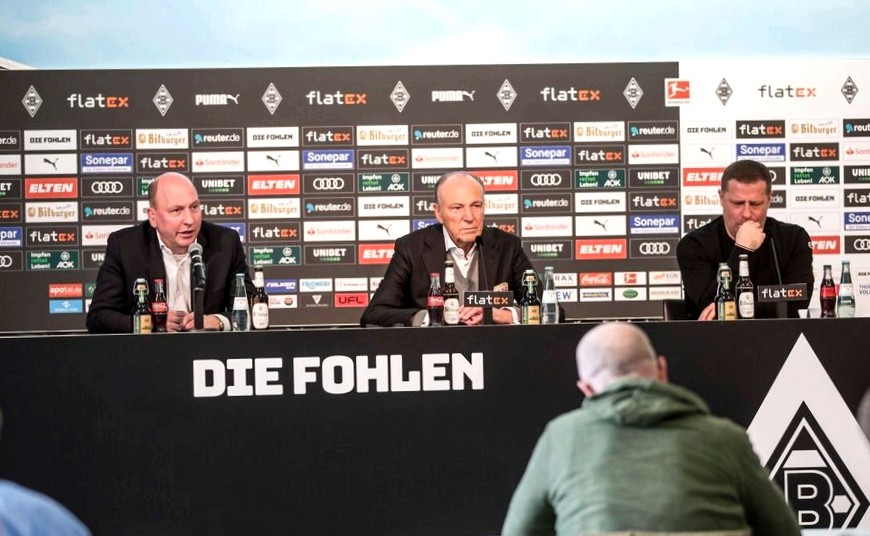 Max Eberl (r) quits after almost a quarter of a century as a professional soccer player and official at Borussia Monchengladbach.

Max Eberl (r) is quitting after almost a quarter of a century as a professional soccer player and official at Borussia Monchengladbach.

Max Eberl probably deliberately chose to step down from the big stage.

"I know I won’t bring back the fast pace, I won’t be able to stop this restlessness that is around all of us. I can stop them for myself, and that’s what I’m doing at the moment", said the 48-year-old. Almost a quarter of a century as a professional soccer player and official at Borussia Monchengladbach and in the hectic billion-dollar business of soccer have worn Eberl down.

Eberl showed gratitude on the one hand, but on the other hand also criticized what he once called his life. Thus the excesses in the social media, in which insults, judgments or condemnations fall, before one "has not even said a word". Whether Max Eberl will return at some point is an open question.

Others before him found their way back into the spotlight after also clearly audibly articulating the negative impact of their work in soccer. For example, Ottmar Hitzfeld on his time out after his time at FC Bayern in 2003 or Ralf Rangnick in 2011 at FC Schalke 04 . "I felt that the whole thing was coming to an end – because you no longer have the energy or the strength", Hitzfeld once said on Sky. Hitzfeld wanted to take a sabbatical after winning the CL final in 2001, but Uli Hoeneb forbade him to do so. Hitzfeld also turned down an offer to coach the German national team. Later he had "again appetite" and became Swiss national coach.

Rangnick revealed he was suffering from burnout – and after his return successfully led the RB Leipzig project. Now he is team manager at Manchester United.

Debate about pressure in professional soccer after Eberl resigns

Eberl’s performance is assessed by sports psychiatrist Valentin Markser as a gesture of great strength. "It’s not mental strength when you jump off a 10-meter tower or continue boxing with a double fracture of the jaw. For me, talking about yourself and your feelings and keeping an eye on them is the real mental strength", Markser told the German Press Agency on Saturday.

Markser, a professional handball player who was once German champion and European Cup winner with VfL Gummersbach, sat on the board of trustees of the Robert Enke Foundation for eight years. The former national keeper Enke suffered from depression and took his own life in 2009. Markser founded the German Society for Sports Psychiatry and Psychotherapy (DGSSP) and has been working for years to ensure that his discipline becomes an integral part of prevention in professional sports.

Sports psychologists, like doctors or physiotherapists, are an integral part of professional clubs. Only are sports psychologists, according to Markser, who "do outstanding work", mainly busy with competition preparation and mental training. "They are not trained for mental health", Markser emphasizes. He says that only sports psychiatrists. For the psychiatrist, prevention and early detection are essential for a long career, as is stress management in the physical field.

"This is insanity. We’re all on a merry-go-round. And it’s spinning faster and faster", Sebastian Deisler had once declared. Once the greatest hope in German soccer, he suffered from injuries and depression – he ended his career in 2007 at the age of just 27.

Also notable in recent years were the deliberate sabbaticals of Pep Guardiola (2012) and Thomas Tuchel (2014). World stars Naomi Osaka (tennis) and Simone Biles (gymnastics) gave deep insights into their mental lives during their retirements. This is not the only reason why Valentin Markser sees himself strengthened in his belief that sports psychiatry "in the next 10, 20, 30 years" will have a significant impact Become part of overall medical care in professional sports.

Nevertheless, says Markser, the "destigmatization" of love is still a long way off Despite prominent events such as Osaka or Biles, psychiatry has been tough. The DGSSP will be offering a seminar in March (4. to 6. March) at the Olympic Museum in Cologne, the training course "Fundamentals of Mental Health in Competitive Sports" to. Invitations were sent, among others, to all 36 clubs of the 1. and 2. Soccer Bundesliga. Feedback on this according to Markser so far: none.