The Eyeball is composed of three layers like an onion skin: the outer, the middle and the inner eye skin.

Go to outer eye skin belong to the Sclera (sclera) and the Cornea (cornea). The sclera surrounds the entire eyeball except for the anterior region as a forming and protective cover. In the area of the optic nerve it passes into a hard meninges, which encloses the optic nerve, in the anterior part of the eyeball near the iris into the vascular, transparent cornea. The anterior, visible section of the sclera is surrounded to above the corneal rim by the Conjunctiva (conjunctiva) superimposed and protected. This also covers the inside of the eyelids, to which it is firmly attached, while the part of the conjunctiva facing the eyeball lies only loosely on the eyeball. 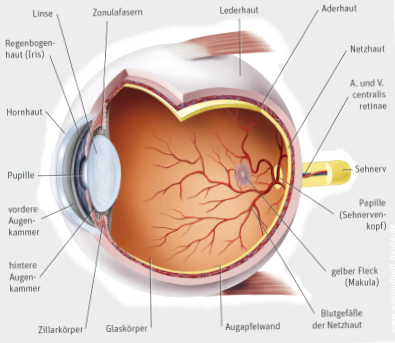 The eye in section. Light rays pass cornea, pupil, lens and the vitreous body, which occupies two-thirds of the interior of the eye, before they meet the light-sensitive retina. The highly sensitive retina is enclosed externally by two protective and supply layers, first the choroid and then the sclera.
Georg Thieme Publishing House, Stuttgart

The choroid is a black-brown pigmented skin and is adjacent to the inner part of the sclera. It contains numerous blood vessels, which supply the retina (retina). Due to the embedded pigments, the choroid acts like the wall of a darkroom and prevents light rays outside the pupil opening from entering the eyeball. Light rays, after reaching the sensory receptors of the retina, are absorbed by the choroid. This prevents light reflections within the eyeball.

In the anterior eye area the choroid merges into the ciliary body. It consists of connective tissue processes, whose fibers suspend the eye lens in the center of the ray path (the area where light enters the eye), and the annular ciliary muscle. By the tension of this muscle the Suspension fibers of the lens (zonula fibers) relaxes. The lens, being elastic, then assumes a spherical, d.h. more curved shape and its refractive power increases. In this way, the optical apparatus of the eye changes from distance vision to near vision. The adaptation to different distances is called Accommodation denotes.

The connective tissue processes of the ciliary body are rich in blood vessels in which the aqueous fluid formed. It fills the part of the eyeball in front of the lens, which is divided by the iris into a large anterior chamber of the eye and a small posterior Ocular chamber is subdivided. On the one hand, the aqueous humor supplies the lens and the cornea with nutrients, and on the other hand, it serves to build up the intraocular pressure. The eye is largely composed of soft tissues such as the Vitreous body and fluids. The intraocular pressure together with the sclera ensures that the eyeball retains its shape and size and does not collapse like a sagging balloon. Normally, the production and outflow of aqueous humor are in balance, so that the intraocular pressure is always the same: about 15 mmHg.

The aqueous humor flows out of the anterior chamber of the eye through the trabecular meshwork (trabecular meshwork) in the chamber angle (the angle formed by the iris and cornea) in the Schlemm’s canal and finally via the venous system.

The iris (iris) is the visible colored part of the eyeball. It has a hole in the center: the Pupil. The iris acts like the diaphragm of a camera: it adjusts the pupil width to different lighting conditions. With increasing brightness, in the context of near vision as well as with strong tiredness, the ring-shaped fibers of the sphincter pupillae muscle Reflective together. The pupil is thus constricted and the incidence of light reduced (Miosis). In contrast, when stimuli are reversed, the radially arranged muscle fibers of the iris, the Musculus dilatator pupillae, and the pupil dilates (Mydriasis).

Many drugs have an effect on the pupil: the ophthalmologist, for example, uses drops containing the active ingredients homatropine or phenylephrine to dilate the pupil for examination of the back of the eye. Opiates, on the other hand, cause the pupil to constrict.

Go to inner eye skin includes the retina with the sensory receptors as well as the Pigment epithelium. Due to its high content of melanin (brown pigment), the pigment epithelium absorbs the light rays passing through the retina, thus preventing light reflections in the eyeball.

The Retina (retina) The pupil is a complex unit consisting of ten nerve cell layers connected in series. On the very outside are the light-sensitive sensory cells, with their end members immersed in the pigment epithelium. It is divided into cones and rod. The cones are responsible for Color vision during the day, the rods are responsible for the Twilight vision. Most of the six million cones are located in the area of the optical axis in the center of the retina. This area is called Yellow spot (macula). It contains in a depression, the fovea centralis, the place of the sharpest vision. When you fixate an object, the optical apparatus of the eye adjusts itself in each case so that the light rays are focused precisely in the fovea centralis. Thus, in addition to color vision, the cones also produce precise images. For their activity, however, a certain brightness is required. In twilight, the more than 120 million rods distributed over the rest of the retina react.

In the following nerve cell layers there are further cell types, which already carry out the first calculations of the visual information.

The extensions (axons) of the nerve cells leave the eye in the region of the Optic nerve papilla (optic disc, optic nerve head) and form the optic nerve. Its exit site is devoid of light-sensitive cells, it is therefore called the blind spot describes.