Language opens doors and hearts. It is a means of communication and enriches us with the ability to immerse ourselves in foreign cultures and interact with people. Worldwide, more than 6.500 languages spoken, but not all of them are easy to learn. How we rate the difficulty of a language depends on various factors, but most of all on the language itself.

In this article you will learn what 5 languages are for German native speakers are the easiest to learn and why Bahasa Indonesia for us in the first place. Mari kita mulai! (= Let’s get started!)

Before we head off into the far distance, let’s take a closer look at our language. German has its origin in Indo-European or. Indo-European and belongs to the West Germanic branch of the Germanic language group.

English and Dutch also belong to the Germanic languages and have similarities in terms of Structure and grammar at.

Another language group of the Indo-European languages are the romance languages (like French, Italian or Spanish), which in turn are very similar to each other.

It is estimated that there are about 100 million German native speakers and about 80 million German second and foreign language speakers worldwide. 55 million of them live in the EU alone, which is German to the most widely spoken native language in Europe makes.

The German language is above all Difficult language known. This is not least due to three grammatical genders, a preference for long, compound words, unique letters and words that do not exist in other languages (z. B. "Fernweh" or "fremdschamen").

German native speakers on the other hand can be happy. It’s not uncommon when learning a foreign language to realize how much more difficult our own mother tongue actually is – which can be incredibly motivating for learning other languages!

So what are the 5 easiest languages in the world

To help you choose your next foreign language, we’ve put together our top 5 easiest languages to learn.

A language from Southeast Asia? Who would have thought!

Bahasa Indonesia, the national language of Indonesia is one of the lightest languages in the world and can be to be learned very quickly.

Their grammar is relatively simple and with the most important vocabulary you’ll be able to form sentences in no time at all. The following reasons make Bahasa Indonesia the easiest language in the world:

Bahasa Indonesia is a phonetic language, which means that (almost) everything is pronounced the way it is written – similar to German. There are a few exceptions, but they can be quickly internalized. Unknown characters do not exist in Indonesian.

Indonesia is a country that has been shaped by spice trade, Islamization and colonization. This story is also reflected in the vocabulary of the language. There are many words that come from Portuguese, Arabic or Dutch.

Many words in the Indonesian vocabulary also have the same root and are merely modified in meaning with the help of suffixes and prefixes.

Another plus: all words are lowercase.

The Indonesian language is characterized by an incredibly easy grammar:

a) There is no articles to nouns and the endings of adjectives and nouns always stay the same.

b) verbs are not conjugated. Sentences are written using pronouns or auxiliary verbs (like mau = want or bisa = can) formed.

c) Also the tenses are omitted and statements are made with information like yesterday (kemarin), already/already (sudah) or tomorrow (besok) clarifies. Which, by the way, can often lead to (temporal) misunderstandings!

e) There are no singular or plural. words usually exist in the singular. To express the plural, words can be mentioned twice (anak = (a) child / anak-anak = (several) children) or quantity information in the form of numbers or auxiliary words (banyak = much, sedikit = little) are prefixed.

✓ Learn two languages at once with one language

Bahasa Indonesia belongs like Bahasa Malaysia to the malay languages. Since there are only minor differences, they are often treated scientifically as a single language.

The Malay language is the umbrella language for a number of regionally spoken languages in the Malay region and, according to Wikipedia, includes 200 million speakers in Indonesia, Malaysia, Brunei, Singapore and Timor-Leste (East Timor).

English is not the easiest language in the world, but thanks to its status as a World language ubiquitous and for learners most accessible.

English is spoken by most nationalities and is used in (almost) all areas (like music, movies, computers etc.).) Application.

Despite a relatively large vocabulary, she has manageable grammar. There is a single, gender-neutral article (the), which can usually be used for any noun. Words are relatively short and verbs only change in the third person. Also in terms of cases, the English declension-friendly, since it is no accusative or dative gives.

Even if the pronunciation can sometimes be a bit tricky, it points out as Germanic language Similarities with the German language. Many words are similar to each other (z. B. hand, finger, warm, etc.) and verbs that in German have irregular are usually irregularly conjugated in English as well.

There are over 340 million native speakers worldwide, and a total of almost 2 billion speakers from. One more reason for you to include the English language in your language repertoire!

Dutch is often referred to as a Mixture of English and German since all three languages are closely related to each other.

Many Germans understand word fragments and sentences without having actually learned the language. This makes Dutch a very easy language for us to learn and increases learning success.

In contrast to German, the Grammar more logical with clear rules and fewer exceptions. Some case endings are dropped and the sentence structure is similar. Pronunciation and writing are more closely related in Dutch than in German. once you understand the spelling system, you will know how to spell and pronounce words correctly in the future.

It is estimated that there are about 24 million people who speak Dutch – in the Netherlands, Belgium and the Caribbean.

Afrikaans, which can be used in South Africa spoken, is one former Dutch dialect, of the u. a. influenced by Malay, English, and Portuguese has. The language is even even easier than Dutch, as verbs not conjugated and no grammatical genders exist. So, how about a language course in South Africa?? flights to Cape Town start at 300 euros.

Another easy language to learn for native German speakers is Swedish. About 80 percent of Swedish words are derived from the German language. Most of the time, German native speakers can handle the most important grammatical rules understand Swedish texts within a very short time. Only shortcoming: Letters and pronunciation take some getting used to.

In total, there are about 10 million speakers, u.a. in Sweden and Finland. Both are popular travel destinations in Europe. Although many Swedes have an excellent command of English, it is much nicer to communicate in the local language and get "real" tips from locals.

Spanish exudes fire and southern temperament and is not in vain one of the most popular Romance languages. Furthermore, it is not too difficult for Germans to learn, since many words – also like in German – use the Latin alphabet derive from Latin.

The Spanish language has also fewer grammatical irregularities than other Romance languages. Words are – with a few exceptions – pronounced as they are spelled.

Unfamiliar letters and combinations have a unique sound assignment. There are only two articles in Spanish: masculine and feminine. The gender of a noun can usually be recognized by its word ending.

Spanish has a incredibly wide range. After English it is the second most frequently learned foreign language and, with over 570 million native speakers, one of the Most spoken languages.

Spanish is an official language in more than 20 countries and is therefore widely spoken not only in Spain, but also in almost all of Latin America, the USA and individual countries in Africa and Asia.

The difficulty of a language

Whether we judge a language as easy or difficult and learn it accordingly quickly or slowly depends on several factors.

The German language uses the Latin alphabet, which is also used for a variety of other languages.

Generally speaking, it can be said that an vocabulary of around 500 words already enough to deal with everyday interactions with other people.

For more sophisticated conversations is a Vocabulary from 5.000 words upwards necessary.

Obviously, the more words you know, the easier it will be to learn the language. But also the total vocabulary of a language plays a role here.

Grammar is the set of rules of any language, without which a meaningful communication would not be possible. Without grammar, loose, disconnected words would create an opaque mess.

Tenses, prepositions, cases and sentence structure are all part of grammar. The more complex and different it is from the mother tongue, the more difficult it is for us to learn it.

Pronunciation also has a big influence on whether we pick up a language easily – or not.

If the words are pronounced as they are spelled? Are there any unfamiliar letters or letter combinations that require special pronunciation?

A classic example of a challenging and often difficult pronunciation is the French language as well as many Asian languages like Thai.

Who growing up bilingual, usually has an easier time learning a foreign language because of a larger vocabulary and easier recognition of grammar rules. Many bring talent for accent-free pronunciation or develop a flair for language in general. If you want to make learning even easier with a Study abroad connects, has by far the best chance of quickly speaking a new foreign language.

Conclusion one of the easiest languages in the world

No question – every language has its pitfalls and challenges and hardly any of them will come naturally to you!

Whether you find a language difficult or easy depends on the language itself, but also on factors such as your motivation and stamina. The easiest way to learn a language is to already be in the country or to try out your language skills on your next trip.

Which of the above languages do you already speak? Is there another one that you found easy to learn? How about your Indonesian skills? Let us know in the comments! 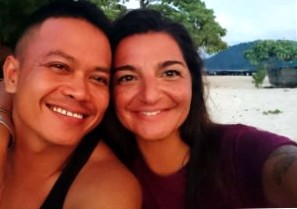 Gunda has a background in diving and tourism and spent several years traveling in Southeast Asia before losing her heart to Indonesia. Here she found not only her new home, but also her great love. After managing a dive resort in Raja Ampat, the idea for her website was born . She now lives as a freelance writer and podcaster with her husband, Hartono, on Morotai, where they plan to start a small self-sustaining farm.
Read more from this author.

An incredible amount of coffee (and the odd coconut) went into this article.

Invite us over for a Bali Kopi so we have enough energy to write the next helpful article for you and all the other travel-loving people out there!

You can decide how many cups of coffee you want to invite us to, just move the bar to the right or to the left! &

DisclosureThis post may contain affiliate links and advertising. There is no additional cost to you. We only recommend products that we use ourselves, that we are 100% convinced of, or that have been recommended to us by a competent person. Advertising and affiliate links allow us to spend the time to design this blog and fill it with love and content. Peace, Love& banana pancake. Your Indojunkie Team.