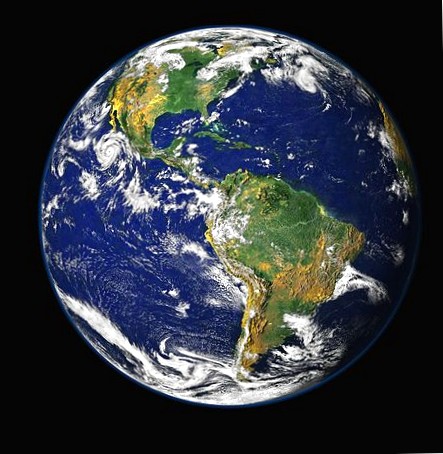 The earth is the planet on which we live. Like the other planets, the earth orbits the sun, taking a year to do so. Once a day the earth rotates on its own axis, i.e. the earth’s axis. This creates day and night for us, because always different parts of the earth are illuminated by the sun.

The earth has the shape of a sphere, which is a little flattened at the poles. The spherical shape is easy to see when you are on the coast. With binoculars, you can observe that a ship "sinks" behind the horizon the farther it gets from the coast. The poles can be seen the longest.

The moon orbits around the earth. It is like a natural satellite. Compared to the planet Earth itself, it is quite large. This is rather unusual for moons. There are about 150 million kilometers between the earth and the sun. In its orbit around the sun, the earth flies almost 30 kilometers in just one second.

To give you an idea of the sizes in the solar system: if the sun were a big gym ball, the earth would be about a cherry and the moon only a small pea. The "earth-cherry" would circle around the "gymnastic ball-sun" with a distance of about 135 meters, the "pea-moon" would be only 35 centimeters away from the "earth-cherry".

To the states of the earth there is an overview of the 197 countries with all Klexikon articles and flags to it.

How is the earth built up inside? 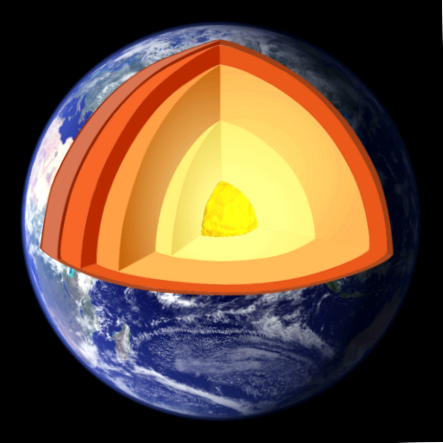 The innermost part of the earth is called the earth’s core. The core is extremely hot and contains a lot of iron and nickel, which is also a metal. The material is compressed here very strongly, because the pressure is very high by everything, which lies above it.

Then there is a large area called the mantle. Here the material has completely different properties, it is also very hot and rather liquid. This also includes the magma. This is liquid rock that comes to the earth’s surface during volcanic eruptions.

The closer you are to the earth’s core, the more solid the mantle becomes again. There is a logical reason for this: from the Earth’s core, the rock is heated and thus liquefies. This makes it lighter. The cold solid rock sinks downwards, while the liquid rock comes upwards. Above it cools down and becomes solid again. Then the rocks want to go down again. So the whole thing is a cycle. But this takes a very long time. More than 100 million years pass before a lump of rock reaches the earth’s crust from the earth’s core.

The earth also has its own magnetic field. It is formed by complicated processes between the solid earth core and the liquid earth mantle. The magnetic field is very weak, but it reaches far out into space. Because of this magnetic field we can orientate ourselves on the earth’s surface with a compass. It also protects us from much of the dangerous radiation from space because it deflects it.

How does it look like on the surface of the earth? 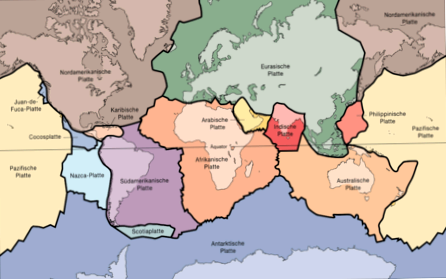 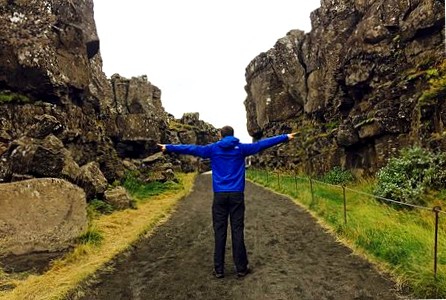 The Earth’s crust consists of large plates that "float" on the liquid mantle of the Earth, much like large ice floes on a frozen lake. At the edges, where the plates collide or slide over each other, mountains and volcanoes are formed. It comes here also particularly often to earthquakes. The science that deals with the earth’s plates and their movement is called plate tectonics.

On the plates of the earth crust lie the five earth parts or continents and many islands. They lie so high that they protrude from the seas. The surface of the earth is covered to two thirds with water. This made it possible for life to develop. Up to now no other place in the universe with living beings is known.

Above the earth’s surface is the atmosphere. This is a layer of gases. It consists of about one fifth of oxygen, which we need to breathe.

How the earth was formed?

The earth is over four billion years old. In the beginning our solar system was only a big cloud of gas and dust and also bigger chunks of rock. By the gravity of the particle formations larger and larger lumps were formed. In many millions of years the earth was formed in such a way. It looked still completely differently than today. It was not a sphere but a shapeless lump and there was no water, no atmosphere and no moon yet.

The "original planet", which later became our Earth, collided with one of the other celestial bodies. This was about half as large as the young earth and is called "Theia" today. Theia broke completely in this impact, the surface of the young Earth was melted and partially ejected into space. Parts of Theia merged then with the earth. That’s why you don’t see any craters from this catastrophe today.

Fragments of Theia gathered in an orbit around the earth. They later became our moon. Compared to the planet earth itself the moon is therefore quite large. Also the moon and the earth are quite close together.

Little by little the hot earth surface cooled down, an earth crust could develop. The atmosphere formed and oceans of fresh water were created. This set the stage for the emergence of life on Earth.