The idea that there is both heaven and hell and different beings living in them has existed for a very long time. Even older is the idea that the earth is populated by supernatural spirits who do evil as well as good. In religion and above all in everyday life, we are constantly confronted with angels and demons, and this exciting topic has inspired the imagination of artists and writers both then and now. But what do we actually know about angels and demons? 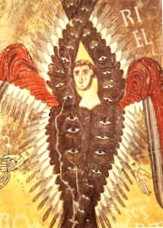 The seraphim are described as angels with six pairs of wings. (Source: Wikipedia)

At Christmas time, angels are ubiquitous as decorative items. They hang as ornaments on Christmas trees, are printed on napkins or decorate candlesticks. There is also widespread belief in guardian angels who walk the earth and protect people from harm. They are considered forces of good and are often depicted as winged figures of light.

Demons, on the other hand, are nowadays mainly good material for horror stories, which is why they are preferably included in movies, TV series and books. They usually represent the evil that the hero or heroine must defeat to save the world. Demons can often take possession of human bodies in such stories, which makes them especially creepy. Some authors are also directly inspired by religious ideas and scriptures or write their own versions of well-known myths that have to do with angels and demons.

Not all angels are the same 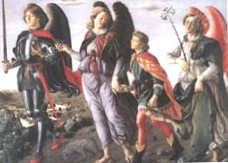 Archangels Michael, Raphael and Gabriel can directly intervene in events in the world. (Source: Wikipedia)

Angels are primarily considered messengers of God. This idea is very old, because already from the times of the Egyptians there are images of winged beings who act as mediators between humans and gods. Also in the Islam one knows angel beings, as for example the scribe angels, which should have each humans behind itself with the left and right shoulder. According to Islamic belief, the scribe angel writes down all good deeds, the other is responsible for the bad ones.

In this country the image we have of angels is Christian, but here angel is not equal to angel! In Judaism and Christianity, different types of angels are assumed, which fulfill different tasks and are also subject to a ranking order. According to the Bible, the seraphim, for example, are at the head of the angelic choirs and are described as beings with six wings. With one pair of wings they cover their face, with the second their feet, and with the third they fly. Their job is, among other things, to protect the throne of God.

Another group of angels of high rank are the cherubim, who are mentioned several times in the Bible. For example, after the expulsion of Adam and Eve, God is said to have set them up as guardians of paradise. A particularly important role is also played by a number of archangels, three of which are especially well known: Michael, Raphael and Gabriel. They protect peoples and religions and take direct influence on events on earth. Besides other groups of angels of high rank, there is also talk of heavenly soldiers, the Elohim. They protect the sky from bad influences of the earth. The simple angels or Angeloi are supposed to be most similar to humans and therefore accompany them through life.

Demons were not originally all evil 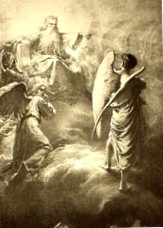 The angel Lucifer is banished from heaven. (Source: Wikipedia)

The word "demon derives from the Greek word "daimon" which means ab, which means "spirit or "influencing the destiny meaning. Originally, the term does not mean anything bad. The term "eudaemonia" used in philosophical ethics for example, means happiness and comes from the ancient Greek "eudaimonia" means there literally "having a good demon". Because originally it was believed that a person who does good and is at peace with himself is controlled by a good demon.

The ancient Greeks believed that all kinds of natural phenomena were the work of demons, but especially processes they could not explain. This included for example the aging and decaying of living beings or the evaporation of liquids. Also in the Orient demons were part of daily life and were responsible for illness and death. In Hinduism, demons are known as opponents of the gods; in Islam, there are the jinns, demonic beings created from fire that can be both good and evil.

Only in the course of time has the idea spread that a demon is a being that instills fear in people or wants to harm them. For a long time, as Christianity continued to spread, the pagan gods that people had previously worshipped were still referred to as demons. It was said that these harmful spirits had taken control of people and thus influenced them to worship them as gods. Today’s Christian teaching, however, sees demons as something quite different: they are generally considered to be fallen angels.

Fallen angels in the Christian faith 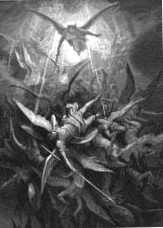 The fallen angels are said to have become demons. (Source: Wikipedia)

In Christian doctrine, the idea is widespread that there were rebellious angels in the kingdom of God, who rehearsed a rebellion against God and were therefore ultimately banished from the kingdom of heaven. Various reasons are given for this. It is often said that the angels did not want to show respect to the newly created human beings. In their eyes, humans were inferior and did not deserve to have the angels fall on their knees before them. Some artists and authors dealing with this subject even go one step further: in their eyes, the angels were jealous because God loved humans more than them and endowed them with free will to boot.

Some think the angels want to disobey God and exalt themselves above Him. Another scripture says that God chose a group of angels to help the archangels create the Garden of Eden. On earth, however, something very human happened to them: they fell in love with human women and fathered children with them. These children were giants who were called Nephilim. God was so upset about this that he drove the angels out of heaven and destroyed the Nephilim using the Flood. 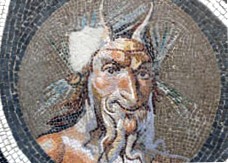 The Greek god Pan could have been the model for the common idea of the devil. (source: Wikipedia)

However, the Christian sources agree on one thing: The rebellious angels had a leader who drew other angels to his side. The archangel Michael is said to have been the one who pushed this angel and his followers out of heaven. This fallen angel, also known as Lucifer, became the devil or Satan according to the Christian conception. Many see in him the evil in person, who moves people, for example, to lie and sin, so that their souls do not go to heaven, but to hell.

In popular belief, people imagined the devil with horns and a horse’s foot, hairy with a long tail. This image of the devil dates back to the times when pagan religions were replaced by Christianity. The gods were simply reinterpreted to fit the Christian ideas. Horned deities such as the Greek god Pan or the Roman god Dionysus quickly became the devil.

Today, the devil is usually portrayed as evil and dangerous in books and films, but he is not always ugly and wears horns on his head. The modern devil has a gloomy appearance, but is often even beautiful and seductive. Sometimes a very different side of the devil is shown, that of the misunderstood angel who still suffers from having been banished from heaven and for whom the viewer or reader can even feel some sympathy.

The eternal struggle between good and evil 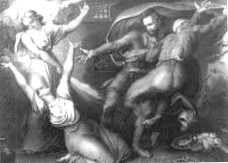 Scene from Goethe’s "Faust": Gretchen is rescued by an angel of God, Mephisto drags Faust with him. (Source: Wikipedia)

There are innumerable stories in which an angel falls in love with a human being or in which angels walk on earth and do good things. And in probably even more stories demonic powers play a role, which must be fought. The great battle of good versus evil has always fascinated people. Thus, the pact with the devil has been and continues to be a theme in stories and movies.

The work "Faust", for example, is world famous by Johann Wolfgang von Goethe, in which the restless and unhappy scholar Heinrich Faust makes a pact with Mephistopheles, the devil: Faust promises the devil his soul should the latter succeed in making him feel true happiness. Thus, Mephisto rejuvenates Faust and helps young Gretchen fall in love with him. Previously, the Lord in Heaven has entered into a wager with the Devil: The devil bets that he can lead Faust astray – God, on the other hand, says that even "a good man in his dark urge" can lead Faust astray nor recognizes the right way.

Many enjoy being frightened by evil and then seeing that good triumphs. Others find it more exciting to see the world – and heaven and hell – not just black and white, but to explore the gray areas as well. Whether you are religious or not, angels and demons have always provided good material for exciting stories and will continue to occupy people’s minds.

Note on copyright: The private use of our website and texts is free of charge. Schools and teachers need a license. You can find more information about SCHOOL LICENSE here.