Within twelve months, a child acquires numerous hand and finger skills, and in the process gains fundamental experience of how things may be. 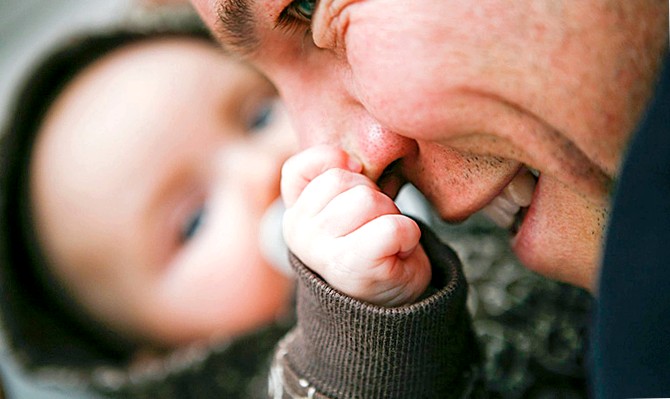 Becoming familiar with hands and fingers

Already the newborn closes his hand firmly around the finger of the mother or the father. This is what is known as the grasping reflex – an innate reflexive response triggered by touching the palm of the hand. This reflex decreases with the development of voluntary grasping and finally disappears completely.

But before your baby can willingly hold and grasp anything, he must first become familiar with the capabilities of his hands and fingers:

During this intensive occupation with his hands and fingers, the child practices at the same time to coordinate his eyes with his arm movements better and better. Around the end of the third month of life, the baby is finally able to hold on to small things for a short time.

Beginning of the targeted grasping

On the most diverse things that you hand to your child, he now tries how he can grasp and hold on to them.

The grasping reflex has now disappeared in most children.

With the ability to grasp and hold on to things, everything within the reach of your child now arouses your child’s curiosity: Whatever he can grasp is taken in his hands and examined closely – put in his mouth, felt, looked at, moved back and forth.

During these "grasping experiences", your child simultaneously makes a variety of sensory experiences:

From these different perceptions while grabbing, your child gradually develops an idea of things while "storing" the grabbing movement itself as a course of action. 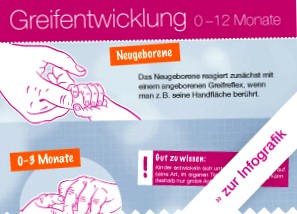 Stages in the baby’s grasping development

The baby becomes familiar with her fingers and hands and learns to use them in many ways. The infographic illustrates the most important stages.

At about seven, eight months, your child can already grasp small objects between thumb and index finger (scissor grip). Once he has grasped a string, for example on his running duck, he can pull his toy toward him.
By the end of their first year of life, children have usually finally become so dexterous with their hands and fingers that they can grasp even the smallest crumbs and lint with the tip of their thumb and forefinger (known as a tweezer grip). At this age, a ball can also already be grasped with both hands.

If your child is probably quite adept at grabbing and holding onto things by the end of the first year of life, it doesn’t mean that she will be able to let go of them in a purposeful way again. It learns this only in the course of the next months.
So if your child seems to be throwing away his toy with violent arm and hand movements, he’s not trying to say he doesn’t like it: he just wants to get rid of the rattle, the stuffed doll, the teddy bear for the moment!