There are myths about the service life of an SSD hard disk. Do SSDs fail faster than HDD storage??

Indeed, the early days of the SSD were not rosy: the first SSD storage suffered from firmware issues and performance degradation. But the development of SSD technology has not stood still since then. A few years have passed and new chips and processes have made technology extremely better.

So how long does an SSD last?

If you ask this question in relevant internet forums, you will usually get a flood of the most different opinions. When considering the expected lifespan of an SSD, the first thing to do is to take a look at the different types of SSD hard disk storage. Three SSD storage types are available to choose from: Single Level Cell (SLC), Multi Level Cell (MLC) and Triple Level Cell (TLC). The English names of the types already give an idea of the difference. For example, the MLC storage type secures two bits per memory cell, the TLC storage type secures three bits per cell, and the SLC type secures only one bit. Pure SLC flash memories have not yet become established because of the horrendous costs.

The following applies to the memory types and their service life: The more data stored per cell, the greater the wear and tear. This means that at the first moment, the lifespan of the storage types can probably also be determined by the write cycles. 3000 write cycles last approximately memory cells of the type MLC. At the first moment, this doesn’t sound like a lot. However, compared to conventional HDDs, the mechanics of SSDs do not wear out during reading. So, by reading data on an SSD, it will not wear out. So it depends on the write/erase operations.

Using "Wear Leveling", translated wear compensation, SSDs have taken another big step towards even more robustness. New-generation SSDs distribute stored data evenly across all memory. This will save all the memory cells in the best possible way. Some SSDs now have a so-called SLC mode. We already know the term SLC as a storage type. Only one bit is written per memory cell in SLC memory. If an MLC or TLC disk runs in SLC mode, then it virtually emulates an SLC memory and initially writes only 1 bit per cell. If the memory is no longer sufficient at some point, then work continues in the normal memory procedure.

So let’s subject the modern SSDs to an endurance test. That is, we write with special tools permanently and at the highest possible speed on these flash memories. SSDs now achieve outstanding results in such tests. Memory cell failures only show up after years. But flash memory can also successfully counteract these non-functional cells. Current SSDs have reserve capacities. These areas of the memory are not available to the user, but defective cells are repaired with them, so to speak. The defective cells are removed from the hard disk during the so-called "Bad Block Management" replaced by the brand new spare cells. The bottom line is that SSD storage cells last a lifetime in this way in normal use.

Can I calculate the lifetime of an SSD hard disk??

The more memory cells an SSD has, the longer it will last. A large storage capacity allows the memory cells to be conserved for longer, as they are not rewritten as frequently. The lifetime of a current SSD can also be calculated with the help of a formula:

Let’s take as an example here z.B. The Samsung 850 Pro. The 850 Pro is an MLC SSD with 3000 write cycles. The capacity of the disk, depending on the design, ranges from 512 GB to 2 TB. The SSD factor indicates the ratio of the real amount of data to the actually written data. A high value of 5 is chosen for the calculation here. In addition, we estimate the amount of data that will be written to the disk per year. If an estimation is difficult, choose a value between 1500 and 2000 GB.

The lifespan of the Samsung 850 Pro in the 1 TB variant then results:

This SSD will probably work for 343 years. This is not a guarantee, but a good prediction. The warranty for the aforementioned SSD is a full ten years. TLC disks don’t have to hide either. The 1 TB model of the Samsung 850 EVO series, which is equipped with the TLC storage type at a lower price, can expect a life span of 114 years.

Is there anything I can do to optimize the lifespan of my SSD??

Not every hard disk tool can automatically also deal with SSDs in the same way. There are some tools especially for SSDs that definitely do good to your memory. Also operating system services as known from conventional hard disks, such as z.B. the defragmentation, are not suitable for SSDs. A defragmentation even proves to be detrimental for an SSD, as it performs superfluous write and erase processes. Sorting data during defragmentation does not help an SSD at all: SSDs access all disk areas equally fast. We recommend the following optimization software for your SSD:

In CompuRAM’s webshop you can find the latest SSDs from Samsung. Samsung recommends its customers to use the in-house "Samsung Magician Software" for optimal maintenance. With this tool you can not only increase the speed of your SSD, but you can also analyze and improve the life of your Samsung SSD. The tool informs you about the drive state and offers various benchmark, optimization and deletion functions. Thus, with the possibilities for optimization, e.g.B. Tune operating system services to the SSD for maximum performance and reliability. 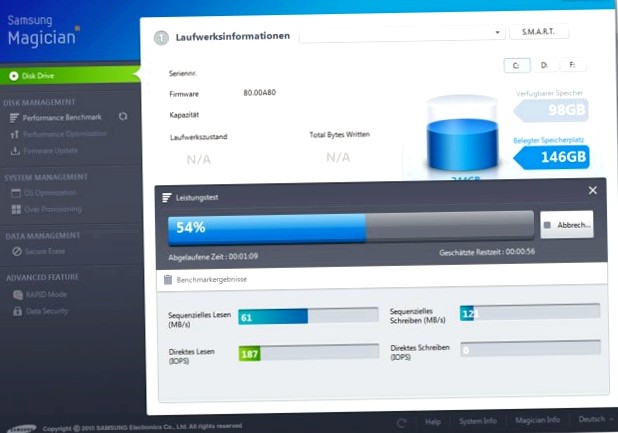 The Magician feature is particularly interesting "Over Provisioning". You can maximize the life of your SSD with this feature. During this process, a certain storage area is not made available to the user. This space is used exclusively for the SSD controller during over provisioning. It uses the area to efficiently store and manage temporary data. Over provisioning thus also supports the two methods presented, wear leveling and bad block management. Especially SSDs with rather low capacity benefit from over provisioning, because this way space for the enhancement functions is guaranteed. Owners of a large Samsung SSD usually have enough space for the management functions of their storage from the start.

In this video, we show you how to use the tools in practice: