So often one reads and hears the term "lion mother. Either because you call yourself that as a mother or because you are given the title. But what does it actually mean to be a "lion mom"?

In my last article "9 months in, 9 months out" I had mentioned that I felt little allegiance to my nickname "little mouse" anymore, as I had truly transformed into a lioness. It was a slow, inconspicuous process that happened so incidentally. I only noticed it when my teeth came into play.

I remember it like it was yesterday. Still a bit carried away by the previous day’s events, I lay pregnant on my osteopath’s treatment bed. I was being nagged by a dog owner and her dog in a frighteningly nasty way. I was in line to pick up a piece of furniture when her waist-high, off-leash dog started jumping on me. Without muzzle. In the furniture store. Pregnant. It was too much for me. The lady did not show any understanding, but started to scold and to come very close to me. I was really a bit scared at this moment. I didn’t manage to tell her how I felt, but just stood there. Maybe it was the increased sensitivity in pregnancy, or just the "shock" of.

When I told my osteopath about this, she said words to me that I think of often today: As a mother, many more situations will happen to you in which you will have to stand up for yourself and your child! Don’t worry, the strength and security will come on its own! One becomes there correctly the "lion mama".
She was right.

National Geographic – a look into nature

In a nature documentary or on an African safari, you can see lions in their natural habitat. The mother lion not only keeps a close eye on her babies, but also always has an eye on her surroundings. Her babies often romp wildly, biting her ear or asking her to play along. She keeps calm in the hustle and bustle and patiently allows herself to be trampled on. If the babies are thirsty, they are allowed to go to her teats at any time. If a baby behaves too roughly, it is put in its place firmly but lovingly.

So the lioness mom is quasi a multi-talent, an all-round provider and basically quite relaxed. Except when danger threatens. Then you do not want to be near her. She protects her babies and family. Those who disturb the peace feel their roar or their teeth. She not only protects her family, but keeps them healthy and together.

A lioness defends her children with her own life in case of emergency and stands up to the father or pride leader if he wants to harm the little ones. But she is also calm in dealing with the little ones, when she notices that other lionesses are good for her children.
She has found a good balance between defending and letting go. And so the little ones can become the kings of the animal kingdom.

I have to say, when I read it like this, I might as well just replace the term "lioness" with my name. So it is true, this is indeed ME! A lion mom.

Never thought I would have so much strength and calm at the same time. When I wasn’t a mom myself and saw other moms, I admittedly often thought to myself "wow, how exhausting". How can she keep calm while her child is "acting up" like that?? Where does she get this strength despite sleep deprivation and constant work?

Now I know, my osteopath was right: This comes all by itself! Nature is simply wonderful. How she arranged it all. A perfect interplay of hormones and primal instinct. I never thought I would be so calm when my little dwarf rages through all the stores and makes a mess. Yes, even enjoy it! There is no better feeling than sitting in the chaos and knowing that there is a wonderful reason for this mess: my daughter.

I never thought I would be able to accomplish so much, when I already had the feeling of being totally "busy" without a child. I still have to smile about that now. Lion powers come out in you that you didn’t even know you had! 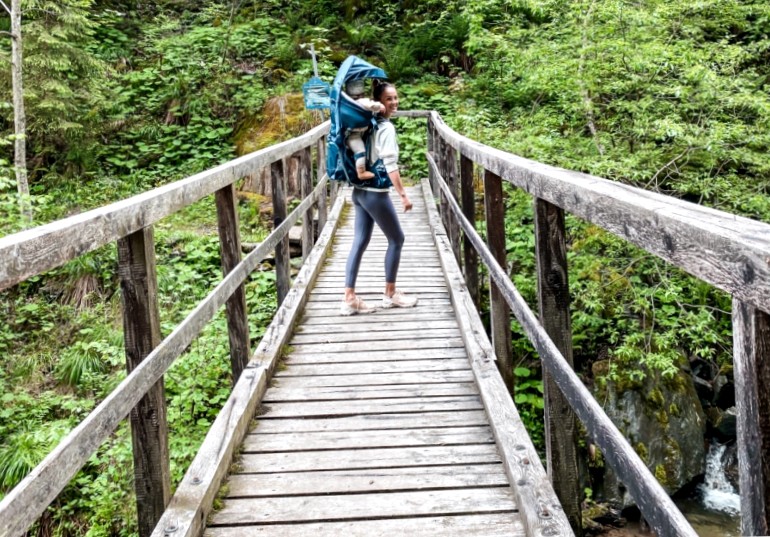 The lion mom in the family jungle

I also notice the change strongly in the social context. The protective instinct runs in permanent mode. There are clear rules in our "pack" for the safety and harmony of everyone. Those who can’t or don’t want to stick to it, unfortunately, can’t play the game. What is healthy boundary setting and defining values sounds totally hard on the outside. I know. Especially for the extended family, some things may often be incomprehensible. I think anyone who has kids knows this issue.
Here I sometimes have to remind the lioness in me to communicate things very gently, so as not to scare anyone off. The roaring often sounds more dangerous than it is, if you know what I mean.

The lioness in each of us

While we are on the subject of setting limits, I would like to tell you something else. Something that is very close to my heart.
This lioness or lion mother, which I was allowed to discover and live in myself, is in all women. No matter if mother or childless. We women are allowed to live them all. Yes, let them live!

There is incredible power and wisdom in a woman’s intuition and inner strength. If we allow ourselves more to not only live these, but celebrate them, we can collectively do quite great things! We may be role models for little girls who later become lionesses too. Make them understand that being a woman is a privilege and something wonderful!

When a woman is in tune with her inner voice& of her soul, then she is completely in being, in the here and now. And that radiates an incredible amount of calm and rubs off on everyone else.
So we women may activate our inner strength and at the same time live the serenity and playfulness. We are allowed to set boundaries confidently and respectfully and do not have to apologize for it.

I owe it to my daughter, who by the way is of the zodiac sign Leo, to have discovered the lion mother in me.

It is she whom I want to be an example for. To whom I want to show that I stand up for them, no matter what it is about. That I stand behind her and defend her. I would like to encourage them to be courageous and self-confident and to discover life with fun and joy. Being a little crazy and wild. Creating a pack that stands behind it, but most importantly, always standing behind itself! That she never forgets her spirit of discovery and courage and unapologetically takes from life what it has to offer!